I’m so pleased that Whose Line is it Anywhoo is back up after a couple month hiatus. I’ve got a contribution up there today, so go check it out, then check back with us tomorrow for new Violent Blue!

Oh my GOD these are hard to make….. 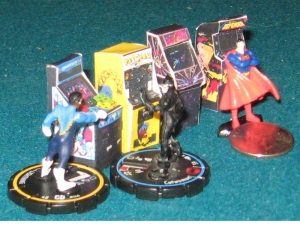 I’d really like to build a Heroclix arcade but I can’t do more than one of these at a time…and a good arcade would need at least a dozen games.  However, after the games are done a couple of pool tables, token machines and a snack bar should be easy.

That can only mean there’s a new Violent Blue up.

You can find it here : http://violentblue.thecomicseries.com/comics/234

Crap. I knew something was wrong the instant I saw the photos insted of a comic.

Since almost the beginning, I’ve followed the comic Two Lumps. It’s listed as one of my influences over at Violent Blue and I’ve grown fond of the two kitties that are the main characters. It probably wasn’t a year ago when the cat that Snooch was based on crossed the rainbow bridge. It seems that Eben recently joined him.

We’ve been through this. We put Lucy to sleep when her body began to betray her. We set Moses free when he lost control. It never gets any easier, not even when it’s someone elses. So when I finished reading the days post, I walked back into the library and cried.

Violent Blue won’t be doing a tribute or any refrences; Two Lumps has it’s own following and I don’t want to exploit a tragedy to drive traffic to my own site, but I’d be remiss if I didn’t mention it at all and offer my deepest sympathies to Eben’s mommy and daddy.

I see Green Lantern is getting pounded by the critics – even the comic media is ripping it apart. That’s a pity, because it’s not nearly as bad a film as they make it out to be. I stand by my statements, It’s a great GL movie, it’s a good comic film, but not a good blockbuster. I think the biggest disappointment is that for a 300 Million dollar film, we don’t realy see that money on the screen. The CGI is subpar in places, the sets aren’t that extraordinary, and there’s actually too much green screen. It ends up feeling like a direct to video movie than a summer night out at the theatre. Still, I can’t believe that writer Mark Millar called this “The worst superhero film ever”. Did he miss Batman and Robin? Perhaps he wasn’t aware of the Nick fury movie starring David Hasselhoff? Really? Green Lantern is worse thant the 1990 Captian America???

Hmmmm. I think there’s a comic strip in all of this……We’ll see what happens in Violent Blue on Monday.

A new Violent Blue is up. The most disheartening thing about this strip is I’ve actually been told this; “God only asks for two hours each week.” by a pastors wife no less. No wonder that church isn’t growing.

SO I watched green lantern’s numbers this weekend. Not bad, but still a weak showing. People are comparing the weekend receipts to X-Men : First Class, but that’s not really a fair comparison. X-Men is the fifth in a series and may well be suffering from a bit of sequel fatigue. It’s also the first one without the most beloved character (Except by me), Wolverine. GL on the other hand is a brand new movie with a character being seen by the general public for the first time. It’s supposed to be the beginning of a series, not the ending. A more accurate comparison would be with Thor, which made about a third more in it’s first weekend, and was to be fair….a better movie. This is coming from someone who likes Green Lantern and doesn’t actually care for Thor as a character.

On the whole, I’m not totally pessimistic as to wether or not we get more GL movies. We got a second Garfield movie after week profits on the first one, and the toys are selling well enough that I still can’t find an Abin Sur on the shelves (I want to customize him into a little TV Flash). Anyhow, I did my part. I saw Thor at the Palace and paid 3.00 to get in. I saw GL at a big movie theater and paid more than twice that to see it and bought a figure. The rest is up to you guys. Green Lantern week over at Violent Blue is over!

Todays Violent Blue has one of my favorite lines ever.

It’s not a good summer blockbuster.

There’s no mainstream appeal, if your’e not into comics or superheroes, there’s nothing here for you. I find this distressing, because it’s this kind of thing that will kill it at the box office. We watched it in a half full theatre and I know from listening to the crowd that a lot of them were fans.

The real shame is that’s I really want another of these. The entire cast was perfect. Thre wasn’t a single misstep in casting any of the characters. I believed that was Hal and Carol and Tom from the word go. The chemistry between the main three was ideal. But I don’t know that the numbers will justify another movie. Moreover, if there’s a sequal, they need ot bump up the FX budget and get rid of some of the cheaper looking CGI.

We’ll be watching the box office numbers this weekend to see what happens.

New Violent Blue up, and as much as I hate to admit it, the Squirrel has a point.

Or is it? these two blogs give very well thought out reasoning why they arn’t really loooking forward to it. the new Red Robin costume alone has me shaking in my boots.

As we left, my wife said something that really resonated with me; that she didn’t care for the beginning of the film but liked it by the end. This movie has a good third act, however, it’s amost likethe filmmakers were instructed that you have to tell this juvinile stor on the front end before you can actually tell the story you want to at the end. It’s a pity too, because there’s a lot of stuff they really could have followed up on with the relationships, the failed business and trying to get your passion for something (like baking) back.

In the end, I really think I just wasn’t in the right frame of mind for this movie. I was expecting a road trip. I was expecting “The Hangover” with girls.  There’s a lot more of a tragedy to this. Not a black humor, but a depressing one. As it is,  I empathized far too much with the main character. This is not a film to watch if you are feeling alone.

It’s not a BAD chick flick, (not the offensive swill that Lifetime constantly churns out)  it just spends too much time in a style of comedy I don’t really like. I don’t think I’ll be buying it, but my wife probably will, it made her laugh.

I think I’ll wait until Monday and laugh at a  new Violent Blue.

As a follow up from Wednesday, we’ve got a new Violent Blue up today!

You can view the strip here ; http://violentblue.thecomicseries.com/comics/227

Still doing some facelifts to the site. Set up more social networking and am thinking about adding an info bar along the right side.

Batman and the DC Reboot

Check out the article over here : http://geek-news.mtv.com/2011/06/06/dc-announces-the-new-batman-family-of-titles/

There’s a lot of good here. No more Dick Grayson pretending to be Batman. A much better costume for Batgirl. The whole batman Inc. seemed to be a corner that DC had written itself into and this is a prime chance to extricate itself from that mess.

On the other hand, there’s the return of Barbra Gordon as batgirl. I realize DC has had a hard time figureing out what to do with Batgirl as a character since Barbra was crippled. The problem is Barbra was far more interesting (and effective) as Oracle (A character I might remind everyone that was created for John Ostrander’s little fringe Title “Suicide Squad” – a title that pererpetulay gets no respect) so returning her to Batgirl status sure seems like a step down for me. It also means the virtual dismantling of Brids of Prey; sure there’s a new Birds title out there, but it sure dosen’t look like any version I’ve ever seen or cared about. Birds is really about Barbra’s relationship with Dinah, and later on with Helena. The Oracle-Black  Canary-Huntress-Lady Blackhawk lineup was a close to perfection as I’ve ever seen, especially being post-Chuck Dixon (because let’s face it, when he leaves a title, that’s when it usually turns into junk: Punisher, Nightwing, Green Hornet to name a few)

So I approach the Batman reboot with cautious optimism, rather than the outright disdain I have for the Wonder Woman and Superman relaunches. We’ll see what happens in august and I figure by October we’ll know for sure if DC is still worth any of our attention or not.

New Violent Blue is up.

Now there may be some of you out there that are wondering to yourself, “Surely he hasn’t actually BEEN in this situation has he?”  Not only has this happened to me, it’s happened more than once.

Look!  I’ve got a guest comic on “Truffles!” Go check it out!

So, Master Chef starts again tonight and we’re making fun of it over at Violent Blue. We watched it last year, but really, it’s pretty awful. I like cooking shows and cooking competitions, but this just doesn’t do anything for me. It’s funny, while I like Gordon Ramsey enough to have an autographed photo in my kitchen, I have to ask….does he even cook anymore? It seems like he’s more a TV personality than what I’d consider a real chef.

The Costume Means Everything 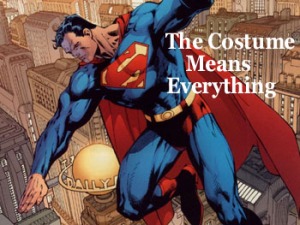 Just found this. With the pending DC reboot coming, the controversy over Action 900 and the change in the Superman costume in August, I think this is significant.

More X-Men goodness in today’s Violent Blue. Of course, I’m not actually going to see the new X-Men movie this weekend….I’m going to see the original Sleepaway Camp at the Cedar Lee instead.

You can visit us over at http://violentblue.thecomicseries.com/comics/224

New Violent Blue is up

If you’re not into comics, you’re probably going to be lost by panel 3. en.wikipedia.org/wiki/Badger_(comics) To this day I think Mike Baron’s Badger was one of the funniest, most innovative things I’ve seen in superhero comics, especially as it was usually carried by the more “mainstream” indie publishers like First, Image and IDW. Unfortunately it’s a property very often overlooked even by those into the comic scene. You can frequently find the old issues in discount bins and IDW did some beautiful reprints not to long ago. The next time you’re in you local comic shop, give Badger a try (And mabey pick up some Jon Sable : Freelance while you’re at it).

You know what? I like Mountain Dew better with Corn Syrup.