Had a good day at the art show promoting Violent Blue. The Art Machine worked out (mostly) and I handed out a bunch of business cards, as well as selling a couple of books. Interestingly enough, I also ran into an old friend I haven’t seen in over 20 years. He had a table set up one booth down. The strangest thing to happen to me though, was just before the art show…when I stopped by Family Dollar to get tape and the clerk insisted on discussing Superman with me for about ten minuets (after seeing my shirt). Hope to see some of my visitors from yesterday over at the site, new strip is up! 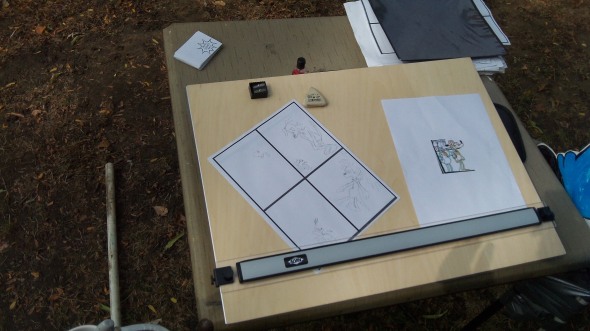 Got a new strip up today at Violent Blue. We’re jumping right on the bandwagon with all the other disgruntled Facebook users….

I see that no one has taken a stab at that Whose Line caption yet. I feel really bad about that. Usually I can whip up two or three, but just haven’t had any inspiration over there. I hope someone can throw a strip or two up there before Ben has to change it.

However, we do have a new Violent Blue up, talking about how Christians seem to find each other in the strangest places. I was a little surprised the first time this happened at The Chamber Nightclub, but at this point it no longer freaks me out. It’s not just clubs either…I find the people of faith at Horror cons, comic shops, film and art festivals…and it’s never when I’m expecting it.

Speaking of comic shops, one of the guys I was playing Heroclix with Monday night told me there was a new one out in Lorain, so I slipped out there this week. Not a lot of local places sell modern Heroclix singles so I really wanted to check out the selection. The place is nice, clean and friendly, in fact, they were kind enough to hook me up with that FCDB Green lantern I missed out on! I’m thinking of stopping out there for game nights on the off weeks I don’t play at Warzone (Like the week of my wife’s monthly game night). Check out Get ‘Em Comics at this address :

Finally, we got Taversia Top list back up on the comic site, so do me a favor and vote me up a bit over there huh? I’ve got some lost time to make up for.

Whose line stumps me

The new caption over at Whose Line is it Anywhoo is indeed up, but “Don’t Quit Your Day Job” is a Little too much like “Maybe it’s time for a new job” that we just did a few months ago, and I used all my ideas on that one. You may have stumped me on this one Ben.

In the mean time, I may post a couple of pages from teh Whose Line project I’m playing around with….a single story, but with each page using a line from the Whose Line submissions. I’m a page or two behind, and I actually have one strip that goes before the first one I did…yeah it’s confusing. You didn’t expect anything I do to be simple did you?

New Violent Blue up today, and while we take a swipe at bad tomato movies over there, I’m thinking about one of the stars of the film (return of the killer tomatoes).

You know, I used to like George Clooney, but he hasn’t been funny in anything since “One Fine Day”. These days his rider for acting in a movie includes a little “beach hut” outside his trailer, a landscaped garden, and a basketball court (A half court I’m sure). No wonder it costs 11 dollars to go to the movies. Clooney turns me off these days because he’s gotten a little too full of himself. It’s a good idea to remind him where he came from with movies like this and “Return to Horror High”.

Return of the Killer Tomatoes Also has another thing going for it, it features John Astin (Gomez from the Addams Family, Buddy from Night Court, heck, he even played the riddler once on the old Batman TV show) who would go on to reprise his role as a mad scientist. The movie also breaks the fourth wall a lot as it satirizes product placment in films.

All in all, Return is actually a very fun film, though don’t expect it to bear much resemblance to “Attack of the Killer Tomatoes”. We won’t get that untill later installments (there’s four movies in this franchise. Can you believe it?)

You can find the new strip here : http://violentblue.thecomicseries.com/comics/268

I wonder if Whose Line has a new caption up yet?

I don’t really want to dwell on “the New 52”. I’ve stated elsewhere that it feels like DC has been taking over by Image comics circa 1991. That feeling hasn’t changed…if anything, it’s only increased. However a couple of things do bear mentioning;
BATGIRL
It’s a pity that some fanboys/fangirls have never gotten over Barbra Gordon not being Batgirl – so much so that she’s been returned to the mantle. I personally think she was far more effective both in the scope of her activities and thematically as a story when she was the crippled Oracle. It’s worth noting as well, Barbra was Oracle for longer than she was Batgirl. She spent so much time under the shadow of batgirl that we sometimes forget that. The new series essentially erases Oracle from history, stating that Babs was paralyzed for about 3 months. I get the impression we’ll have an explanation for that in upcoming issues.
SUPERMAN
I didn’t expect to like this and I was right. We don’t need to make Clark Kent into Peter Parker. I don’t LIKE peter Parker, but Clark Kent is my hero. At least he used to be…
I’m not really a fan of the costume either, though I’ll grant this; it looks kryptonian. I just think it would look better on a different kryptonian. By the way, what’s all this rejoicing over him losing the red underwear on the outside of his pants? It’s still there, it’s just the same color as the pants. I understand it if you plan on eliminating the briefs, but if you aren’t getting rid of them, why bother just changing the color scheme? All in all, the costume just doesn’t WORK for me. In fact, it’s one of the few redesigns that doesn’t. I like the new Wonder Woman costume. I like the new Batman costume.  I don’t get all the armor on EVERYONE in the DCU, (back to the Image comics feel) but I can deal with it…at least for a while.
JLI
I like the idea of the JLI existing along side the JLA as a separate entity controlled by the UN. I just wish someone had this idea about ten years ago or so. Too late now, not funny enough and Dan Jurgans is heading up the title. Three strikes and you’re out.
I feel like I MIGHT just come around to liking a lot of this stuff if I just give it a chance…except that’s the problem. Why should I have to WORK at liking it? Why should I stick around and slog through the dreck that this reboot will be mired down in (for at least the next six months while everyone get’s their footing and establishes a tone) while waiting for something to MAYBE emerge? No, I think, for the foreseeable future, I’m done with DC. I’ll be back when everything reverts to original numbering.

As far as my other pulls this week, I though I’d give Dynamite’s new Robocop Terminator series a chance. Run. Run as far from this one as you can. interesting concept, but no story, and the art is almost cartoonish. It’s an embarrassment. A really dynamic artist could have save this and won points for the ain’t-it-cool factor, but this team they’ve got on the book belongs in the newspaper funny pages. ugh.
On the other hand, The Lone Ranger still hasn’t failed to thrill me. I grabbed the fourth Lone Ranger and Tonto special. They’re doing a piece I’ve seen done with Batman a couple of times (They just did an animated version of a 70’s story like this in Gotham Knight) where you take different accounts of the character and try to reconcile them, showing different facets of the hero. The Lone ranger comics are simply the best thing going right now. I know that I’ve said it before, but it just never stops being true.

Okay. Off to draw some Violent Blue. See you Wednesday.

There’s a new strip up over at Violent Blue. We’re almost out of this story arc, but f you’d prefer superhero antics, you can also check out the new strip up at Whose Line Anywhoo. Bonus points if you can figure out where the Joker’s speech comes from.

and the new Whose Line here : http://www.whoseline.thecomicseries.com/comics/151

So, predictably I’m sure, I’m not impressed with Justice League #1. It almost feels like I’m reading an old 90’s Image comic, but with DC characters insted – and that’s not a good thing. Image was long on flash and short on story. This new JLA is like that, what story there is feels a little juvenile and vacent. More than ever, I’m reasonably sure this is my jumping OFF point with DC (for a while at least).

However, don’t worry, there’s no reboot coming any time soon for Violent Blue….but a new strip will be up tomorrow.