My Bloody Valentine (But only in 3D)

Way back in my “What I Learned From 12 Hours of Terror” post I mentioned that My Bloody Valentine 3d is USLESS without the 3d. I’d like to take a moment to expand on that. (don’t worry, if you get bored, just skip down to the Violent Blue link on the bottom of the post)

In 2009 when  this was released, My wife expressed an intrest in seeing this. She rarely wants to go to Horror movies, so I was  looking forward to going. We wanted to go around Valentine’s day, a little less than a month from the premier. It was out of theaters in about two weeks. Not more than three. I picked it up from the library about a year later, and it was pretty terrible. I figured we’d dodged a bullet and never really thought about it again.

When it was announced for the 12 hours of terror marathon I was a little disappointed, seemed like a wast of a slot for a better movie. Then I found out they were going to screen it in 3d. I figured I’d give it another chance then, and hoped the 3D would make it better.

The 3d effects were GREAT.

It didn’t make the story any better, and I still don’t feel sympathy for any of the characters, but it did change my perspective.  My Bloody Valentine 3d isn’t about the story. That’s all beside the point (I wouldn’t be surprised to find out that the producers figured out what effects they wanted to showcase, then wrote a story around it). This whole movie is an excuse to show 3D effects, to show off the technology.

That’s kind of a shame isn’t it?

I got my hands on a 3d copy of “House of Wax” with Vincent Price last year. I pulled out my blue and red glasses and popped it in the DVD player. It’s a whole different movie in 3d. Really a whole different experience, which is odd, because it’s not full of 3d gimmicks, it just has a greater depth and really interesting look.  The difference here though, is that I can watch it without the 3d and it’s still just as good of a movie. The 3d effects enhance it, but they arn’t the point of it where as My Bloody Valentine just doesn’t stand up without the 3d gimmick.  If that’s the case, why are you even bothering to make the movie?

By the way, just a reminder, there’s still a new comic strip up from yesterday. Come visit us here :  http://violentblue.thecomicseries.com/comics/283

Why The Fly should be remade (continued)

Yesterday, I talked at length about why I’d like a remake of “The Fly” besides the 1985 one. Today I’d like to address who I would like to see direct it.

I want to see James Cameron direct “The Fly”.

Mind you, it’s not going to happen. No one in hollywood is even thinking about doing this, and even if they were, Cameron’s a respectable director now and I don’t think the Fed has printed enough money to make him go back to doing monster movies.

The thing is, “The Fly” is a rather bleak story. It can veer into complete hopelessness really easily (the 1985 remake is a perfect example of this). But Cameron has demonstrated the ability to take a bleak story and inject just enough hope into it to keep it from going over the edge. The Terminator is a great example of this. The ending is almost like one of Carpenter’s Apocalypse trilogy, yet there’s almost a hopeful feeling in the air. The end is coming, but we’ll be ready. It’s validated in T2 which is again a desperate fight against impossible odds. Indeed, T2 is a movie where we open up to find people in dark, hopless situations, but we never feel like there’s no point to the struggle.

Aliens is another great example. Here we have situations where death is preferable to what might happen next. It can be a chilling thing to see someone begging you to kill them. We have Riply with her life GONE, destroyed. and these things are still out there, thousands of them. You’ll never kill them all They pursue you, and Gorman and Vasquez hold hands over a grenade and prepare to die, and yet it never feels pointless. Overwhelming, almost hopeless, bleak even. But never does it feel like there’s no chance. There’s always a reason to continue struggling. There’s always just the slightest possibility of getting out of this situation.

Cameron knows how to make a bleak story a triumph of the human spirit. This is after all, the man who made the Titanic into a love story. He understands action and terror. More importantly, he REALLY understands sci-fi. Imagine getting him into the production design, creating the pods, the creature, the technology and the devolution. What was missing from Cronenberg’s Fly was the soul of the story. the adventure and heart. And that’s fine, that wasn’t the film Cronenberg was making. But I’d love to see this movie remade with the sensabilities of someone like James Cameron. I think there’s still hope of a slick 21st century remake of this movie too. With “The Blob” up next to be remade (though Rob Zombie’s departure may stall it) we’ll have to see if this movie can be successful. If It is we can be sure that other classic properties will be getting eyed, and the time will be prime for a Fly remake.

Why The Fly should be remade (but not by David Cronenberg)

I mentioned earlier this week that I’d really like to see a remake of “The Fly” but not by David Cronenberg. I thought I’d take a little time to explore that idea.

I’m no detractor of the Cronenberg fly. There are some modern remakes like Friday the 13th that create and add nothing to the concept. The F13 remake really has not point to exist. I’m not a real huge fan of the Nightmare on Elm Street or Halloween remakes, but at least they give a different perspective, and have a valid point to make. Their flaw is they fail to entertain and create a story that isn’t as compelling as the original.

Cronenberg’s Fly does none of these things. It’s a good film that stands on it’s own. It explores it’s own ideas and has an entertaining, compelling story. it’s a valid “alternate universe” telling of “the Fly. So why am I down on it?

The original “The Fly” is a genre picture. It’s a horror movie, a monster movie and a good one at that. But Cronenberg movies are a genre too.  A genre all to themselves. Some directors become that, directors like Kubrick, or Carpenter or Burton. Cronenberg films are definitely a genre to themselves; you absolutely know what to expect going into them. A nihilistic exploration of existence, sensuality, body horror, and a definite focus on sexuality and what it means as part of a fleeting existence. That’s fine. I don’t mind any of this in a film format. The problem is that it  takes “the Fly” ,a movie already marginalized by it’s status as a genre film, and squashes it down further into sub-genre.

It’s also a pity, because it stands alone as THE remake. I don’t mind the Burton Batman, because there are others out there and I’m not married to it. I can go watch the Nolan or Schumacher batman films or watch the animateds. With”The Fly” however, you either have Vincent Price or Jeff Goldblum. Either the campy monster movie or the sexual charged nihilistic film. The two are so far apart in their philosophies and execution, it’s hard to believe they come from the same source! I’d like a modern Fly that’s a fun monster movie, with modern effects and a modern setting. Much like they did with the “Dawn of the Dead” remake, and I know exactly who I’d like to see make it.

But we’ll talk about that tomorrow. For now, go read some Violent Blue.

5 things I learned from 12 hours of terror

3.”My Bloody Valentine 3d” is pointless without the 3d.

4.Two weeks is not nearly enough time between screenings of “Basket Case”

5.I’d really like to see a remake of “The Fly” that isn’t directed by David Cronenberg (Imagine if James Cameron did it?)

Halloween, Heroclix and the Weekend 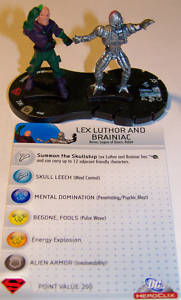 Had a really nice time last night playing Heroclix with the guys over at Get ‘Em Comics getem-comics–games.webstorepowered.com/ref=sample_one. I was surprised at how well my Brainiac/Lex Luthor duo figure worked. I’ve heard nothing but smack talk about it over at HCrelms, but this was a nice tank. It ended up being my last piece standing, and one of the final three pieces on the board. To be fair, I do think the guys were taking it easy on me, and I got some incredibly lucky dice rolls (three or four times in a row, I hit EXACTLY what I needed). But not bad for a figure I got mostly for fanboy reasons, not strategic ones. 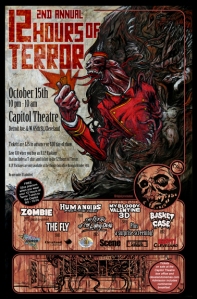 Speaking of fanboys, I’ve got David Tennant hair today and couldn’t be in a better mood. I’m going to goth out a little for the Hallowen party tonight and then take the girls on a Halloween walk at the park. Hope your weekends are just as good. If you’re in the Cleveland area, don’t forget about 12 Hours of Terror at the Capitol Theatre. I’ll be the one in the Saw shirt (they were giving them away last year) with the Superman blanket and He-Man pillow. Got my commentary for Fulchi’s Zombie already cued up on my iPod.

After all, you’re going to need something to get your mind off of Violent Blue’s cliffhanger today….

Been neglecting the blog, but I’ve been kind of falling behind on a lot of other things lately too. I finally finished a couple of commissions, and more importantly, I got done with the end of year 3 story arc. While it’s only three strips, the panel count is more like five or six and it’s drug everything else down to a screeching halt creatively. Hopefully I can get back to drawing happy stuff for a while.

Also managed to catch “Nosferatu” over at the Capitol theatre on Saturday. Kind of blows my mind to think I was sitting in a movie theatre, watching a film that was new when my grandfather was a teenager. I’m hoping to make 12 hours of  terror this wekend, and if you live in the Cleveland area, I highly recommend checking it out. It’s a 12 hour movie marathon (10PM Saturday to 10 AM Sunday) of seven horror films. One of them is always a surprise showing (last year it was “Primal” which turned out to be pretty good) along with some very recognizable scary movies. Last year They screened the original “Nightmare on Elm Street” – seeing that on the big screen was worth the price of admission alone. This year it’s Fulchi’s “Zombie”, “Inhumanoids From the Deep”, Croninberg’s “The Fly”, “Basket Case” (Funny, I just saw this for the first time at Cinema Wasteland two weeks ago.), “Return of the Living Dead” and “My Bloody Valentine 3d” (Which Amy wanted to see on Valentine’s day that year…except it was out of the theater by then!

By the way, there IS a new Violent Blue up today (we still have yet to miss an update and I’m very proud of that.) find it here: