More autographs! I sent this picture out to John Carpenter last year. HE was nice enough to sign this and a Prince of Darkness (my favorite Carpenter film) 8×10. Well I just got a hold of Wilford Brimley’s address through my stalker network (okay, I’m kidding. It’s not really a network….) and sent this out last month.  It’s a pity he signed in such a dark place (towards the bottom, below the title)…Must have been the diabetes…. 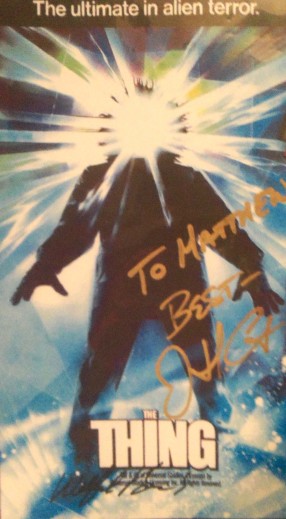 A big thank you to Barbara Eden for signing that Jeannie photo for me! It arrived in my mailbox on Saturday and absolutely made my day.

You know, for those of us past a certian age, Ms. Eden is one of those people we think of when contemplating the most beautiful women in the world. She’s right there with Lynda Carter, and Erin Grey as an iconic beauty. (Both of whom have also been nice enough to autograph pictures for me by the way. 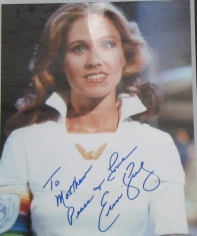 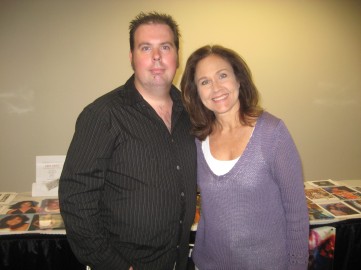 Does that kind of icon even exist any more? The kind of beauty that inspires this kind of interest and nostalgia twenty or thirty years later? I mean, is anyone going to care about Jessica Beil or Jessica Alba twenty years from now like he same way we remember Farrah?

Something to think about while you read the newest Violent Blue.

Okay, I generally don’t watch SyFy Channel movies (actually I almost never turn the TV to that channel at all) and I’ve given Asylum Films two chances (once on the recommendation of the Horror Ect Podcast. I know that was a Sherlock Holmes film, but seriously Tony….seriously?) and Asylum NEVER puts out a good product…

But I may just  have to catch Bigfoot when it comes out. It starts filming this weekend and stars Danny Bonaduce and Barry Williams and we all know Danny is my favorite train wreck (who was kind enough to put down that bottle of vodka long enough to send me an autograph…)

Seriously? This is a thing?

Well obviously it was. I stumbled onto a copy of this recently. It’s a bad copy (that’s okay. It’s a bad play) filmmed aparently form the balcony in the theatre. In any event, it’s evidance that the play did indeed exist.

I’ve come to terms with the idea of some horror stories as broadway musicals. Phantom, Little Shop of Horrors, Sweeny Todd, I can even accept Jekyl and Hyde (I’ve got a DVD of Hasselhoff’s preformance, what I really want to see is Sebastion Bach’s run in the lead role.), but Carrie???

The play is predictably bad. Not in a funny Evil Dead way, just in a lackluster high school drama club way. The actors sleepwalk thier way through the roles and the music is utterly forgettable. No “Music of the night”, not even a silly “what the F*#k was that?” to get you into the production.

Because it was such a dismal failure and such a brief run it’s achieved cult status (Kind of remids me of the storyline “Nailed!” from Something*Positive) and we all know how much I dig having rare stuff on video, but, outside of the musical marathon I’m planning for this Halloween, I doubt I’ll crack this one out again.

I hope Jennifer forgives me for giving her a copy for Christmas…. 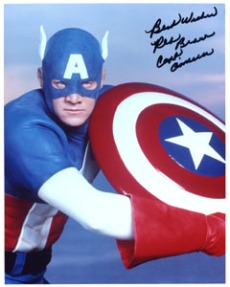 So I was looking for autographs from Reb Brown – the actor who played Captian America in the TV movies – the one on the bike, with the motorcycle helmet (Lana Wood, the love interest from the second one will be at Cinema Wasteland this spring). While browsing, I discovered this. It’s a picture of Matt Salinger from the 1990 film, signed by Reb Brown.

Someone’s not going to be happy.

Go read some Violent Blue and get the bad taste out of your mouth.

I got hopelessly behind on Hellblazer last year despite my best efforts. That’s a pity because the title was really getting good again. I still intend to hunt down all the old issues I missed (there’s about five I think), but when I saw the Annual, I grabbed it right up since I figured it would stand alone.

I say Simon Bisley’s name on it and was more than a little dissapointed. I’m not a fan of his work, nor of the subject matter he tackles. Same with Sam Keith. It’s too big, exaggerated, too much Lobo and Wolverine, not enough substance.

That said, this is some of Bisley’s best work I’ve seen. Wonderfully moody and nicely understated. It complements a well thought out story. I’m a fan of places that arn’t so much haunted as they are malevolent.

Grab this if you see it. They manage a sad subject, surpriseingly free of the vulgarities that Hellblazer is usually drenched with. Constintine is in full mystic mode andthe ending, while predictable is still satisfying.

Here’s hoping it’s enough to get me back into the Hellblazer reading mode. In the meantime, why don’t you get in the Violent Blue reading mode and check out the lastest strip!

So I was finishing up watching movies I got for Christmas. It was a nice year last year, I saw every blockbuster I wanted to in the theatre…a feat I haven’t preformed in a long time (discovering the underground film scene in Cleveland and three $3-$5 theatres clsoe to my house helped a lot). Of those summer films, I only asked for two for Christmas; Green Lantern and Captian America.

Something strange occured to me. 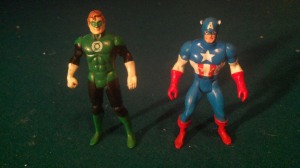 Most of you know, my first action figure ever was Green Lantern from Kenner’s Super Powers line.

Did anyone know that my SECOND action figure ever was Captian America from the Secret Wars line?

Not only that, I used to play with them together…they were thier own special super-team. It’s a wierd thing, I’m the only one who really associates these two together because of the toys I had as a child, but here are both o

f these characters with films being released a month or two apart this year, and both in my hands today. It’s a fun kind of syncronicity that I’m probably overthinking, but it makes these two movies all the more special to me. (Thanks to my wife for finding  them both for me!)

By the way, There’s new Violent Blue up! Go check it out!

It’s a somber time over at Violent Blue, and I wanted to share some of my thoughts on the current storyline. It’s been part of the plan since the beginning, so don’t think I’m jumping the shark by killing off a main character, and don’t think that it’ll be forgotten anytime soon.

Sometimes there are no answers. None of this side of the schism anyhow. Sometimes the answers arn’t what we are really looking for anyhow.

As I write this, my mother-in-law is in the hospital. We think it may have been a heart attack, but we won’t actually know for a while yet. That may be the worst part. The not knowing. The timing, coming as it did in the middle of the funeral storyline….is unnerving to say the least.

I’ve always found Blasphemous rumors to be a strange dichotomy. It’s meant to be, but it really depends on your perspective. If you believe in eternity, if you believe in God and a saving relationship with him…then the song might just be about God holding back on taking that soul until it’s ready. Funny, considering the song’s meant to be an ironic tragedy. I find a great deal of hope in it. Apparently Steve does too.

We’re going to be heading into a rough year for some of our characters. Violent Blue has always tried to keep a hint of drama around, and this year is no diffrent. That said, I hope we’ll continue to make you laugh (starting next week we go back to funny, trust me) and maybe make you think sometimes as well.

Opps! Got to go. The Boss is ordering pizza for us in the office!

I hope you all had a good new years. My Christmas and New Years haven’t been plesent, but I’m trying to keep a little more positive. And in that spirit, I’m going to pledge to blog more this year and hopefully make this a little more integrated with Violent Blue. Well, we’ll see…

Things are a little grim over at Violent Blue right now, as you can see in yesterday’s strip : http://www.violentblue.thecomicseries.com/comics/315  and it’s going to be a little bit of a rugh year for some of our characters, but never fear, we’ll be back to jokes next week.