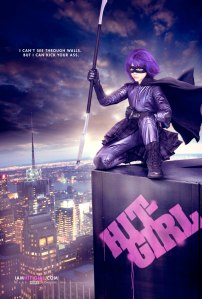 So I actually skipped the Super Bowl last month (big surprise) and decided to catch up on movies  instead. The wife was out at a superbowl party and the kids were upstairs watching some insipid princess thing. I finished a recent film on Netflix and an unbelievably boring documentary on Dracula, and was scrolling through trying to deiced what to watch next.

Kick Ass is one of those movies that’s required viewing for Comic fans. I never bothered with it before because I didn’t think there’d be anything there that interested me. I followed the comic through issue four or five, and it just didn’t do much for me. But there it was on Netflix available for instant viewing, and I had nothing better to do. Let’s give this a try.

I still wasn’t expecting to really like it and the first chunk of the film didn’t do much to prove me wrong, but by the middle of the movie I found myself liking it way more than I expected. By the end, I realized this had actually been a good movie.

The thing is, everyone says Hit Girl steals the movie. They’re right, but perhaps not for the reasons you expect. It’s not her skill or the foul mouth that I find so fascinating…it’s that she SO much her fathers daughter. That speaks to me deeply. I want my daughters to become two little Hit Girls – not necessarily the gun toting , blade wielding assassin type. But it delights me when I walk into the library and there is Lydia, sitting watching He-Man. Or when Maddie wants to draw with me and color zombies. I’m secretly elated that Maddie wants to be She-Ra for Halloween (She and Lydia have both taken turns being Rainbow Brite). I’m alternately appalled and yet still proud that when my wife is flipping through channels, Lydia demands that she go back to the station playing the zombie movie. It’s unbelievable amusing to watch Maddie describe the scene from a horror movie  : “That monster just made that guy dead!”.

I want them to grow into girls that want me to take them to the comic shop or watch monster movies with them. Hit Girl is the embodiment of her fathers dreams and ambitions, and that’s what connects with me.

And I’m pretty sure that if anything happened to me, they would avenge my death….