Generally I try to make only one food run a day while I’m at Cinema Wasteland. It’s either to get a $5.00 pizza from Georgios that I can slip out to the car and grab a bite all day, or it’s over to Chipoltle for a burrito so big that I don’t have to eat again for 24 hours.

I was pulling out of Georgios and hading up Pearl road when I spotted a sign for a little bakery advertising “Deep Fried Peeps”. I’ve tried deep fried twinkis and pickles and made deep fried oreos. honestly, I’m not a big fan of this stuff outside the novelty value but…..well I had to know. 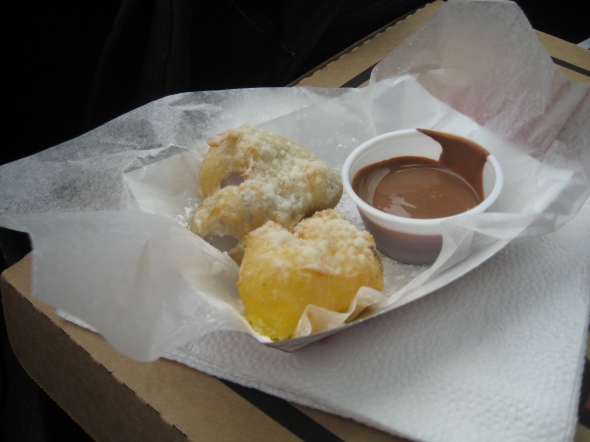 It’s not bad. The marshmallows don’t entirely melt inside the batter and there’s a little cup of choclate for dipping. Still you have to contend with the taste of deep fryer oil and stuff so unless your a real fan of the deep frying craze it’s probably not going to be your first choice.  And as far as the whole deep frying thing, I think Penny Arcade put it best with this strip.

(Okay, now that you’ve gone and read thier webcomic, why don’t you go and read mine over at Violent Blue)