Battle for the game market

An interesting bit of news I ran across on the PC Repair on Wheels blog. For the 2011 fiscal year (April 2011 through March 2012), Nintendo posted a historic first-ever net loss of $530 million dollars.

You know, especially for people of a certain age, Nintendo is a big deal. Sure they’ve been eclipsed by Sony and Microsoft in the last decade, but they are still iconic in the gaming world and have always been the masters of the handheld game devices. No one has ever really been able to beat Nintendo when it comes to portable. Sony came close, but never really overtook them. That’s where this gets interesting.

“What went wrong was that sales of the 3DS didn’t take off as we expected,” Nintendo President Satoru Iwata said (via Bloomberg). ”

So what’s going on here? What’s different now than in years past? It’s the smart phone.  Smart phones have been around for a while, but more and more cell phone companies are transitioning to those exclusively. As contracts expire and new ones start up, more people than ever are getting smart phones and the game market for the smart phone is exploding. It’s the first real competiton for the handheld market Nintendo has ever faced, and the battle is on. 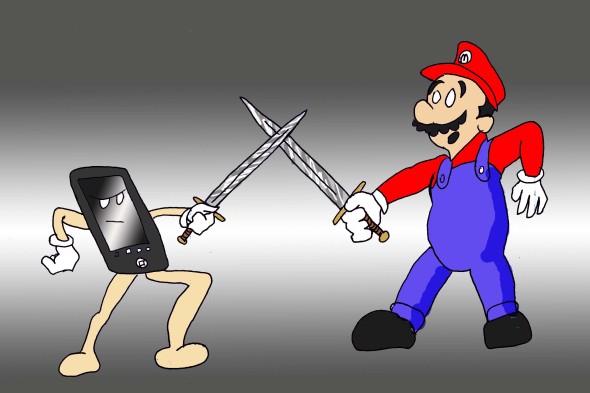 I wonder how Steve over at Violent Blue feels about this?