Catching up on comics (part two)

So yesterday we talked about mostly what I didn’t like…really it was about the stuff that didn’t make an impression on me. Today it’s going to be about a couple titles that really caught my attention. 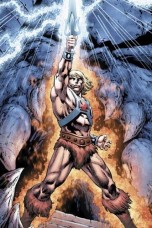 Let’s start with Masters of the Universe.

Oh my GOD this is so good. I grabbed the first to issues in the mini series and tracked down three of the five (i think) digital issues. It’s all just brilliant. It almost has that more barbaric feel to it that the early mini-comics (the ones that came packed with the first wave of action figures), yet they haven’t tampered with the history (like the 2002 version did). Adam is a simple woodsman, taking care of his ailing father. But at night, he dreams of being a warrior. He dreams of He-Man. 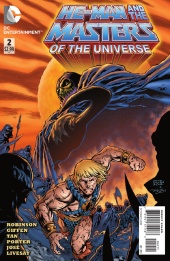 You see…at some point, Skeletor won. Not only did he win and take over the world, he made all the heroes forget who they were, and scattered them. There is no champion of Eternia, There’s just Adam, but he still dreams of He-Man. Now, on a quest, he finds he has skills he shouldn’t have. Skills with a blade he couldn’t possibly know. And what’s with the eagle that follows him? Somehow he knows it’s name – like it told him. It’s name is Zoar.

This series is magnificent. It’s possibly the best treatment of the characters I’ve ever seen – and I’ve seen it all. No offense to Val Staples and Emliano Santaluca who were doing the MVP series in the early 2000’s. They had their hands tied by Mattel,

and the entire series was being squeezed into a mold that it really didn’t fit into, along with a toy line that was being grossly mishandled. This is a far better story that Keith Giffen is telling and they seem to have more creative freedom to explore the mythology. In fact, I think I should check over at Val’s message board He-Man.org  to see what the consensus is over there.

Check out the digital copies too. The Battle Cat one is incredible….how did they manage to take a silly talking tiger and create such an engrossing short story with it?

Then there’s the Shadow. Four issues in and the jury is still out on this one. I was really intrigued to see what Garth Ennis would do with him. The Shadow is a good character for ultra violence, and if you’ve written the punisher, then this should be a good venue as well.

I’m not thrilled with how Margo Lane is written. She’s always been a pest but in this she’s a real pill.  Ennis appears to be heavily influenced by Howard C

haynkin’s version of the character. This could very well be the 40’s version of Chaynkin’s 80’s series. I’m not a big fan of that. Ennis also gets a little too rapey for my taste. That’s a hot button with me and he’s including a lot of it in this story – all references, nothing graphic, but it

‘ll keep me from reading this one too often.

When it’s good it’s very good. Ennis knows his violence and gets creative with it. I would like to see more of that though, and perhaps a little more  mystery. You could probably distill everything I like in the first four issue and fit them in a book and a half. I grew indifferent towards Dynamite’s Green Hornet, though it got better once Kevin Smith got off the book. I see myself heading down that same path here.

I dipped my toe in Dynamite’s new Dark Shadow

series as well. I think it’s taking place further along in the series than what I’ve watched so I’m putting theses on hold for the time being. Interestingly enough, I discovered this because of the Dark Shadows/Vampirella crossover! 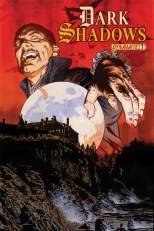 The thing that I find the most striking about the Dark Shadows book, is

how well done the art is. They capture Collinwood perfectly. Not just the look of the house, but the rooms

themselves. The artist obviously has a bunch of photo references. Everyone looks exactly as they did on the TV show and the we frequently see the rooms we saw on the show, drawn in exacting detail. It’s a really well done book and I’m looking forward to picking it up again.

Finally, I sampled a couple of the Before Watchmen books.  You know, I really don’t know why this hasn’t been done before. They are good stories and the characters feel very natural, very familiar. It works.

That’s not to say it’s the masterpiece that Watchmen is. It couldn’t be. It’s not supposed to be. Do you expect every issue of Superman, or Batman or Justice League to be the triumph that Kingdom Come was? This is the groundwork. I think these stories get us into the characters and attach us further to them. Far from being detracting, if anything, these stories make Watchmen better. Give ’em a chance. You’ll like them.

I still have half a stack to cover. I haven’t even cracked my Lone Ranger books, my stack of Grifters, or Suicide Squads. So I’ll be back with part three, hopefully next week. Until then, check out this weeks Violent Blue!