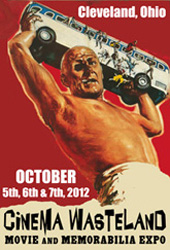 Looking forward to heading out to Cinema Wasteland this weekend. Of all the cons I attend it just is the best.

It’s a little weird, I’ve noticed myself doing more prep this time around. I’ve always looked over the guest list and compared it to other conventions so I know what posters to pull or to buy. The idea is to find people in the same movie that will be around different places and get all the autographs on the same poster. This has worked really well for me with the Romero films and CW is generally a really good reunion show. This time around though I’m trying to coordinate my postal autograph requests as well. I sent out to Arte Johnson to get a signature on an Evil Toons poster since the director and one of the stars will be at the show (He unfortunately never wrote back. Oh well, that’s the breaks). I was really thinking I’d try Leanna Quigley on an Innocent Blood poster (since I’m also bound to run in to Tom Savini again one of these days) and sent that one out to John Landis to get signed about five months ago.

I’m really excited about getting to meet Reb Brown. Lana Wood signed that Captain America poster last time at CW and I’m going to get Cap himself on this one. I think I’ll also be asking him about why he signs pictures of Matt Salinger….

So I’ll be taking the weekend off from Violent Blue though it’s not going to be quite the mini-vacation it usually is as I’m also working a haunted house this weekend. Certian now that I absolutely can not squeeze  that showing of Beetlejuice at the Cedar Lee in there too…..