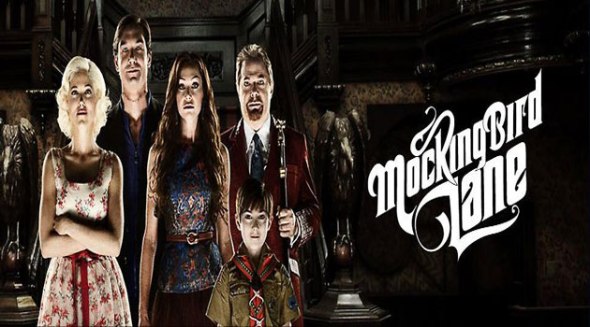 I missed it! I didn’t even realized that NBC was broadcasting it on Friday. Fortunately I was chatting with Kevin over at the Monster Channel Sunday night and he told me I could find it on NBC.com. So I headed over there,  loaded up the page and watched.

In case you weren’t aware, 1313 Mockingbird Lane is a contemporary re-imagining of The Munsters, and is produced by Bryan Singer of “X-Men”  and “House M.D.” fame.  The look is contemporary. It’s slick and the effects are great. It’s got sharp pacing and some interesting practical effects along with interesting characterizations of the characters.

It was developed as a kind of dramatic comedy. There’s a lot of sentimentality and talk of “Loving too much”, and these kind of lines are delivered with such straight faced sincerity it’s obvious they are trying to play this straight.

I think that’s really where this fails. You see, the source material is so absurd, you really have to play this for laughs. I was thinking about this a bit, and wondered if you could have played The Addam’s Family this straight. I don’t think it would work there either. In fact I think they tried a little too hard to be serious in the movies and it’s one of the places those fall short. The tone is important with these kind of stories. This isn’t the place for an hour drama/comedy like Ally McBeal or Franklin and Bash. This is strictly half hour sitcom / slapstick material like Night Court or Big Bang Theory.

The tone also applies to the look of the characters. I’m not a hater as far as them looking repetitively normal. I get what they were trying to do, but it seems like they may have gone a bit too far in many cases. Herman really needs a different build. Someone big and clumsy like Brad Garrett. When Herman would fall or stumble, it just didn’t work right. Jerry O’Connell is just to…pretty for that to work. It feels wrong. There was a clever moment when he was silhouetted in front of a lantern giving the square head and bolts look for a moment. I will grant that they didn’t need to go that far into the Frankenstein makeup, but perhaps a messier hairstyle that gave the impression of a bigger, more square head would have worked.

Lily, played by Portia de Rossi, is fairly well realized, but I missed the streaks in her hair. I  think it would have been perfectly reasonable to have two toned hair, perhaps in a more modern style rather than the skunk look. A few more Bat  touches as well – a necklace or bracelet. Perhaps a choker would have completely satisfied me.

Eddie is totally good. I’m fine with him. Mason Cook did a perfectly adequate job for someone his age.

Charity Wakefield’s Marylin kind of baffles me. Considering that they seemed to put great effort in making sure none of the characters looked like their counterparts in the original series, they sure made Marylin look like she stepped  right out of a 1960’s peroxide ad. She’s supposed to be the normal looking one. That Marylin Monroe look of her’s is completely out of place in 2012. There’s a serious missed opportunity here. She could have been a perky cheerleader type or a hopeful Glee clone. Making her look exactly like Marylin from teh original Munsters actually makes her look more out of place than the rest of the family. 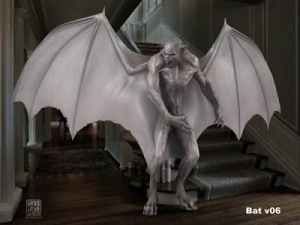 Then there’s Grandpa, played by Eddie Izzard. Grandpa was one of the best things about this show. The look works just fine for me – except when he vamps out. And that brings me to my final criticism of the pilot. The horror.

Grandpa’s vampire is terrifying. It’s grotesque and right out of the Coppola Dracula movie. Seriously well realized but seriously intimidating. I wouldn’t let my kids watch that monster, it’s too scary and that was the whole point of the Munsters. It was a gateway show for monster kids, monsters that weren’t that scary but still monsters. It’s not jsut  that Grandpa is terrifying, things get a little scary violent -especially towards the end. Eddie’s scoutmaster is invited over for dinner because Grandpa wants to kill him, drink his blood and put his heart in Herman. It almost happens. He vamps out and the scoutmaster accidentally falls down a flight of stairs and is killed accidentally before Grandpa can murder him. One of

the last scenes is Herman on the operating table with a new heart and Grandpa drinking the last of the scoutmasters blood through a straw. That’s a little gruesome for The Munsters. I’d be fine with it in a horror show, but it’s out of place in a comedy. The gore (particularly when Herman is being operated on) is pushing it but can work if done properly (The Mark Harmon film “Summer School” immediately comes to mind) but murder and death are just wrong for this context.

The show wasn’t picked up, and I admit, I’m glad. This is the wrong format for it. But I’m also glad the pilot got made and got broadcast, because it gives us a different image of The Munsters and speaks to some very good ideas. I think this show could be updated and look a lot like what this pilot showed us. But I think the theme and tone need to be different so that it turns The Munsters back into a show were we get the opportunity to laugh at what scares us.

This entry was posted on October 30, 2012 by mathias42. It was filed under Horror and was tagged with Horror.