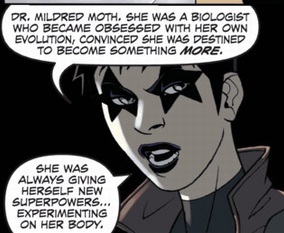 First and foremost, I’m SO dropping Bloodstrike, right now. Right this minuet. Bloodstrike was never cutting edge, throught provoking entertainment. It was at best, a cool shoot-em-up, big pretty fights with lots of lens flares and cross hatching, a very Image kind of book. It was fun and every issue that I’ve pulled out of the twenty five cent bins has been totally worth the quarter (or dime in some cases) that I have paid for it. This relaunched version, as I have stated previously, has taken anything that made the series fun and discarded it, what you’re left with is less than a soap opera. This panel alone is a good enough reason for me to drop this book an

I’m not so sure about Dial H. I’ve got a soft spot for comics that use characters or concepts I remember from reading the old ’85-’86 Who’s Who DC put out. I can see they are trying to build a mythology and it’s actually not a bad one, I’m just not sure it’s enough to hold my attention long enough to get where they are going. I got it last month too and I may stick around for one more issue.

picked up Human Bomb solely on the strength of Jerry Ordway’s art. He’s always been one of my favorite artists, all the way back to his work on All Star Squadron. He defines what Superman should look like to me. So I’m always willing to gamble on a new title if he’s attached, but this one didn’t grab me exactly. I think I needed to see more story here, we get introduced to one of the construction workers building the new World Trade Center at Ground Zero, and he runs into an old army buddy from Iraq who turns out to be a Human Time Bomb, but out hero manages to absorb the blast….we find out there’s some connection to S.H.A.D.E……I’m a little lost. It wasn’t a good enough introduction to hook me. Pass on the rest of the series.

hat I really want to talk about though…is Shadowman.

With the return of Valiant, I was extremely excited about a relaunched Shadowman. The Acclaim version was always unsatisfying, and in the two or three years it limped along it revamped itself three times. It was a poor decision to radically change the series the way Acclaim did, but that was less a creative decision than a business one to get Acclaim out of paying off some contracts….yadda yadda yadda. The final incarnation, with Shadowman being a kind of Voodoo hit man was possibly the best realized, but the series ended unfinished. Then again, I suppose you could make the same argument about the original series which intentionally ended on a cliffhanger in issue 43 (Which by the way, confused me for years. I can’t tell you how long I searched for issue 44.)

This version is a lot more like the Valiant one. Jack Boniface is the Shadowman again, though his backstory is different. He’s a museum curator rather than a musician and the Shadowman is now a family legacy. I can see the new Valiant borrowing many of the best elements from classic Valiant and Acclaim Valient to create a whole new concept. The hellish Deadside idea is still in play, as is the Shadowman’s ability to travel between worlds. Shadowman however is more a superhero again, with the idea that the loa affects, even takes over your personality during the night hours being ramped up. I have to admit, I don’t dig the mask, but I am enjoying the series so far and I’m eager to see where it goes. Let’s revisit this one after we’ve gotten six issue out huh?

Speaking of comics, there’s a new Violent Blue today. Head on over and check it out!

Look what I just got! (If you happened to hear a loud scream coming from the Cleveland area this morning, that was me.)