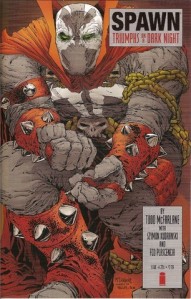 This week I dipped my toe in a bunch of titles that I haven’t been reading in a long time. The problem with doing this however, is you can feel like you just walked into the middle of a story and end up quite lost.

Spawn manages the feat of making me feel like I’m in the middle of a story I don’t quite understand while at the same time feeding me more of the same old same old. It’s more “Who do you work for????” “Jason Wynn!” “Wynn’s coming for you!” Chains, power  countdown timer, menace. I’ve seen all of t his before. On  the other hand, it’s been a long time since Spawn has been cutting edge. The most revolutionary thing they’ve done in the 21st century was to change the identity of the title character from Al Simmons to ….I don’t even know his name. Perhaps if I cared more….

On the plus side though, this has spectacular art. It’s very similar to Tim Bradstreet, very much like the dark noir look of the best modern Daredevil stories. Last week I mentioned that Jerry Ordway was one of my favorite artists. I’ve always favored a more realistic look to the dynamic, hyper stylized feel of a Liefield or McFarline drawing. This works really well. I’d love to see this guy do a Hellblazer or a Hellraiser. 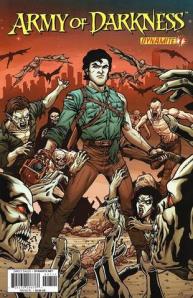 Army of Darkness is always a fun title, but you have to understand, this series has strayed miles from the movies. That makes it easy to feel lost. The thing is though, they haven’t really done any world building. This isn’t a tight continuity. They seem afraid to move far from the established characters and continuity of the films, so we just wander from situation to situation without ever really creating a narrative.

When a female Ash arrived at the cabin (now floating in another dimension, at a causal nexus of some sort), I was really hoping they were making an attempt to integrate the new Evil Dead movie into this series. It would have been a smart move and all this talk of multiverses seemed to point that way. The cliffhanger makes it 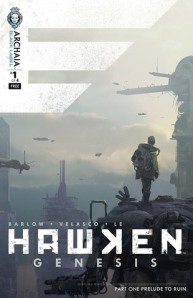 clear that it’s not.

Finally there was Hawken : Genesis. Despite the fact that there are several gamers in my Violent Blue comic, I’m not one. I built myself a Pac Man Machine and decided I never had to buy another platform.

The point being, I had no idea this was based on a video game. It’s a great idea though. The art is stunning and the concepts are fascinating. I can absolutely see how this would completely flesh out a game world. These are very short stories, about half the size of a regular comic, but well worth it if you can track them down. I ended up having to go online to find the previous entry in the series. 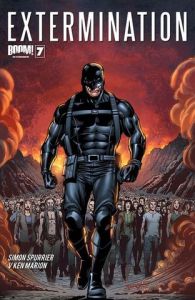 I also grabbed Extermination. This really seemed like just indie superhero fare, but seemed to get a little dramatic towards the end. I haven’t read enough of this series (this was the first time I’d noticed it) to know if it had earned that kind of theme. I think I’m too lazy to go back and find previous issues though.

I happen to love Sherlock Holmes. My grandmother introduced me to the character when I was a child, but I only really started to appreciate him when I was a teenager and rediscovering it in reading class. I wasn’t this comic to be good. i really do. It has 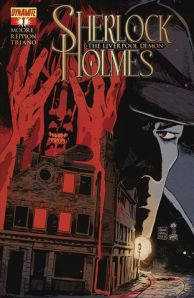 a beginning and and ending t hat both catch you, but the middle of this book just slogs on. It’s part one of a story so you almost want to give it some slack, but it just doesn’t keep my attention enough and the art in it is awful. Technically good drawing I suppose but it completely misses the soul of the characters and the era. I’m just not into it. I will probably get the second part of this, but it better get real good real quick or I’ll be dropping it.

Speaking of dropping, I think I’m done with new Valiant’s Bloodshot for a while. It’s not a bad book, it just isn’t my thing. I didn’t really get way into the original series and that may be having an effect on me. Archer and Armstrong on the other hand, continues to be a fun ride and genuinely 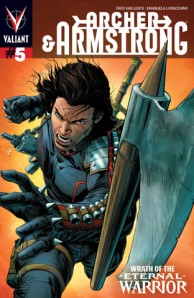 better than it’s predecessors. I like how they are trying to ease some world building into this series by introducing the Eternal Warrior and t he idea of the Geomancer in through this series – and it’s the perfect place for it. Armstrong always put me off a bit in the old Valiant, but I like him quite a bit in this incarnation. Maybe it’s the hair or the better dress sense. I don’t know.

The Green Hornet on the other hand….I do believe they have the shark in their rear view mirror, having jumped it about the time Britt jr and Mulan Kato started gettin’ busy. Now with an attack on the home base…I know these are all classic comic book tropes, but this 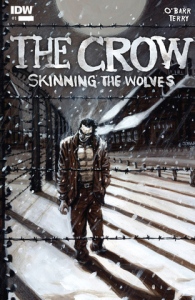 series is only like, two years old. Isn’t it a bit early to be hitting these cliches already? I like some of the extra elements they’ve come up with and the expanded cast, and I’ll keep reading as long as it runs, but I don’t think I’ll really miss it when it’s gone.

I saw there was a new Crow series out and thought I’d give that one a try for old time’s sake.

Why do I keep doing that to myself?

Actually the idea of a Crow at a death camp in Nazi Germany isn’t a bad one, but it’s just not enough for me to care. This concept has gotten so watered down over the years, it almost seems like anyone who dies violently comes 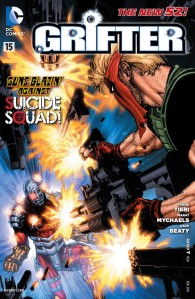 back as a crow. I half expect batman’s parents to come back as the Crow!

Grifter is still a good series. I’ve heard this one is getting cancelled and that really does make me a little sad. I’m liking it and really enjoying the newer take on the character. This issue has him facing the Suicide Squad which is pretty much just flat out fan service aimed directly at me….or it would be if it were a Suicide Squad I recognized. Still, it’s actually a better handling of most of those characters than I’ve been seeing in thier own book.  I love how he describes them : “Everyone in t he squad is dangerous.They’re Black Ops criminals with nothing to lose”. I’ve never really heard them referd to in that manner before and I love it. This story also establishes a prior working relationship between Grifter and (the new 52 character who isn’t anything remotely like) Amanda Waller. This particular comment alone is enough reason to get this book.

I miss fat, middle-age Amanda Waller. I totally believed that character WAY more than I do with this young, slim imposter.

Anyhow. Can I talk about She-Ra now? 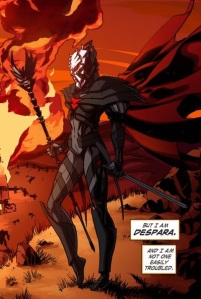 First and foremost, we don’t see She-Ra in this series, we don’t get the entire Secret of the Sword treatment either, but rather we get just before that. This character and series is apparently going to be intergrated into DC’s MOTU series eventually and I can’t wait.

It’s itneresting, they address something I had felt for years – Adora’s costume. In t his she is still aHorde Force Captian, just like in Secret of the Sword. However, in that cartoon, she was wearing the same Adora costume that she wore for the rest of the series (which is fine. I get limited animation and all of that). Essentially a jacket and a nice confy cotten shirt. Everyone else in teh Horde wore armor and bats and sigils and she just didn’t fit. This changes that… and her horde armor is stunning, not to mention the name : Despara. Just great stuff. She fits in better with the Horde here, rather than coming off like a princess wandering through 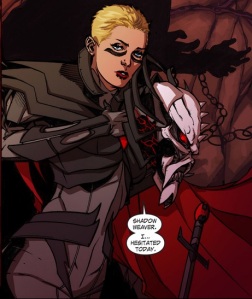 the halls of evil treading on rose petals all the way….now, she looks evil. Moreover, when she takes that helmet off….she looks damaged. You can see the brainwashing in her eyes, the chopped hair just adds to it all. I love this.

When we open, it mentions that we are on Etheria – in the dark dimension of Despondos. That tells me that we aren’t throwing out all of the previous continuity from the failed MYP series in 2002, and that’s a good thing. While there were elements I really didn’t like about that series (most notably the designs for He-Man and the Sorceress) That series worked very hard to add some mythology to this world that had never been as well developed as it’s contemporaries in Transformers and GI Joe. It added a great deal to the MOTU story and I had feared most of that would have been thrown right out the window since that series was now out of favor. 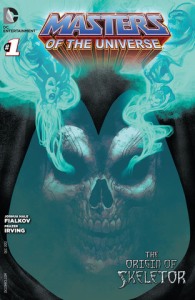 That was in fact, enough of a boost for me to finally crack open that copy of the Origin of Skeletor I’d had laying a round for months.

Seriously. We’d gotten what I thought a spectacular origin for him in the MYP series and I was heartbroken that someone was going to come in and just re-write it. It turns out they didn’t exactly re-write it after all.

This story explores Skeletor’s past. Yes, we knew he was actually Randor’s brother Keldor. We had even expected that he was really his half-brother. And we see him treated as the Half-brother by his parents. Always out of favor, always passed over. Interestingly ( and heartbreakingly) enough, Randor is the one standing up for him. He is perhaps the only person ever to really love Keldor. Interesting but predictable. We probably could have guessed most of this.

What no one ever considered before, was that Keldor was the older brother.

Seriously. This changes everything.

Before, he was just some megalomaniac. He was just a James Bond villian who wanted to take over the world. Now….he’s the elder. He has a legitimate claim to the throne….perhaps even a more legitimate claim than Randor. His madness is what now makes him unfit to rule, but before losing his face and submitting to Hordak’s magic and apprenticeship?

That wraps up this week. Christmas is coming. I hope you all survive it…I’m going to go look for He-Man shaped presents under the tree.