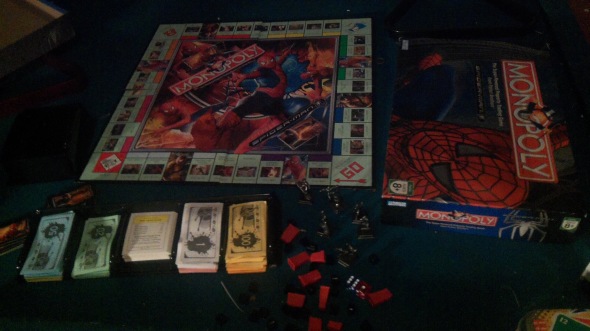 The next door neighbors are moving. Actually they’re bailing, splitting on the landlord and breaking the lease, leaving behind a trashed gutted home.

The bright side is they threw out this really nice Spider-Man edition Monopoly game! I fished it out of the trash along with VHS tapes I can record over and milk crates t o put stuff in. The workers let my wife look around the house but she didn’t find anything else good….there was a Superman Batman action figure two-pack, but the cleaner already called dibs.

I’ve never really gotten into the special editions of Monopoly. I’d bet they have this one at Taylor’s store in Violent Blue though. I was delighted to see all the pieces were there. The tokens are really nicely done – better than some of the heroclix we’ve gotten of the same characters.

Maddie and Lyds are still a little too young to play it though, and Amy won’t

play me any more because she never wins and is a bad loser (Her words, not mine) Oh well. I’ll tuck it away in the game closet and in a couple of years it’ll be all ready and waiting for me and my girls!

This entry was posted on January 31, 2013 by mathias42. It was filed under Spider-Man, superheroes, superheros, Violent Blue, Webcomic .