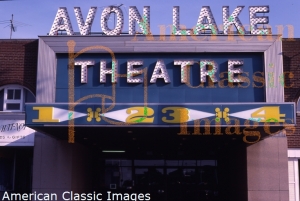 I  think this counts as an Argo City movie night….we will hit a film a little later in the article.

The movie theatre I remember the most growing up was Avon Lake. (I found these pictures over at American Classic Images )  It was where I saw Goonies, Flight of the navigator, Both Raiders of the Lost Ark and Temple of Doom, not to mention Batman, Spacehunter  and the Dark Crystal. It was where I went to my first midnight movie – which just happened t 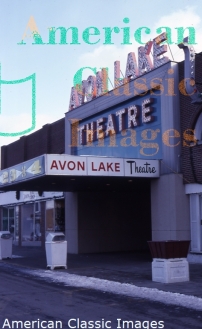 o be a Rocky Horror show screening with the live performance going on below the screen.  It was where I first saw the poster for Return of the Living Dead and the Robocop standup. It’s where I dreamed of going to see the Untouchables.  It was okay, not quite a dump. It had character. Not the neon glitz of the modern Cineplex’s with 20 or 30 screens. From the time I was five or six until I was nineteen, this was my theatre.

It closed in 1995, the year after I graduated High School. I suppose in it’s own way it made sense. Four screens couldn’t compete with eight screens at midway Mall, or ten in Sheffield , or twenty……

Still, I miss it. Some of these thoughts are coming to me because I’m heading to Cinema Wasteland this weekend. Baron Morbid also got me thinking about it in his facebook post about one of the theatres he grew up with .

But then, there’s also this :

We took the girls to see The Croods tonight at Amherst Cinema. For the longest time we just weren’t going to movies. It was too expensive, especially with young children who might not make it through the entire film! Over the last few years though, we’ve been hitting the Lorain Palace occasionally (less now that they do more 3-d films) and Amherst Cinema. They do first run movies and tickets are $3. I can get my family in, get popcorn and a drink and still spend less than $20.

Amherst is a bit more of a dive, but it has it’s own character. Tonight I realized that just like Avon Lake had been mine,  this is my girls’ theater. This is the magical place my girls will remember going to movies at long after it’s gone and they’re grown up.

You know what? I’m thankful that such a place can still exist. 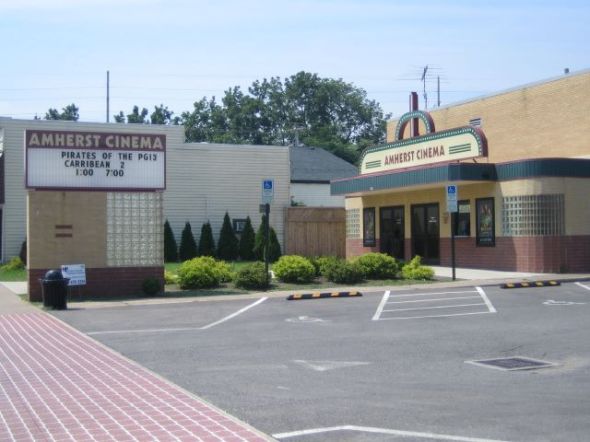