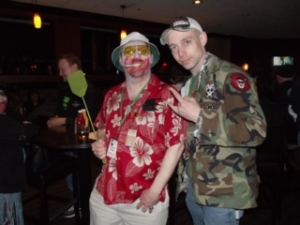 There’s always something special about Wasteland. As time has gone by I realize I see a lot of the same folks there every year and that makes things a little more fun. I kind of hid behind cosplay makeup this year, but still managed to say hi to Jason and Sean and Douglas. Angelique and Killer Shrew, I’m sorry I missed you guys! And a special thanks to Jeff Josyln (the gent in the zombie Uncle Sam outfit) for letting me use a bunch of his photos in this post. We seem to hit several of the same events, I’m going to have to say hello the 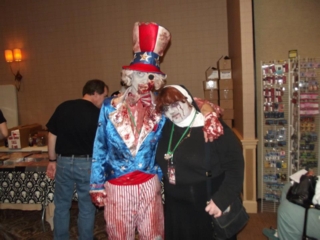 next time I see you.

I caught several movies this year that I’ve never seen before. I was surprised at how much I enjoyed the new Gladiators – I only saw the tail end of it though (scheduling conflicts). Got to see She-Devils a-go-go with the director sitting about two seats away and the room peppered with cast members from Old School Sinema. The strangest thing I saw though, was probably Little Cigars. Little people con men…..featuring Felix Silla (Twiki, Cousin It). Just bizarre. If you’re curious, you can watch it on You Tube here– untill someone wises up and takes it down….

Ghastlee Night at the movies was fun as ever, though I didn’t manage to get in on any of the games.  Ginger Rose brought in balloons that had glow sticks or lights or something in them and they were getting batted around the room all night. People were getting hit in the face, on the head and general chaos ensued. Ken the promoter got roasted (though Sally the Zombie Cheerleader was taking that a little too seriously when she brought out a grill and barbecue sauce) and there was the best cornhole game ever – trying to get teeny bottles of booze through the mouth on a blown up poster of Ken’s face. it just fits Wasteland to a “T”.

I got to meet the cast of Slumber Party Massacre, but the most exciting was getting to meet Brinke Stevens. She’s one of the original scream Queens and someone I’d wanted to see for a while. Jeff Lieberman was

back this time as well, and I finally got a picture with him as well .his panel with the cast of Just Before Dawn was the funniest panel I’ve seen in ages.

I came home with a stack of DVDs, finally getting horror Convention massacre from Old School Sinema’s table and grabbing Gingersquach from Baron Morbid. Lieberman signed a copy of Remote Control. I’ve got a bunch of movies to get through in the next couple of weeks.

Can’t wait to head back to Wasteland in October for The Hills Have Eyes reunion.  In the meantime, I better go catch up on my Violent Blue.

I’ve never seen these Kiss guys before. I’ve got to look into that further. The werewolf girl though, she was just adorable. I love the pink hair and the cute outfit!

I can’t believe I missed this! Where WAS I when this was going on outside????

I saw this young lady last year. She looked a lot more scary this time around 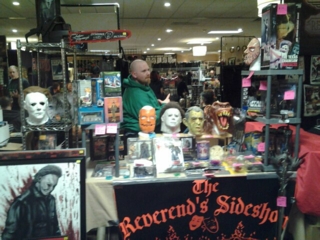 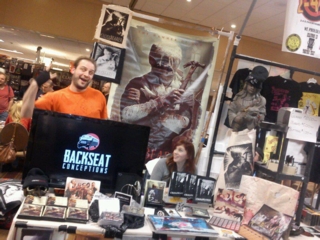 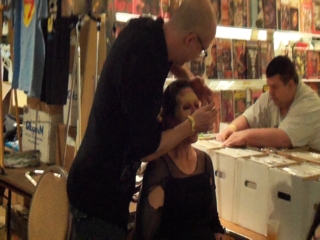 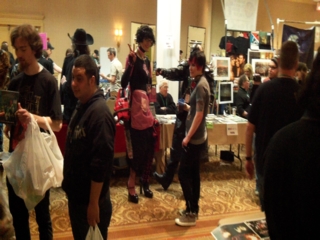 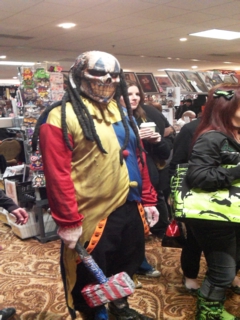