I attended the seventh annual Shinboku con this weekend. This is a new one to me. I was aware of it last year but decided not to go because I already had a full con schedule and I’m not as into Anime as I used to be. About a year after I got married I stopped watching regularly, and probably stopped buying shortly after that, it had gotten to mainstream; to popular.

Now before you accuse me of being a hipster, I’d like to point out that it’s not necessarily it’s popularity per se that is the probelm. It’s everything that goes with it. It’s the pretentious posuers that crop up who think thier Anime experts because they’ve seen Tenchi Muyo, but have no idea what Robotech is. It’s the 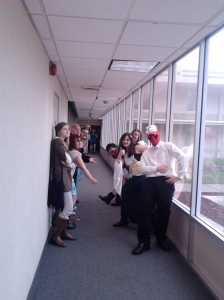 glut of crap anime that floods the shelves of best buy (or thier subsidiary Suncoast back in the day – a real perpetrator of this) that keeps people from discovering great stuff like Bounty Dog, or Bubblegum Crisis, or X.

I hadn’t expected much from this con, but decided to try it out this year, so I put on my one and only Anime shirt (Excel Saga) and headed over. The con is in my backyard – almost litrialy. I could walk to the hotel from my house. That’s a good thing and also a bad thing. Elyria isn’t known for it’s culture. That’s not quite fair, because there is some good stuff here, but it gets no press and doesn’t always get a chance to thrive.

I looked over the schedule and saw that there was some real organization here. It’s an ambitious con. A panel room, a main stage (which also doubles as another panel room. Sometimes you have to choose which one you want to go 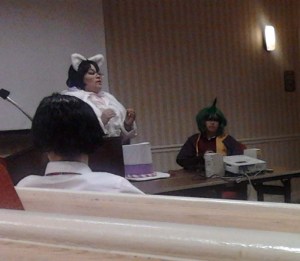 to), a video game room, a tabletop game room, a dealers room and an anime room. That’s a lot going on at any given time of day. I did check out the vendors room, but it was extremely small and not a lot that I was interested in. A real surprise that the vendors room was such a disappointment – it’s usually one of the coolest things about a convention. Still, there was definitely plenty of other things to see and do.

I started my day off hitting the cosplay panel. God bless the Ramada Inn by the way, for providing coffee. It was a cold rainy day and I wasn’t as bundled up as I should have been. There was a lot of basic info that I already knew here, but one interesting tidbit, I’ve never considered searching YouTube for cosplay tips and patterns like the moderator suggested. I like that. I may be looking into that for my next costume project….maybe even for some of the Hellraiser project. I headed 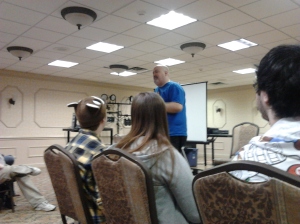 downstairs for my next panel, with voice actor Kyle Hebert. The downstairs thing by the way, is a bit of a problem, it’s got to do with the way the hotel is set up. The con was divided into two places. First flooor towards the front of the hotel, and upstairs towards the back of the hotel. I was constantly running back and forth to get from one event to the next. Still, that’s the Hotel’s fault, not the cons.

Back to Kyle Hebert.  He’s done several things I know about and was really fun to listen too. This was more of a random stream of consciousness talk rather 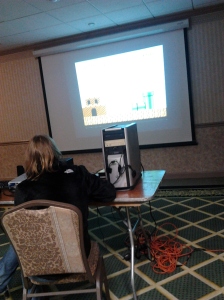 than a formal panel (he would be doing a voice acting workshop later in the day. I managed to catch about half of that before I had to leave for the day.) and it was interesting to hear him talk about every subject under the sun, including 3d movies, the Wizard of OZ, working in video games and his dream of being in a Disney movies (finally fulfilled when he did two likes as Ryu in Wreck-it Ralph).

Since it was across the hall, I wanted to check out the video game room. While I like video games, I generally suck at them. It’s the main reason I’m not a gamer. However, I love watching other people play…it gives me some of the experience of the game without ripping out my hair because I can’t figure out the next stupid puzzle. I stood in awe watching the new marvel vs. Capcom game, along with some of the interesting Kinect games being played. Skull girls was a fun interesting title, along with Portal. Someone had rigged up a MAME machine to the big screen, and Super Mario was  running for a good chunk of the day. Awsome. 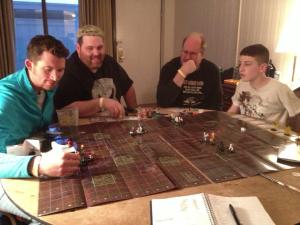 On the other side of the hall there was the tabletop gaming room. I didn’t spend quite as much time in there as I would have liked too. It’s one thing to watch over someones shoulder while they are playing a video game, but I just feel weird watching a war game or a role playing game. I guess I’m just not sure what the protocol is there. The gaming vendors were down in this room as well instead of the vendors room and that worked out well. I really wanted to buy one of the plushie 12 sided die, but this was a little too close to Cinema Wasteland and I’m still kind of broke.

Amongst the games, there was a Heroclix tournament scheduled, but unfortunately I had a conflict, my wife had a job that night that was going to 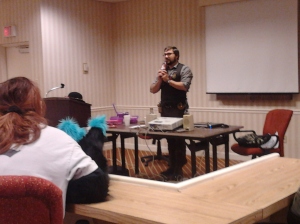 start about the same time as the heroclix tourney so I missed it. However I did run in to a couple of guys I know from clix beforehand and that was fun.

My next panel was the special effect makeup one. I do makeups frequently and am always interested in learning something new. That was half the reason I did the haunted house last year.  I learned a new recipe for blood that I may be trying out at the Lakewood Zombie Walk this year and got a great idea for how to do a life cast. That’s something I’ve really been wanting lately as I try to create more and 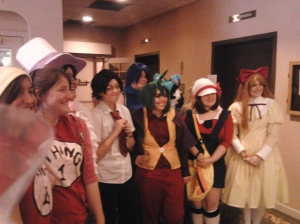 Usually I will fill up a convention blog entry with pictures of people in costume. Of course at an Anime con, cosplay is far more pervasive. I’ve always complained about the lack of cosplay at horror cons and even at Ohio Comic cons (I admit, I do seem to see more of it outside of Ohio). I knew I’d see more at an Anime convention, but I really wasn’t prepared for exactly how much. Honestly, I actually felt a little out of place.

If I had tried to take pictures of everyone in costume I wouldn’t have had time to do anything else! There were however, a few stand out costumes. 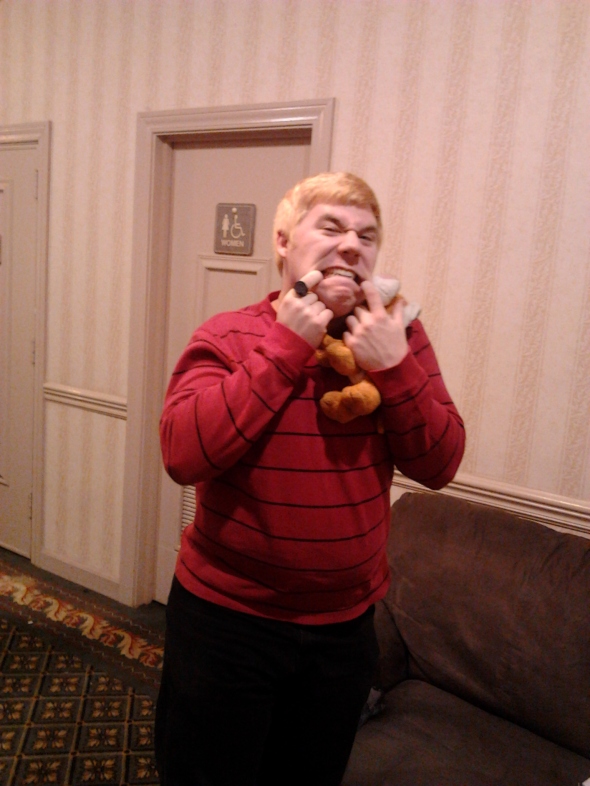 Calvin and Hobbes. Yes, he IS carrying around a stuffed tiger. He wanted the picture to be more like we would typically  see Calvin, so he made faces while I was snapping it. Note the Black Lantern ring???? 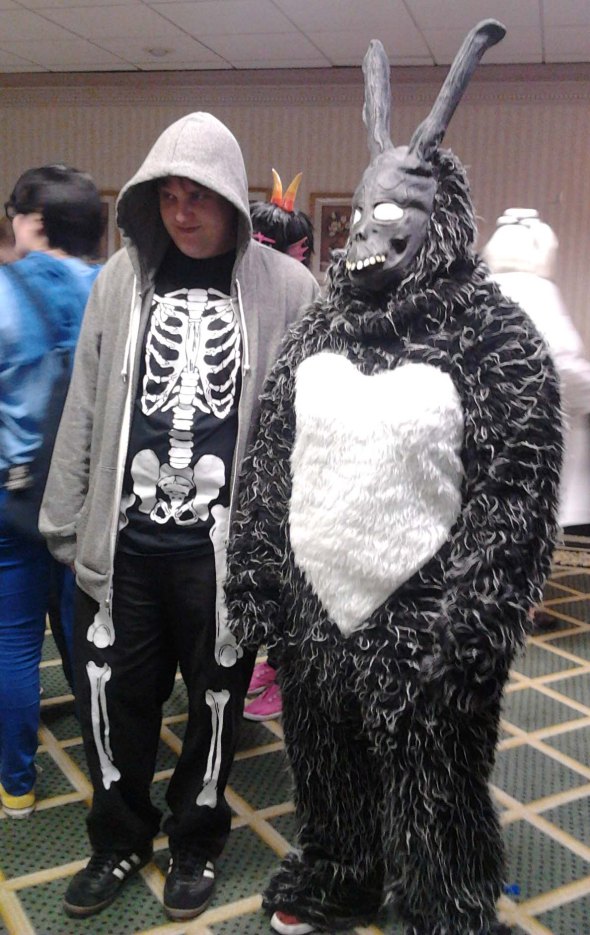 Donnie Darko. It’s a cult film for a good reason….I just wish I could figure out what that reason was. Very cool costume choices though. 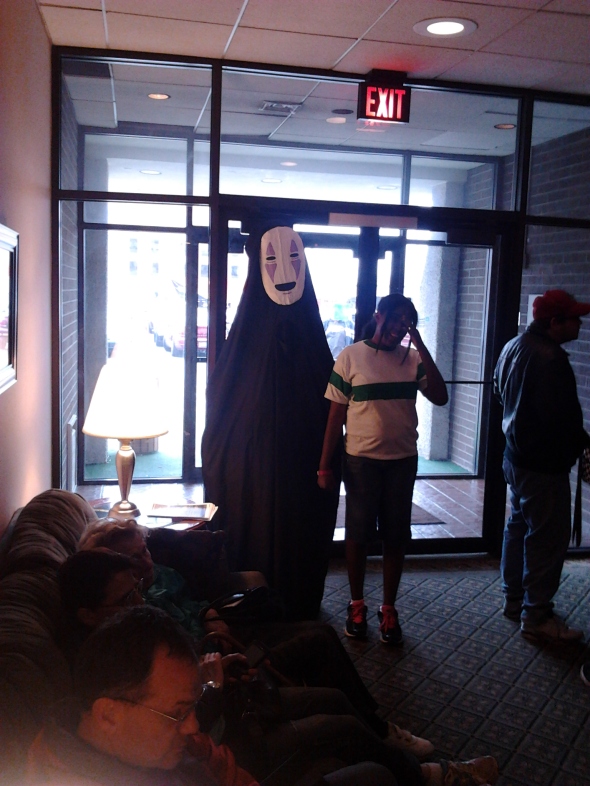 This No-Face from Spirited Away was just the coolest thing I saw all day. That’s 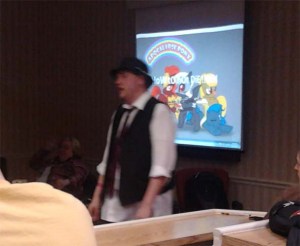 actually an average size girl in there. If you look hard you can just make out the black fabric covering the eyehole.

I managed to sneak back for the Zombie Apocalypse panel and I’m incredibly glad I did. It was one of the funniest panels of the night. A little out of control with ranting and some of the more outrageous humor from the evening (they were actually carding people for this one – I can understand that from the language alone….)

I ended the evening at the glow stick ball. Lots of good thumping music here, with a lot of video game influences. In particular I was hearing a lot of Skyrim playing. People were dancing, having fun, minding thier own business….

and that’s when the lightsaber battle broke out….. 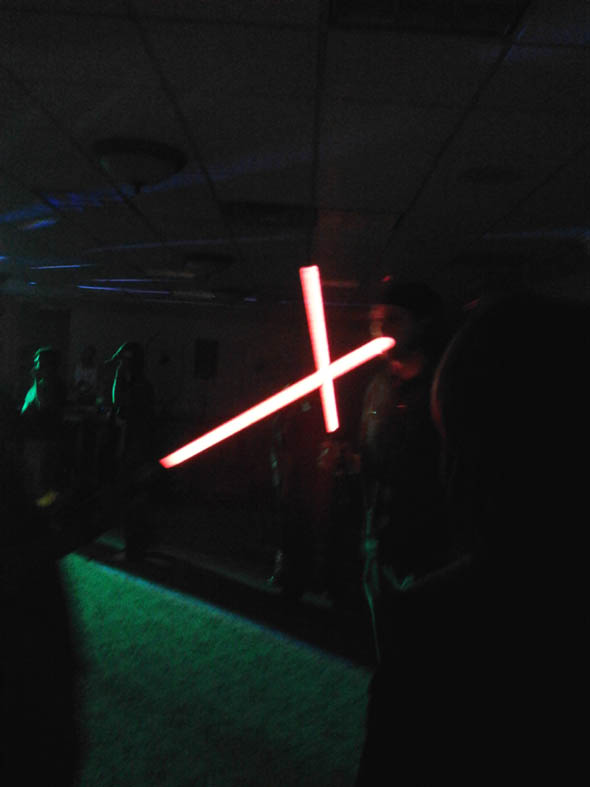 It was a well done con. Better than I expected, though there were still some rough edges. Still, this is exactly the kind of thing Elyria needs more of and in a lot of ways it reminds me a lot of why I used to be into Anime myself. I don’t think I can ever get back to that kind of passion for the subject, but this convention definitely has my interest and is on my radar. I suspect I’ll be back next year, if for no other reason than to support a good Elyria event. Who knows? Maybe I can dress up as a character from Violent Blue! (Do they make squirrel costumes in my size?) 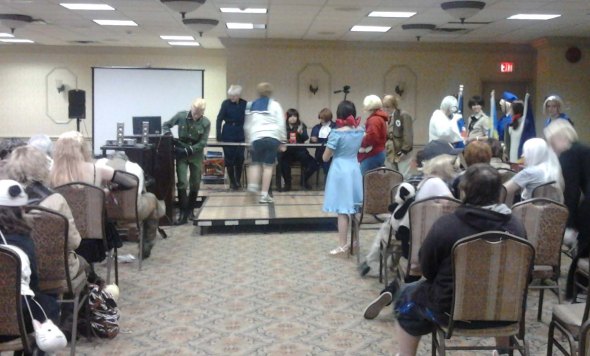