So when we last tried to make pins for the pinhead makeup, it was using liquid latex. That experiment failed miserably. This time we’re going straight to the modeling compuound, something I’m reasonably sure will work.

I use a product by Crayola (like the crayons) called model magic. It’s extremely lightweight and the consistency of clay. It dries hard, but still remarkably light, lighter than foam rubber even. The reason I had wanted to avoid using this was because I was going to have to roll each of those nails by hand…and yep. That’s exactly what I ended up doing. 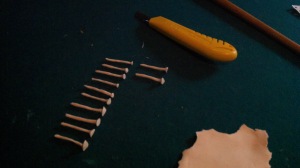 I had counted the pins on Pinheads skull and kept coming up with different numbers. I finally settled on 120. I expected I would end up making a slightly larger grid and not needing all of those, but better to have extras than not enough.

Finally, once enough pins were done, it was time to do a test run to see if they

would be light enough to stick on my face. First we draw the grid on my face so we know where to put the pins. this will also serve as a guide for the cotton scars I’ll add later. A dab of liquid latex at the bottom each, then some heat and time  waiting for them to connect with my face. In addition, I am planning on using shredded cotton to create the grid on my face. That will have t he added effect of helping to support the pins and hide the wide bottom that is holding it on to my skin.

The grid is going to be achieved by adding shredded cotton to my face. First you draw a line of liquid latex, then you slowly add bits

of cotton on top of it. Next you color it to blend in with the skin. When I actually do the pin head makeup, I won’t actually have to color the cotton since my skin will be white anyhow. To get it to look like a slice however, you need blood. The blood mats down the center and makes the edges look torn. For Pinhead, I plan to use blue food coloring instead of red blood.

Since I’m not in full makeup yet, I still did some of the cotton cuts, but colored them flesh tone and added a line of red blood in them so it gives kind of the effect of a pre-pinhead….it is just a test run after all.

The cotton cuts are going to take forever…I can see that just from the preliminary testing I’m doing right now. This is going to be a long makeup application.

Since it’s just a test appliance, I decided not to do the whole face, just half…it’ll save time, and still be proof of concept. I like how it looks, and the pins are working out just fine. The next step is goign to be the bald cap. There’s plenty of Model Magic pins left that I can glue them on to it….

but not tonight. I’ve already spent two hours rolling pins and another hour and a half just trying tout this makeup application. I’m loving the look, you can really see the beautiful symmetry of the pins, but I’m also getting a little tiered and need to do some Violent Blue for tomorrow. We’ll tackle the bald cap on anther night.