This review contains spoilers. Get over it. 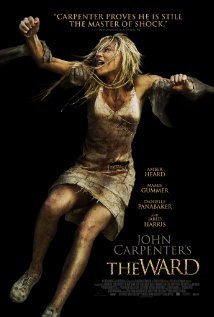 I was getting ready for Cinema Wasteland. I had taken Friday off from work, I usually do so I can sleep late in the morning and grab a nap in the afternoon, because once Cinema Wasteland starts – sleep is just not an option.

Amy and the girls had left for the morning and I was flipping through Netflix and came across The Ward. This was the latest John Carpenter film. I remember hearing about it a year or so ago…and nothing good. Most reviewers ripped it apart, with a lot of observations like “Carpenter is just in this one for the paycheck” and “uninspired” and “Unoriginal” Carpenter fans in particular wer incensed, acting like this was the worst Carpenter film ever, and wondering if he had lost his touch.

The bad review on Horror Ect. had pushed this to the bottom of my to-watch list, but it was a sleepy afternoon and it seemed like a good time to catch up.

It’s actually a nice ghost story that keeps you on your toes. The gore isn’t over the top and there are some torture elements there for the Saw fans. The monster isn’t particuarly groundbreaking, but sufficiantly creepy. I figured out the twist at the end – almost, I got a slight detail wrong. It’s Sucker Punch for horror fans but I was wrong about who’s dream it was. The jump scare at the end got me too.

The films biggest flaw I think, is that it’s perfectly average. John Carpenter’s name makes us expect a great deal more – and I’m not sure why. Not every Carpenter film can be a masterpiece like The Thing, or Escape for New York, or even the underrated ones like Prince of Darkness or the Fog. The Ward is certianly better than Ghosts of Mars or Escape from L.A.

I do have two small gripes with the film. I am completely at a loss when  trying to understand why this is a period piece. Period movies are hard. They require a great deal more attention to detail – it has to LOOK right.

This movie is set in the 60’s and I’ve got to tell you, this chick does NOT look like she stepped out of 1966. That hair is too curly and silky (I remember my friend’s mother telling uys about how she used to take so much time to straighten out her naturly curly hair in the 60’s because no one wore it curly at the time). The makeup isn’t shaped correctly. The colors are wrong. John Carpenter lived through this era, I’d expect him to get it a little better…..or perhaps just set it in modern times. The clothes are slightly better, but really they’re mostly nodescrpit. They could have come from any era. Other than a few shots of the TV and soem referances to Electroshock tharapy being revolutionarly, I just don’t get why this had to be a period film.

My other issue is the monster. Like I said, the ghost is adaquate. That mask really shouldn’t be shown in full light like that though. They try to clean it up with some CG and create a “Crawling ” effect on her skin, but it ends up looking a little to cheap. Cheap isn’t necessarily bad, Carpenter does well with cheap. But he would have done better back lighting this thing, or really giving some harsh contrasting shadows. There are tons of ridges on her face for the light to play on, wrinkles you colud get glistening effects from KY Jelly and really create a creepier atmosphere. I wonder if there just wasn’t time to set up the lighting correctly (still, a couple of strategically placed clamp lamps could have helped immensely)?

All in all, a very average movie. By the way, before I got around to writing this review I was pleased to see I wasn’t the only one who had recently watched this nad had this kind of reaction, BloodyWren over at horrific healing got his review up a couple weeks ahead of me! You can check it out here :  http://bloodyrenn.wordpress.com/2013/04/09/the-ward/