I started my Free Comic Book Day this year at Midnight. Well, actually a little before, 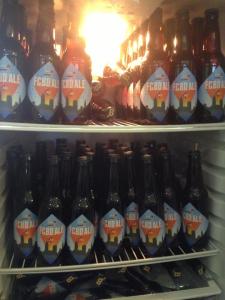 heading out to Carol and John’s comic shop for the Midnight release party.The midnight party features free comics, specially brewed drinks and food along with sales and costumes. I went to this a couple of years ago with my friends John and Carl, and remembered not liking it, but didn’t quite remember why.

The two and a half hour wait in line may have had something to do with it. I remember it being crowded, but not this crowded….and we were waiting forever. The young lady in the great Doctor Who shirt (Complete with a button that said “come along Pond!”) that I was in line with was getting a little worried that there might not be much left if we ever go in. (By the way, if your reading this, I owe you an apology. I was in a bad mood and didn’t realize we would be out there so long. I should have talked to you more and been friendlier. I was rude to just stand and read my book as much as I did). On

Facebook I joked with folks that we should have headed to the party and played a game of Heroclix while we waited. Seriously, there was enough time to get in a full game while in line. If I do this party again next year, I’m planning something like that. Cards or heroclix or SOMETHING.

Still, we eventually got in and I got my first selections, including the Cleveland edition of Superman. That was one I definitely wanted, especially since we’re celebrating the 75th Anniversary of the character – or trying to at least.

Madeline had ballet the next morning and we weren’t about to let her take off just to trot around town trolling for comic books with Daddy. We suited Lydia up and were

ready when Maddie got home at 11. We tossed her costume on, packed a lunch and headed back to Carol and John’s for the costume contests.

We had no idea that half of the places we went for Free Comic Book Day would be OUT by the time we got there. Perhaps we need to start earlier, but it also seemed like there were a bunch more people out this year than before.

I saw the  line at Carol and Johns and my heart sank a little. It was as long this afternoon as it was at midnight. Ugh. The girls wouldn’t last an hour or two of waiting like that. Still, we were there in time for the costume contest, so the girls got their numbers and headed up. Maddie and Lydia were in different age categories, so they weren’t competing against each other. I think I’ve very glad for that.

To my great delight (and perhaps a little surprise) both of my girls placed. Lydia got third (and lost out to the cutiest set Power Puff girls EVER) while Maddie got second in her division. I couldn’t be happier.

Next off, we headed out to Parma to swoop down the Polish corridor. B and L comics  was out, however  he had a few ones from last year and older on the counter to try and still have something for people….my girls and I were at the counter making our purchases (we raided the .50 box) and were asking about which free ones he still had and folks were reaching around us to snatch them away before my two little girls could get anything! How rude!

Traffic was bad enough that we skipped Northcoast Nostalga…a shame too, because

they always have great discount bins – .25 and .35 bins, and I always rummage through those. York was running out, but the girls got some Strawberry Shortcake there and we bought some Trinity (because they had Wonder Woman on the cover). I also got my Uglydoll comic here. This was just the coolest offering the FCBD! The girls loved looking at the statues and figures. York was running out too, so they pulled stacks of old issues from the back and set them up on the free table so everyone could still get something. Very cool guys. On the way to our next stop, I became aware of Maddie talking in the back seat. Not to me….no she was reading on of the strawberry shortcake comics she had just gotten to her sister.

Thank God for Comics are Go! in Sheffield. They still had a decent stock and had save me one of the FCBD  Iron Man 3 heroclix! You guys saved the day. Seriously.

The girls had been getting a little discouraged. The other thing Comics Are Go! managed to find for me was a copy of the Walking Dead comic for this year. Not one place we went had that one still in stock. In fact, Mike ran into the back  and dug that and a Judge Dread out for me I wouldn’t have gotten these comics otherwise. Then again, that’s one of the things about having a shop you go to regularly. In fact,  I think next year, we may mostly just do Comics Are Go. (Maybe the midnight party at Carol and Johns, but maybe not).

While we were in Comics are Go! Maddie kept looking around at the toys and other

comics, and she discovered the My Little Pony comic book. She asked me if we could get that one too, and I said yes (like last year, we want to buy something at every stop to do what little we can to support these places). She was also looking at the figures and discovered the Wonder Woman line – A Circe figure and a special agent Diana Prince figure. She brought those up the Scott, the store owner and asked why the boxes said “Wonder Woman” when it didn’t look like Wonder Woman inside. He smiled and explained who the figures were. It was unbearably cute.

Of course we dressed up. Me too. I tried something different this year, my costume was Perry White, with Maddie as She-Ra and Lydia as Batgirl. Funny, Lydia’s always

refused to wear masks, but this year she came up to me first thing in the morning and asked me to make her a mask for her costume! Rushed in to the basement to find some foam and elastic, but we got it done!

By the time we got home we were all tired and Maddie was eager to tear into the Lego set she won in the costume contest. The girls asked for a Wonder Woman cartoon so I fired up Netflix and turned on the Wonder-Woman centric episodes of Justice League. We played with Legos and plowed through our piles of comics. We didn’t bring home as many this year. The girls had about seven each. I

had about twenty. I know they were a little disappointed by that, but we still had a fun day out and I still had plans for the evening. After all, what better way to end FCBD than with Iron Man 3 at Amherst Cinemas? I still had a dollar left over from comic book shopping and managed to scrape together two more dollars in change (remember the days when you could still hit a movie using the change you found in you couch or car seats?)

I got to the theatre just before the movie was supposed to start. Just in time to see them put the “Sold Out” sign up.

Comics shops running out of comics? Comic movie running out of tickets? I’m beginning to see a theme here. Time to pop in the Scott Pilgrim DVD I borrowed from the Library and try again tomorrow.

I did make it in on Sunday. Probably the best Iron Man movie of all of them, I prefer this director. However, while I liked it better than any of the other Iron Man movies, but I still  think it needed 30% more Tony-in-the-suit. It seems like the entire point of these films is to get tony out of the armor….I get that they are trying to make up for it by throwing in War Machine/ Iron Patriot, but honestly, for a film called “Iron Man” Iron man is actually not in it very much. I think we had more screen time with Tony-in-the-suit in Avengers. And poor Tony, he was getting tossed around worse than Bruce Campbell in an old cabin.

I really like the Iron Patriot suit though. I’ve got a bunch of foam in my attic. Wondering if I could make a suit….I think my cosplay for Lake Effect Comic Con might be Tony with just the arm and leg armor from the escape sequence. We’ll see.

We’ll close  this with some photos from the midnight party and FCBD. Some of these are mine, some are culled from around Facebook. And remember, new Violent Blue is up today! 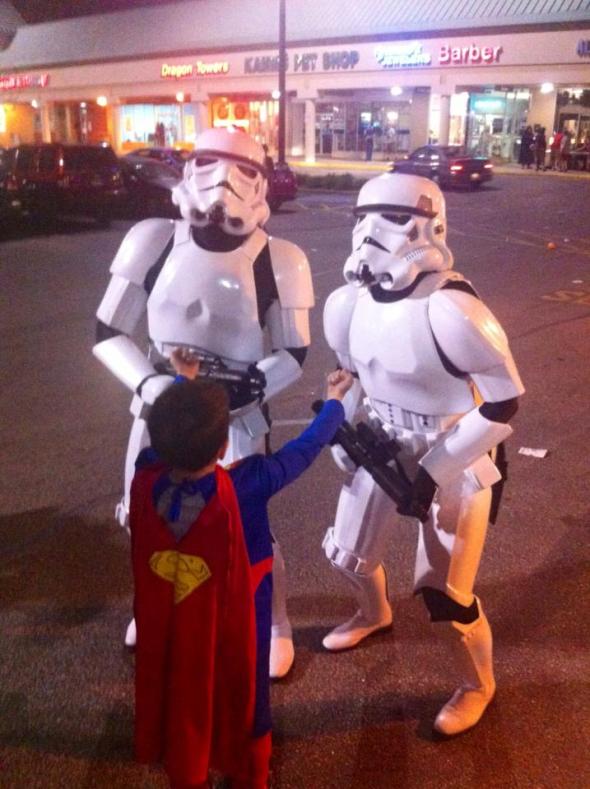 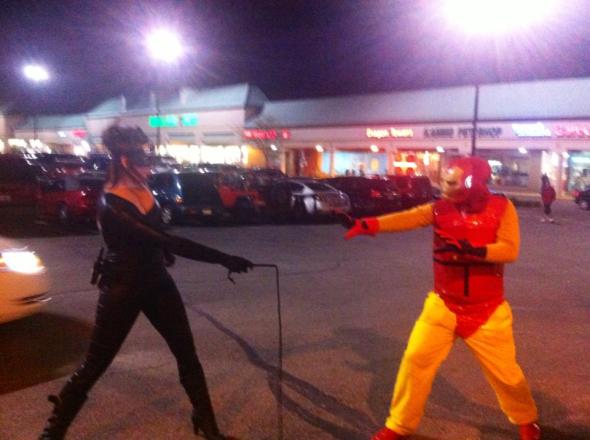 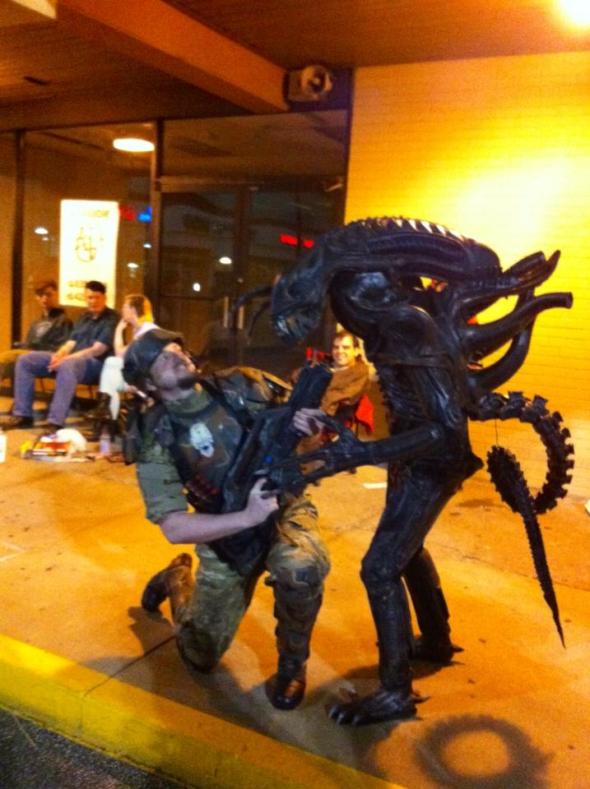