Injustice : Gods Amoung Us

I went out of my way to read all the Injustice series as they were putting out the comics (tie-in). It was enough to get me to really pay attention to the game when it came out.

It’s been a bit, so most people have had more than enough time to play it and get to know the game. It’s the kind of game that appeals to me because I really don’t have to

think too hard about it. It’s a fighter that I can drop in and out of real quickly. my girls love fighting games too and a superhero fighting game with Daddy is just one of their favorite things ever.

One of the other things that makes it so noticeable is that it’s a DC game. Good DC games are few and far between. Marvel still cranks them out with regularity (though not quite as often as I remember them doing in my Genesis days) but DC seems to have problems making anything that doesn’t have the words “Batman” or “Arkham” really work outside the comics.

The new costumes are neat, and not something I’m going to get up in arms about. It’s an HD video game, they want some more grain and texture on them. I’m not 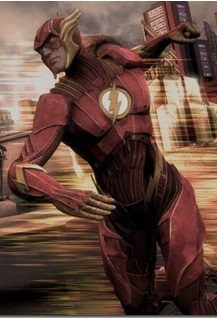 expecting exact duplicates of what we see in the comics- though I will say the Injustice comic prequel really did better jobs on the costumes. In fact, I prefer the Injustice comic version of Superman’s costume to the New 52 version even.  I’m not digging the shape of Batman’s mask and evil Flash looks downright silly – still Flash can be a hard costume to get right. The lightning motif keeps it right on the edge of cool or lame as it is, and it doesn’t take much to push it all the way to silly.

The Flash TV show got it right. The JLA pilot….not so much.

Another interesting thing about the look – while Lex Luthor does don the armor occasionally, he spends most of the game looking like Lex Luthor : CEO of Lexcorp. I LOVE that. Even more interesting to me is that they seem to have patterned his face after Bruce Willis. Maybe that’s just me, but seriously, other than those eyebrows….

The other thing about the game that’s very standout is the Joker. He’s actually a playable character at one point in the game, and that’s unique in of itself. It’s not Mark Hamil though, and believe me, he is missed. This isn’t Richard Epcar’s first time out as the Joker – he previously did the voice in DC vs. Mortal Kombat. You can see right away he’s doing something very similar to Hamil, and that’s cool. There are a lot of moments, every few sentences where you hear an inflection that tells you it’s not Hamil, but considering how long he did it, this is to be expected. I think it’s really col that they are trying to keep a similar style, instead of going a completely different direction. The Joker has some of the best lines in the game – “Why does she hate Pancakes?” was one of my favorites. 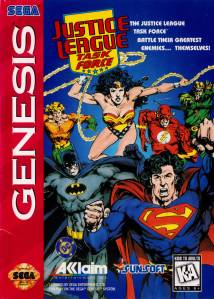 When we come down to it, my only real problem with the game is simple : We’ve seen this story before. Justice league or JLA from alternate universe is evil and good JLA has to defeat them. It’s been done a hundred times- heck, it’s even been done before in the game world. Remember Justice League task force for Genesis and Super NES? Still, it’s a very minor gripe. After all, this is a fighting game, and the storyline, while derivative, is well done. Far better done than I would expect coming from a video game anyhow.

The replay is alright, though I’m not sure how often I’ll return to it. I can’t see myself going through story mode again, and I don’t really have the stick-to-itness to unlock all the characters, but standard  Vs mode is always around for a quick pick up and go when I’m not drawing Violent Blue…. in fact, I think I hear Superman calling my name right now!