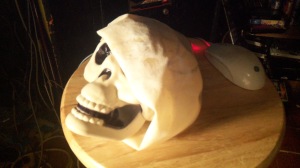 Today we’re back to the Hellraiser makeup. Now that we’ve created the pins for the face (as we saw the last time)  it’s tiem to address the rest of the head. In the past I’ve simply driven nails through a plain old bald cap and called it a day. The nails were real and looked just fine. In this case however, that’s not going to work. What I’m going to need on the Bald cap are nails that match the ones that are on my face.

The natural route was to simply use the exact same nails I had created out of model magic  for my face and glue a bunch of these to the bald cap. I had made a whole lot of extras with this in mind and so I went to work gluing them on.

They ended up a little floppy 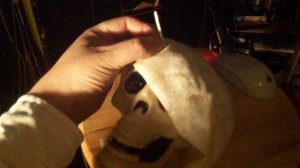 , but so were the ones I had already made for my face. It really didn’t matter as long as it all matched. I tried on the cap and the pins spread evenly. Everything looked good.

Then I took the cap off.

Pins started to break off and flew everywhere. The model magic was too light to take the shape changes of the bald cap and constantly broke when taking it on and off. Looks like I’m going to have to find something else to try with this. Time to go work on some Violent Blue while I ponder this.