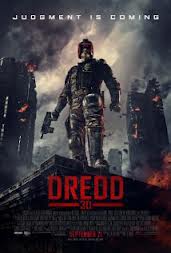 I finally got around to catching up with Dredd. Really, I was hoping to get to this earlier, but other films just seemed more pressing.

I had been told by several friends that this movie is “ultra-Violent”. See, the problem here is that phrase has been used so often it’s lost a great deal of it’s meaning to me. What actually qualifies as “Ultra Violent”?  It’s not just a bunch of shooting. To me there has to be some flesh ripping. The Expendables is a violent movie, but not really THAT violent. You see a lot of guns blazing and a lot of people falling down, but you don’t see a lot of blood. No red spray, no torn skin. Robocop…that’s an ultra violent movie. Lots of guns, and TONS of entry wounds and exit wounds. No one ever gets shot just once there, it’s always multiple shots, and multiple squibs going off and every one of those squibs is full of red karo syrup.

So Dredd? Actually, yeah. Ultra violent. Lots of head shots….actually lots of head explosions….gives Scanners a run for it’s money. I loved seeing the slow-mo flare hit the inside of the guys mouth and explode….definitely enough to satisfy the gore hounds as well as the action fanatic.

It’s a shame then, that this came out so close to The Raid : Redemption. They were in production close enough to the same time that I don’t think there was any copying going on, but really it’s the same story, though with more guns and the familiar comic book settings of Mega City rather than the generic apartment building we see in The Raid.

I do have to wonder why they choose this setting. It seems like it works against an introductory film, and keeps us from really exploring this world. It would work fine for an established series, but I think it holds the movie back a bit. And make no mistake, this IS an introductory film. Forget the Stallone Judge Dredd. That was sole a Sly vehicle where the only thing they really got right was the costumes (those costumes REALLY are better than the ones in this movie, but then again in the Sly film you only see them in those costumes for what, ten minuets?) and it LOOKED like a summer blockbuster movie. The sets had that….LOOK to them, the scale was just a little off and obviously painted. Something about it just hits your eye wrong (you see it a lot in those kind of movies -the Original Total Recal has the same problem). Dredd 3d looks real. Everything is gritty and stark and just.. better looking. (everything but the costumes…btu I digress….)

Really this film came out at the wrong time, and got lost amongst the Avengers and Dark Knight. That’s a real shame because it deserved a chance to really shine on it’s own and a release in the spring instead of summer might have given it a better shot a success.

Dredd is definitely worth a watch if you catch it on Netflix. Not sure it’s worth a buy unless you’re a fan of the series or really into violent Sci-Fi, but I’ll admit it would look rally good on the shelf right next to the unrated criterion cut of Robocop…..( and a film version of Violent Blue?)