In retrospect, I really believe that Malibu should never have gotten into superhero comics.

For a very long time, back through the 80’s they have a very good business model, similar to Dark Horse. They republished old comics, ran licensed properties and published titles for other companies. In fact, Image comics stated as an imprint published through Malibu (That’s why you get vol1 and vol 2 of titles like Youngblood and Wild CATS – the first volume was published through Malibu). Image would later pick up on Malibu’s old 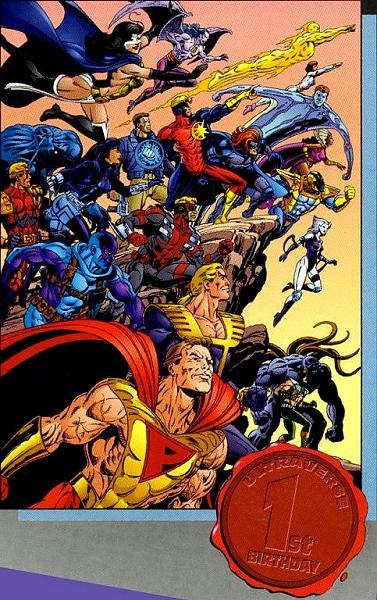 strategy and publish books for indie artists at a flat rate depending on the length of the run (Brian Michale Bendis did a lot of his books through Image this way. MVCreations  published the first run of He-Man and the Master’s of the Universe this ways as well).

But during the comics boom of the 90’s, everyone wanted a shared superhero universe and Malibu threw thier hat in the ring with the Ultraverse. Many of us remember Ultraverse heroes like Prime, drawn by Norm Breyfogel or Nightman, who had a brief and ill conceived TV series created by Glen Larson (of Knight Rider and Buck Rogers fame).

Not a lot of people remember the Solution. I don’t even remember seeing this on the racks in the 90’s. The series ran 18 issues and I’ve since found all of them in quarter bins.

The Solution are heroes for hire, willing to take missions for a fee. In Russia, nuclear bases are being attacked by Quattro, f 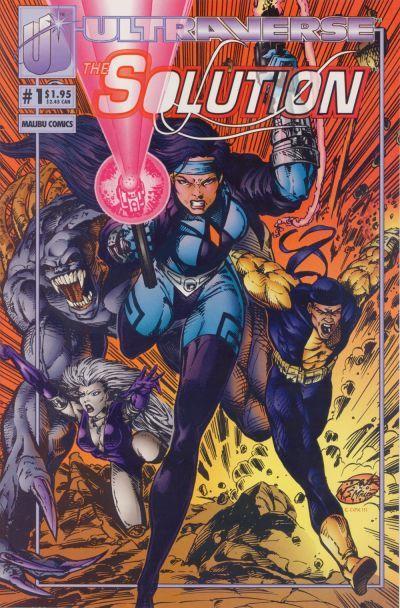 our ultra-powered mercenaries, and their nuclear warheads are stolen. Meanwhile, the Solution are in Hong Kong fighting the Dragon Fang, the world’s largest Triad group (and the people who stole The Solution’s leader’s fathers company. This is a vendetta). Eventually, an agent of the KGB tries to hire the Solution to stop Quattro from keeping the warheads.

Tech is the leader, in combat she’s your standard guns and ammo kind of girl, but what sets her apart are her skills as a hacker. She has wetware tech implants in her skull that allow her to cyberpunk any computer system wirelessly (and this was back in the days before broadband or wireless internet.)

Shadowmage is, predictably, their mage. She’s a trans dimensional being and In ever exactly caught onto where she was from – part of the Ultraverse continuity I wasn’t familiar with I think. Their brute Vurk is also inhuman, an alien who has a counterpart on the bad guys team. Finally there’s Dropkick, their martial artist.

Despite seeming like a cookie cutter superhero team, this group actually works together well and I suspect there was some thought put into what kind of Arch types to compile here. Tech is a reasonably original concept, and one not used a whole lot even today.

I like this series, but it is standard superhero fare. There’s some fresh ideas, but not enough to ever expect to see this title ressurected. Marvel bough out all the Ultraverse characters in  1994, for the sole purpose of keeping the Ultraverse out of DC’s hands.  DC wanted to buy the Ultraverse.  Marvel felt that a DC/Ultraverse  competitor was too much of a threat at the time, and would knock them down to the number two publisher in the field. Qusada has adamantly said marvel won’t do anything with The ultraverse, and even though he’s not really in control over at marvel any longer, it’s a fair guess that The Solution is gone forever. Still, they left us 18 great issues to enjoy. In fact, I think I’ll go grab a couple of those after I finish some Violent Blue here….