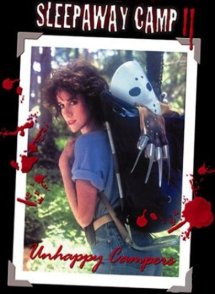 There are some movies that benefit from sequels. Nightmare on Elm street, while a good movie on it’s own right, slides in line nicely with the rest of the sequels. I don’t think Evil Dead and Friday the thirteenth can’t really exist without their sequels, they NEED to be series.

There are other films where the sequel actually diminish the source. I can’t abide any other the TCM sequels, even though I do like the remake.

I’m not sure what to do with the sequels for Sleepaway  Camp. For the longest time, it was really just #2 and #3. In fact, my first exposure to this series was when my friend Mike got me the box set (the one with the red cross on it that was quickly pulled from shelves) which included the first three movies.  Even then though, I

always tended to watch the first movie separately from 2 and 3. It’s a totally different film, with a giallo edge and a twist at the end that could never be replicated in this series no matter how hard you tried. It would be like attempting to get that same shock from the twist at the end of the Sixth Sense – you can’t make a sequel for that stuff.

Still they tried, going down the standard slasher route, and maintain a tenuous connection to the original. Unhappy Campers and Teenage Wasteland are light, bloody fun, but not even in the same class as Sleepaway Camp.

The box set also came with a fourth disc, unused footage from an aborted fourth film, tentatively called  “The Survivor”. It looks like they got a day’s worth of shooting in with little or no script and realized they didn’t have anything or any funding and just 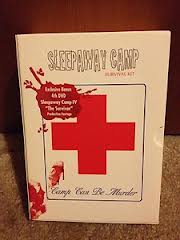 gave it up. I recently became aware that this  footage was cut with footage from the other movies into a full feature, essentially a film version of a clip show. Amazon was printing these on demand for a while, but the response was overwhelmingly negative. I can see why, if you don’t know what you’re getting into, especially if you are hoping for this “Survivor” movie to have finally been completed, this could easily be a huge let down.

I rather enjoyed it. It’s kind of like watching the three movies condensed into a little over an hour instead of spending over four hours on it. It makes good background and good party viewing. On the other hand, it’s really the lowest point this series could sink to….or is it?

There’s a short film out there called “Judy”. You can find it on the Sleepaway camp website. The premise is the mean-spirited antagonist from the original film didn’t die at the killers hand –logical considering all we saw happen to her was a brutally creative use of a curling Iron. Traumatic, but not fatal.  The short has a slightly too amateurish feel to it, it’s main credibility coming from the fact that they got the actress from the original movie to reprise her role as Judy. It’s cool as a curiosity, but that’s all. (you can find it here http://www.sleepawaycampmovies.com/judy.shtml)

That leaves us with possibly the most “official” sequel and one that ignores all the others.. Return to Sleepaway Camp takes the material the most seriously of all the sequels, trying to recreate the mystery and throwing red herrings around to keep you 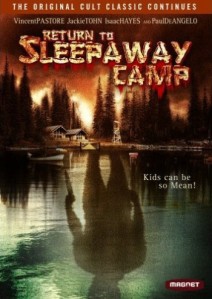 guessing. The problem is, like I said above, you just can’t recreate that twist from the original and really, the whole movies hangs on that. The last thirty seconds of Sleepaway camp are what make it more than just another horror flick and keep it memorable. They try in Return, but honestly, every  potential twist, every misdirection, all of it can be seen a mile away.  It’s a nice reunion with some of the original cast,  but it fails to recreate the shock and suspense of the original, and for that reason, I’m more likely to watch 2 or 3 (or now, possibly the clip-show-lie #4) for the lighthearted nature of it. In the end though, none of it is Sleepaway camp, not really. It’s a movie that should stand alone, and any kind of a franchise is just a bad idea.