In Defense of Star Trek : Insurrection

Today we’re talking about what is actually my

favorite of the Next Generation movies. I’ve never understood the hat this movie gets. I have heard more than ne person tell me this is a worse movie than Star Trek Five.

This is frequently used as positive proof that Jonathan Frakes can’t direct. Funny, considering he also directed what is arguably considered the best film of the series too; First Contact. I do see his flair in it. The zooming shots, a lot of camera movement. Many of the set-ups are simple, but certainly not bad.

This film gets lambasted for it’s humor – as if humor was never a part of Star Trek. Why do I never hear that criticism leveled at “The Trouble With Tribbles”? It’s really more than just humor in this film, it’s familiarity. We should be comfortable enough with the characters that it’s a reunion. If you’re expecting 2001 from a Star Trek movie then I don’t know what you’re thinking. They tried that with the first film. It didn’t work. To be fair, by this time Trek movies had devolved into simple sci-fi action flicks…and  that includes Generations. and yeah, most of them have EXACTLY the same ending. This is still one of the better versions of it though… 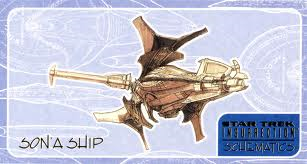 The ships in this film are gorgeous – and it’s one of the first times we really some serious new design work  in TNG in ages. A pity that the interiors look like any other Okuda hell, but those ships hulls are beautiful and a nice departure from First Contact.

Speaking of First Contact- I like the movie, but it really doesn’t have a story.  No,  think about it. The characters drift from one engagement to the next – it’s a video game. A fun ride but no real plot. This movie has a narrative, growth in

the characters (which we sadly abandon at the end because everything has to return to the status qoe) and some good plot twists. It has great actors like F. Murry Abraham and Anthony Zerke.

If the gags bug you, ignore them. Try watching this for the romp that it is and visit with these characters we really grew to care about. There’s not to many movies in the TNG film period and it’s a shame to have to throw this one out.