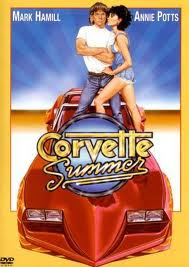 Corvette Summer from 1978 gave Mark Hamil something to do between Star Wars movies. It also stars Annie Potts and actually has a small role for Danny Bonaduche!

From IMDB : High School Senior Kenny Dantley’s only love in life is cars. For a shop class project, he and his classmates build a Corvette (“Stingray”). The car is a big hit — so big, in fact, that gets stolen! Kenny, having fallen in love with the car, sets out on a summer-long adventure in Las Vegas to find it. Along the way, he meets up with a “hooker-in-training” named “Vanessa”. The two encounter danger and romance as they try to steal back the Stingray.

I don’t have a lot to say about this movie. To say Hamil’s character is stupid is an understatement- there were times I genuinely wondered if he was supposed to be mentally handicapped. Not plastic helmet short bus level, just a slight retardation. He’s completely unlikable and the premise is ludicrous without being funny. The car is ugly by the way and Annie Potts is way to nice to be a hooker.

I miss the days of late-night UHF movies, because that’s a perfect way to see this – and you really should It’s a great bad movie, perfect for background noise or party screenings. It’s something everyone should see, but you’re going to feel ripped off if you have to spend any money on it.