It’s been nearly a week now and I’m still trying to get my head around the death of Dave Brockie.

I’m not a fan of GWAR.I get it, it’s transgressive art (and let’s face it, I like transgressive film – so I understand liking that kind of music). I kind of like the idea of it, but the music doesn’t appeal to me.  Dave on the other hand really did appeal to me. He was funny and friendly. I liked seeing him do guest spots and really enjoyed the bits he was doing on Holliston as Oderus. The last time we talked I was trying to put him in touch with the Danny Bonaduche show (Danny always talks about GWAR – but half the time isn’t entirely certain that’s who he’s talking about…) and I’m so sad I’ll never see that interview happen. I’m going to miss this guy. 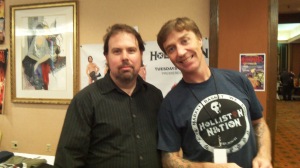 This entry was posted on March 30, 2014 by mathias42. It was filed under Uncategorized .