So yesterday we ran this strip over at Violent Blue.

I don’t want to hate this movie. 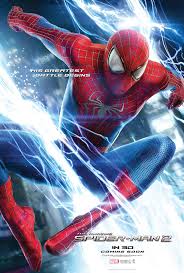 I really questioned whether I would review it because the problem is this can not possibly stand up on it’s own. This is  the second film in the Amazing cycle and it’s inevitably going to draw comparisons from the Rami cycle. The second Rami movie is the best of all the Spider-man movies ever. More to that point, I have no problem saying it’s one of the greatest Superhero movies ever made. In fact it was just on TV over the weekend (capitalizing on the release of the new film) and it absolutely holds up.

I liked Garfield as Peter Parker in the first film. I thought Toby was a better Spidey though. More light hearted and fun. I hoped Garfield’s Spidy would grow on me, especially since they got the costume right this time. Sadly, it was the opposite. His Peter has gotten more grating and that stupid Bronx accent (is it meant to be queens? It doesn’t sound queens to me) really gets ramped up here and drives me nuts. Not as bad as the Dancin’ Toby sequences in 2 and 3, but not fun.  Peter is too moody. Too brooding. This isn’t Batman. Spider-Man looks best in the sunlight and happy.

I also don’t buy the Peter/Harry relationship. This needed to be addressed in the first movie. Harry belongs with Peter from the word go, bringing him in cold in the sequel just feels tacked on. What a coincidence Peter just happened to be friends with the richest kid in New York….

Harry’s completely unlikable in this by the way and that’s a shame. The tragedy of Harry Osborne is that he’s not a bad guy, he’s been twisted. If you’re not rooting for him to rise above it, then it doesn’t work. And I’m not. I don’t like this Harry.

He’s not alone though. I HATE Aunt May here. God she’s useless in this series. She’s pathetic…nothing more than a dialogue delivery system. May is supposed to be a dichotomy – old and frail with a shocking amount inner strength that can’t be measured. I mean, they couldn’t even be bothered to put a white WIG on Sally Field!

Look, I have issues with the Rami cycle. I never liked his casting of Kristen Dunst and never really liked his version of Peter Parker. I think his inexplicable need for every villain to have some sort of relational connection with Spidey was ridiculous. But for the most part….for the most part he got it right. Aunt May and J. Jonah Jameson looked like they stepped right off the comic page, and their characterization was so dead on that they stole the show. Even though he didn’t have the right look, everything else about the Green Goblin rung true. Norman and Harry Osborne were perfect updates (and they LOOKED related by the way). Rami got  the relationships right. He understood the characters. Most importantly, he loved the source material. He loved the comics. Everything else comes from that.

I don’t think the current producers love the comics. I don’t think they get it. In fact, more and more of this feels like film by committee. Everyone has input. This movie in particular drops so many names it’s transparent that it’s just designed to be a springboard to other things…and that fails to entertain.

I want to like this. Remember what I said about them really understanding how to use effects? It’s still true in this entry, but this time it’s par for the course. I don’t see anything that really blows me away. They don’t have the goodwill of everything being shiny and new. They had to deliver a great story, but they are trying to do too much to achieve that.

A lot of what I had a problem with the first time around is still there. Actually most of it has been kicked up a notch, such as treating Spidey like a grim avenger. Instead of repeating it all here, I’ll just refer  you to my post on Amazing here : https://argocitycomics.wordpress.com/2013/02/25/amazing/

If you haven’t seen it, wait for it to hit redbox or Netflix. Better yet, just pop in the Raimi films and go from there.