Before we get into the metal bikini bottoms lets take a quick moment to to the upper arms. This is another soda bottle and some foam.

We wrap the foam around the bottle and voila! arms done.

Next metal underwear. This is two pieces, the back with the foam g-string, and the front brace that glues to the back in two places, a seam at each hip, and some metal bling scavenged from an old hard drive. 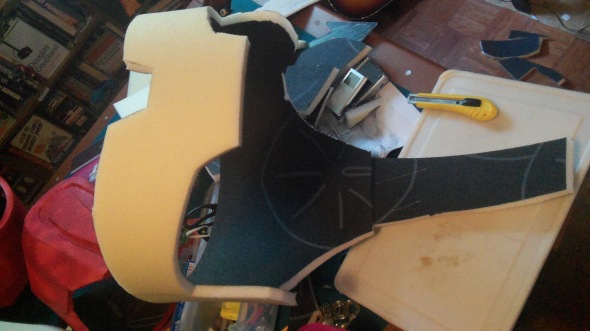 In fact, while we’re at it, let’s just paint up everything that we’ve made so far…..

I’m actually quite happy with it so far.

With the briefs done, it’s time for the mid section. I’m envisioning it kind of like the middle of a storm troopers outift.  We’ll see  how that works out next month!