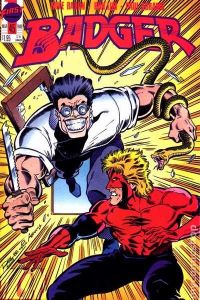 As far as obscure titles go, this one is a little more mainstream. Badger has been floating around the comics world for a few decades now, every once in a while popping on to the shelves.

Norbert Sykes is a multiple personality disorder, with the main persona being the superhero Badger (who draws his mark on all of Norberts cloths). Badgers not alone in that head of his though, he has 7 multiple personalities, each with their own distinct personalities: Max Swell – a cultured gay man Emily – a nine year old girl Leroy – Norbert’s dog that was shot by Larry when he was ten Pierre – a french psychotic serial killer Alice – a poet Gastineau Grover DePaul – a black man from the southside of Chicago

Badger also talks to the ghost of celebrities such as Warren Oates, Bruce Lee, and John Wayne….to name a few.

He lives with Ham the weather Wizard (an ancient Druid) and his Psychiatrist Daisy and hilarity ensues.

The series ended with #70, but several publishers have tried revivals of it;

Dark Horse actually published two miniseries featuring different versions of the Badger’s origin: the four-issue Badger: Shattered Mirror, a “serious” take on the Badger’s origin, and the two-issue Badger: Zen Pop Funny-Animal Version.  I love Jill Thomson’s art in Shattered Mirror, but really, badger was never meant to be a comic this serious. Zen pop on the other hand….it’s funny but it just never seems like they respected the character.

In 1997, Image Comics  gave it a try running 11 issues of a black and white series. It failed to attract much of an audience. The art seemed to cramped and the stark black and white just didn’t suit the character. Finally, in November 2007,IDW  reprinted a series of trade paperbacks of old issues, as well two new Badger stories: a one shot, Badger: Bull, followed by a new mini-series, Badger Saves the World which started in December 2007. Saves the world did nothing for me – it just didn’t feel like Badger, and I never found an issue of Bull.

It’s a shame because this character deserves better, but the old First Comics runs till pop up in discount bins regularly and the reprints are great, and nicely recolored. Try out some of the individual issues first and see if it’s for you, but I highly recommend those trades!