Peter Capauldi (Spoilers. Just move on if you have to) 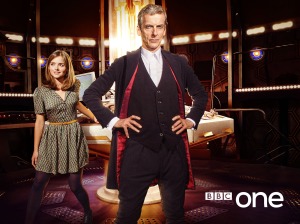 I’m just not sure what to think.  I wonder if that’s a bad thing?

It seems like I was just doing this, reviewing a new Doctor in a new season of Doctor Who. There’s not doubt, I bought it. I totally accept Capaldi as the new  Doctor. This is a good thing because it took a full year or so for me to accept Matt Smith in the role – and that was weird. Smith really always felt like he was a kid in a costume playing at the role until that big speech in “The Pandorica Opens”. It was there for the first time I could actually see the Doctor in him. It got better as time went on, particularly in the last year or so we could really see the ancient being in the young body. The old man with a youth’s face.

With Capaldi it’s instant. He feels like the Doctor. He’s confidant in the role, even as he tries to make us wonder what kind of person he is. This is a tactic that was already tried with both Colin Baker and Paul McGann, and it didn’t really work for me either time. 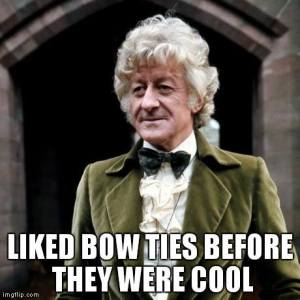 It almost seems like they are trying a little TOO hard to make you distrust Capaldi by making him abandon Clara. Twice.  Sorry, but there’s better ways to distinguish this incarnation from the others and better story devices to make him edgy. Nice pointing out how dynamic his eyebrows are though.

I’ve been optimistic in the year we’ve spent waiting for this. I mostly liked the costume, enjoying the similarities that his look has to my favorite Jon Pertwee. So much so, that I really kept watching for a similar persona. I saw a LOT of Pertwee influence in the Russell T Davies era, not quite as much in the Moffat era but enough that it’s still there and I’ve always loved it. Capaldi seemed to be heading that was as well from the buzz, but I actually don’t see it in the actual episode.

I kind of wish he had something on his neck too.

Honestly, I know, it seems like I’m never pleased and I’m overanalyzing – it’s Sci-Fi. That’s what we DO. But seriously, as much as Matt Smith’s bow ties bugged me (until he started wearing a vest. THAT costume, I loved), the buttoned up collar feels empty to me. I would have loved it back in 1992 when that was a common look, but not so much in 2014.  I hope it’s not going to be one of those little bothersome details that just drives me NUTS.  It’s made even more frustrating 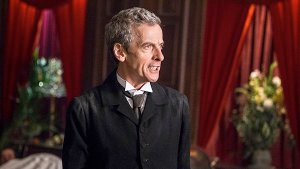 because of how GREAT Capaldi looked in that high necked collar and tie. Seriously, If I were a girl, I’d be swooning. I still might.

I hope the disguises become a part of this Doctor’s shtick. It was a great bit of business, and one of the things we really saw in this story was how well Capaldi does different modes of dress.

As for the story, first episodes are frequently a bit weak. I really like “Castrovalva” and “Robot”. I want to like “Spearhead from Space” and “Time and the Rani”. At least I can sit through  those. “The Twin Dilemma”, “The Christmas Invasion” and the movie are just plain hard to watch. This story was surprisingly average, surprising considering it has a Dionasuar bursting into flames and steampunk robots…then again, steampunk doesn’t really do anything for me.  The tenuious connection to the Madam De Pompadour felt a little to shoehorned in and would perhaps have been better served later in the season. I like the intrigue they are setting up, calling back to the Bells of St. John and connecting it to someone keeping Clara and the Doctor together.

The constant references to Madame Vastra and Jenny being married annoy me. It was like someone was determined to clobber you over the head with it. RTD was always very in-your-face with homosexuality, and 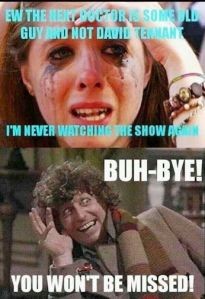 always felt like he was driving an agenda. Moffet has generally been far more subtle. The subtext between Vastra and Jenny has always been there. You could revel in it if you so choose (much like my friend Don does) or you could just ignore it (much like I always did). Repeating “We’re MARRIED” four or five times over the course of one episode was unnecessary and if you consider it, a little insulting. Respect your audience and trust them to pick up on the subtext. There’s no need to be this dramatic.

The final thing that rather bothered me was Matt Smith’s appearance. I suppose I kind of get it; Moffat is appealing to the teeny boppers and fangirls who latched on to the show when they started casting pretty boys in the role of t he doctor instead of middle aged men with character in their faces.  I personally have been waiting for them to go older wit the Doctor again for  the longest time and if you truly GET the show, it’s a non-issue old or young.  It was an interesting way of speaking directly to that demographic. It also feels a little desperate. Like someone wasn’t confidant in the show continuing even as it moves closer to it’s roots.  I don’t like that, it sends the wrong message.

It’s a little more than that though as well. Dramatically, it’s….I don’t know…disingenuous? Stephen Moffat, through Matt Smith’s Doctor criticized David Tennants Doctor for being narcissistic and having issues referring to his half regeneration (keeping the face) and in a more meta sense, criticizing the lengthy and dramatic goodbye that Tennant had. But watching Matt Smith call Clara from Trensalore felt much like the 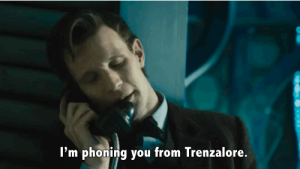 same kind of thing – a lingering goodbye. And extended swan song. It’s the second time we’ve bid him farewell, and it almost feels to me like he’s milking it. Yet at the same time, it’s a shocking scene. My jaw dropped and my heart plunged. The story EARNS that scene.

At the end of the day, I’m obviously going on and on about the trivial, and talking very little about Capaldi himself. Indeed, more than half the pictures in t his article are of other Doctors. It all comes back to my opening salvo; I just don’t know what to think.  I don’t instantly dislike Capaldi the way I did with Matt Smith. I don’t instantly love him the way I did with David Tennant. I’m hesitant, nervous. I’m still waiting to see where this is going to go.

For now, I’m going to hang on, and follow the eyebrows. 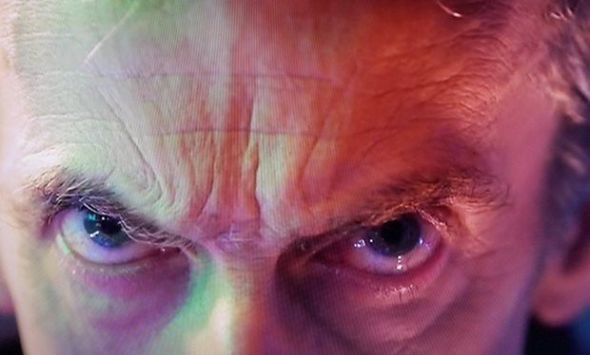