So a couple of days ago, a friend of mine posted on Facebook “If anyone is wondering what to get me for Christmas, Taylor Swift tickets would be a great idea.”

I replied “only if you bring a sniper rifle.” That’s just my sense of humor. If you’ve been following us for any of the last five years, you already know that, and she found it funny.

Quite quickly however, she started getting flooded with instant messages about how terrible that was, how evil and you just can’t say things like that. The messages ranged from upset to fairly hateful. It got so bad that pressure from her sycophantic friends led her to delete the entire thread (I would have been happy to just delete the comment, but I didn’t find out until it was all over), and that I find pretty appalling.

Anyone with any common sense knows that I don’t want anyone to put a bullet in Taylor Swift. Just her microphone. I find her music to be overdressed and derivative. “You belong with Me” which I think may be her best song, is clearly influenced heavily by Saving Jane’s “Girl Next Door”.

Speaking of the “girl next door”, this is perhaps my biggest bone of contention with Swift. I don’t quite understand how she’s managed to sell it to so many people, but this girl next door, this America’s sweetheart persona that she and her producers have so meticulously crafted infuriates me. Swift comes from money. She was born rich and has never know the “girl next door” life. She’s never been homely or ignored. She’s never worked at Bob Evans just so she could pay for her prom dress or driven that beat up chevy to the beach with her friends. I realize an album about rich pretty white girl problems (“out of Pumpkin spice lattes at Starbuck” or “only two guys chasing me instead of three”) probably wouldn’t sell, but at least it would be honest. I could respect that.

One last word to those followers of Taylor Swift that were so appalled I made a joke about her and think that I’m so evil because of it – believe me when I tell you, she’s not nearly concerned about YOUR welfare as you are about hers. There are much better deities far more worthy of your worship. 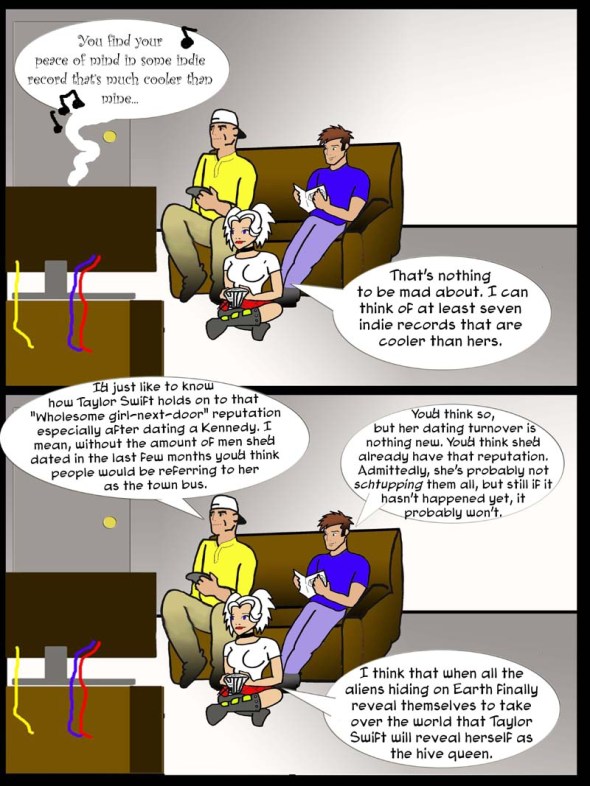