State of the comic

Five years. I’m not sure what to think of that.

From the beginning I stated this series was set to last about five years. maybe four. Around year three I wen on record saying it was definitely going to end in year four. Looking in the buffer i could see the end date.

The end of year four came and went. You’ll notice it wasn’t as big a cliffhanger as usual that year. I honestly thought I was going to be done by then. Still year five was probably going to end around February. Then that got pushed back to June and I was happy it’d be half a year. Then it got pushed to August. Then October.

We are still pretty close to the end.The final strips have been drawn and I know where the story goes (I’ve always know how it ends, but now I can actually see better how we get there). Looking at the buffer, We’ll still be going for a couple months into 2015, and of course the strip will continue to reprint here on the blog for the foreseeable future.

After the series ends, we’ll probably release the novel here, and do illustrations from time to time to go with it. In that way we’ll be around for most if not all of year six, and more than likely there’ll be at least one more novel to come.

This has been one of the most interesting experiences of my life, definitely the longest for story I’ve ever written and probably the longest I’ve ever spent with a set of characters. I’m grateful for all of you who have come along for the ride, and don’t worry, it’s not over yet. 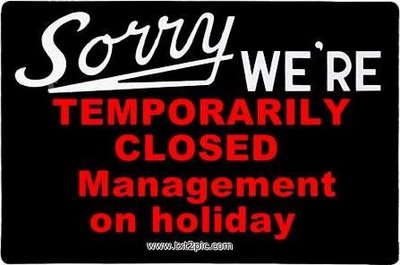 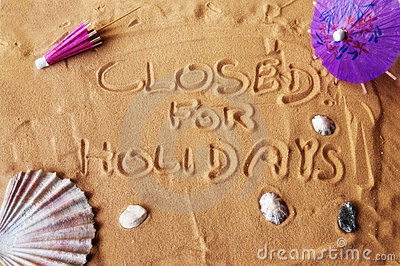 Just a quick note,  a great time at the party, seeing friends and it was  great time to raise money for the Cleveland food bank! Here’s a few shots of the gallery, including my two covers! 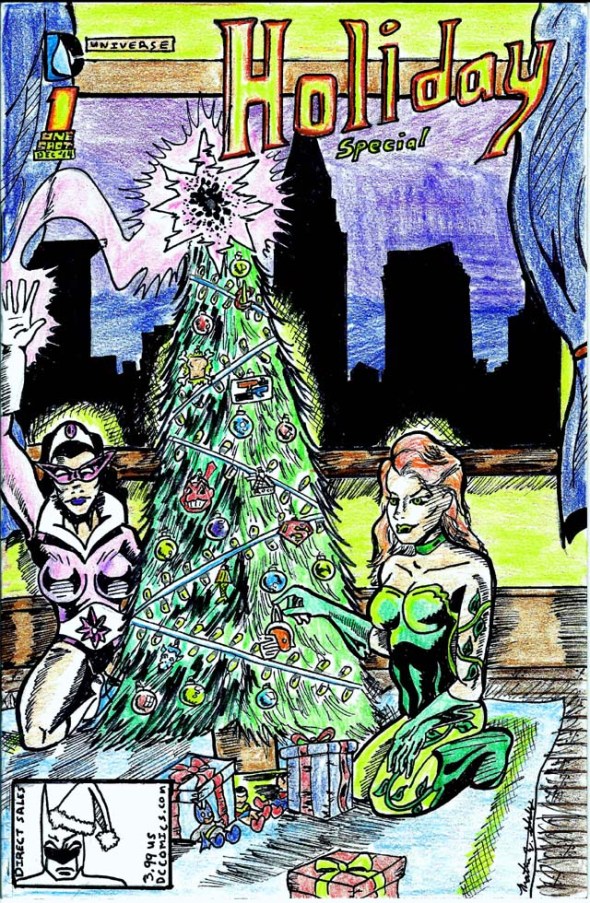 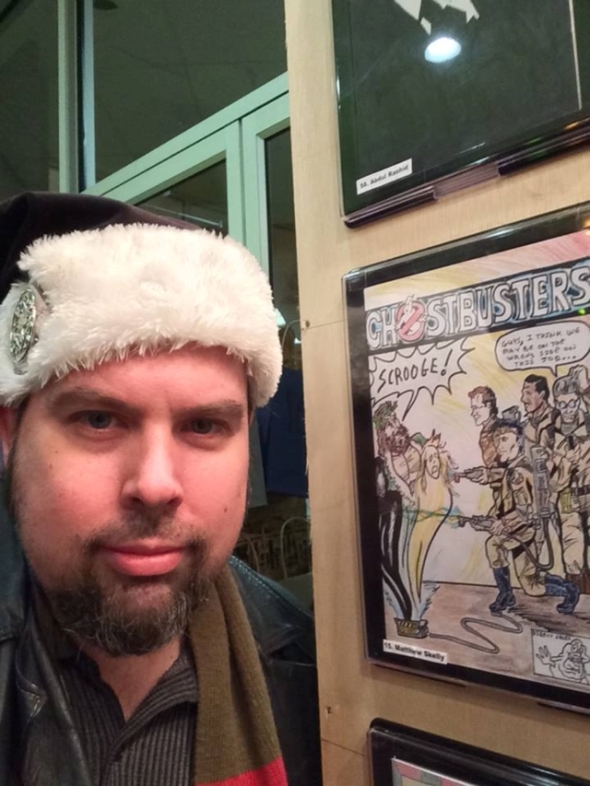 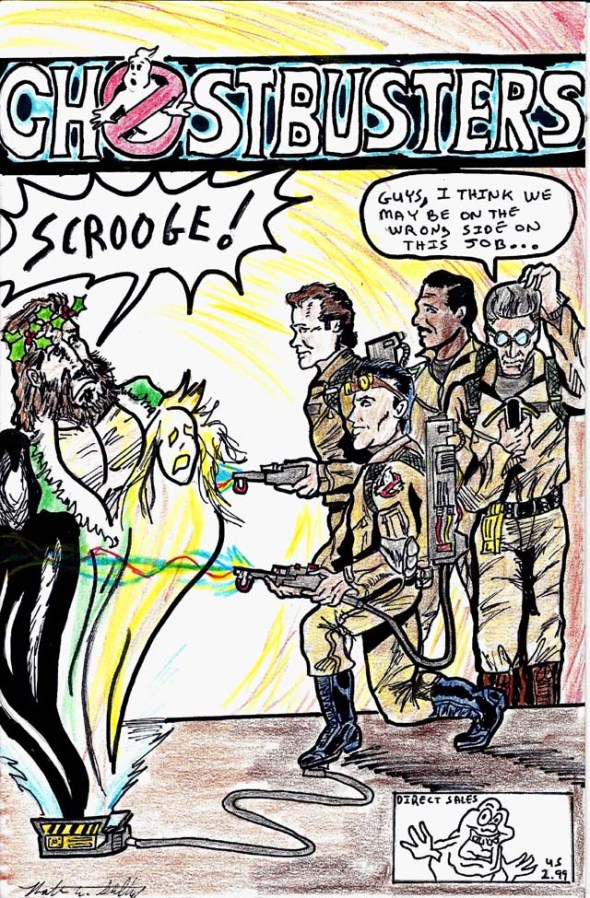 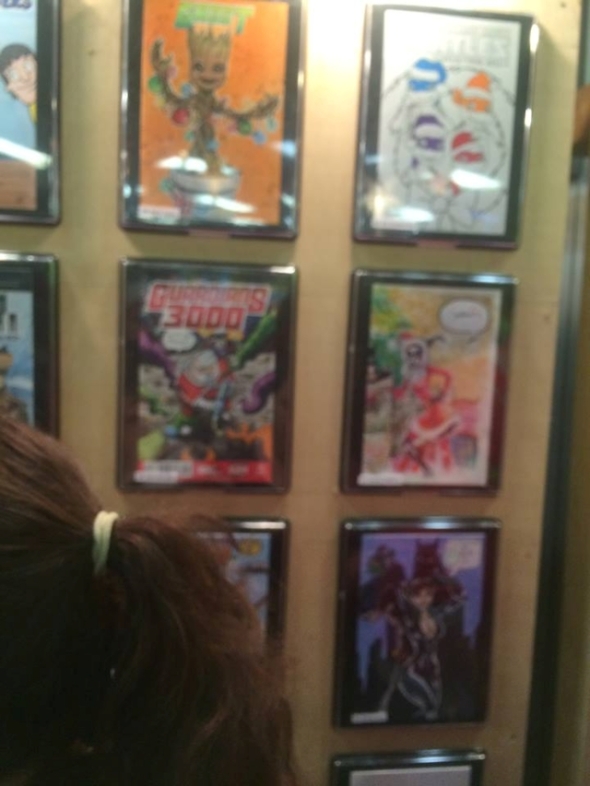 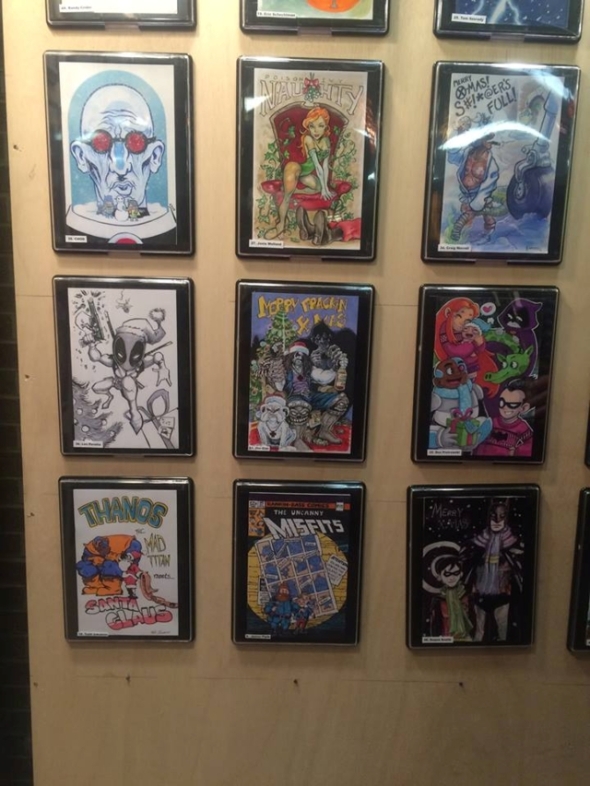 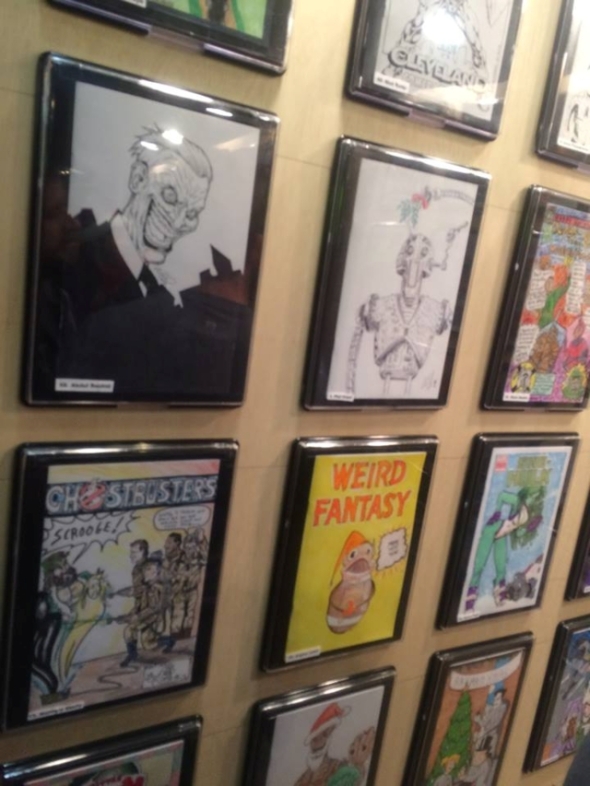 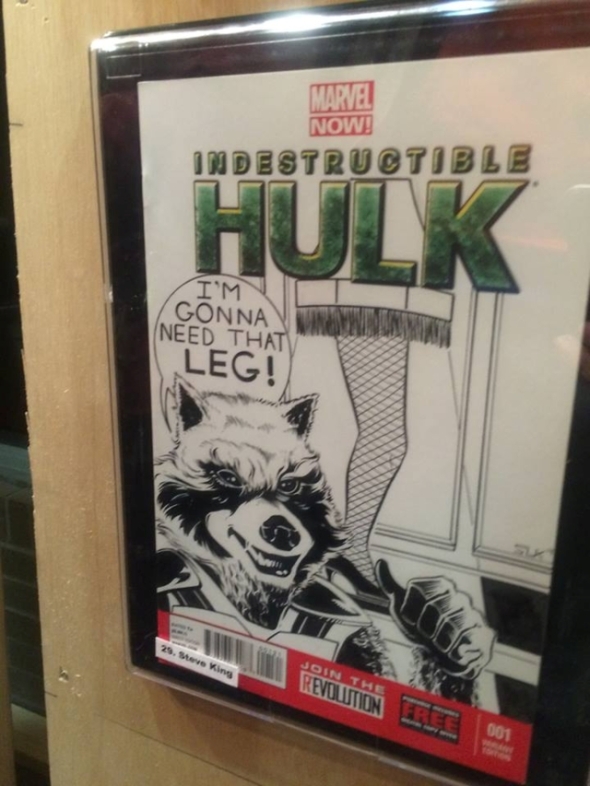 And that may be the best cover of them all up there….  a great night at Carol and John’s all around! 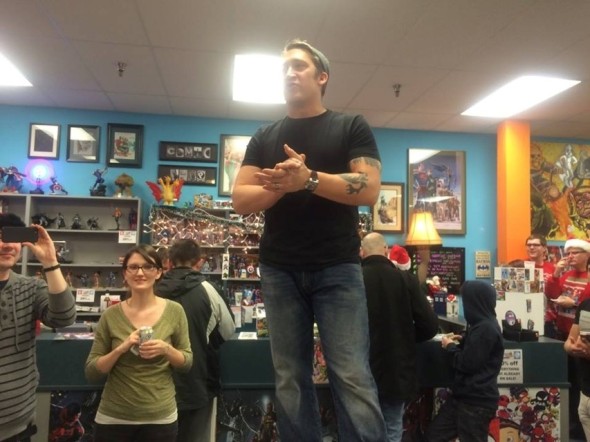 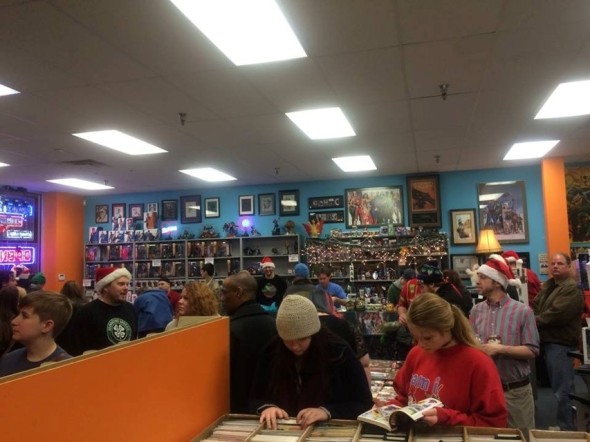 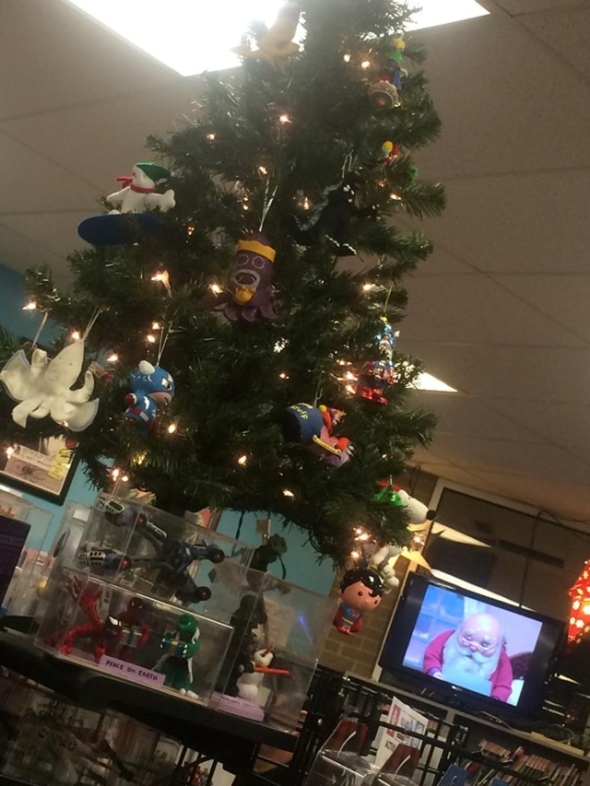 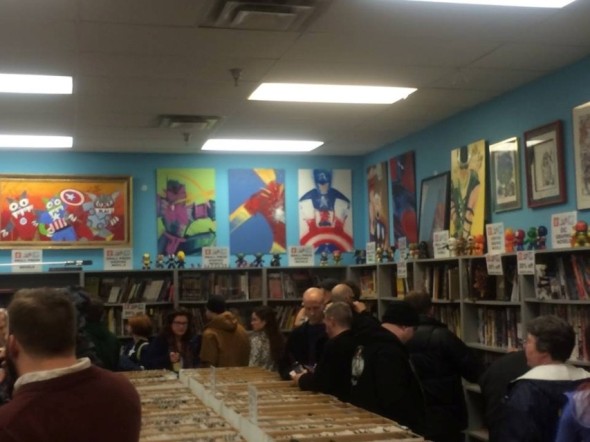 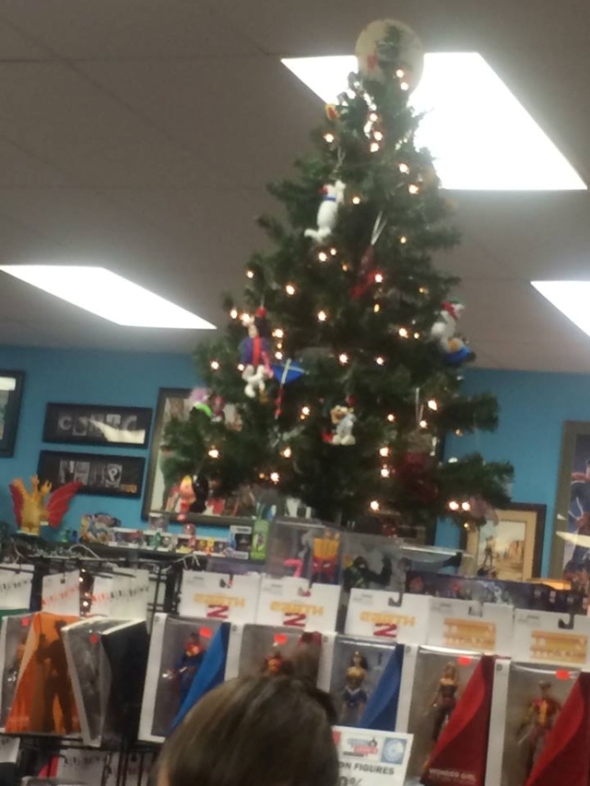 I’ll be heading out around 9pm to Carol and John’s comic shop for the annual Christmas party. If you want to pop in earlier that day though, starting right at 10am the following sales take place:

50% off ALL Back Issues
20% off ALL Graphic Novels
20% off ALL Action Figures, T-Shirts and Statues
10% off EVERYTHING else in the shop

but more importantly, All day long you will be able to participate in our art show / food drive for the Cleveland Food Bank (In conjunction with Pop The Comic Culture Club)

Bring in a can of food and get a ticket. (or) Donate a dollar and get a ticket. (They also do six tickets for $5) Tickets can be used in two ways. To buy comics out of the dollar bins or to be placed into a basket raffle to win custom covers by local artists including me. I’ve done up two covers and I would like nothing better than for one of my readers to walk away with one of them!

After the party, my daughter and I will be hopping over to White Castle at 3255 W. 117th St for our final trip there. They are closing down all the ones in Cleveland and while it’s not a particular favortie, i’ll still kind of missit (I always went when I had coupons).

Finally, we’ll be heading out to the Capitol Theatre for the midnight showing of Batman Returns, a great Christmas movie in it’s own right!

If you catch me at any of these stops, tap me on the shoulder and say hi! I hope to see as many of my Cleveland area readers there as I can!

And don’t forget to join us on Monday for the last new Violent Blue of the year!

An Angel Lite commission. From “The Ballad”

Karen Madrid – Bassina the mermaid, Bandito’s girlfriend, Grew up in a well off family till one day her family got in a boating asked and she was shipwreck on island where she raised by merpeople 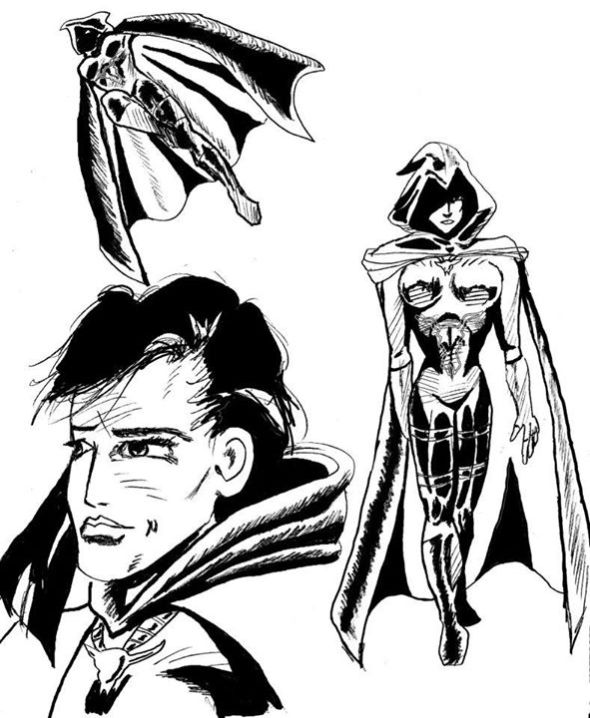 We’re ending the series with out Christmas episode! This was actually done towards the beginning of production and it was funny, people kept yelling at us as they drove by!

I kind of did this one on a whim. When I was in High School, I was ALL ABOUT Seinfeld. I didn’t think much about it after I put it in the mail, not entirely expecting to get this one back. I actually forgot this was in the last set of envelopes I sent out until I opened it up and saw the picture! How fun to surprise myself like that! 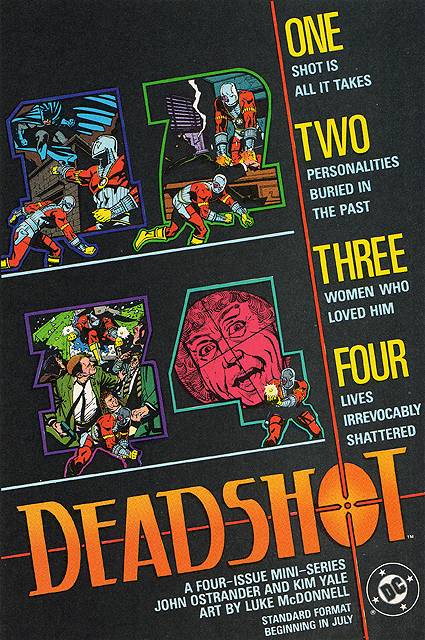 I feel like I had to throw a full size house ad here, because you really have to be able to read this. This ad had me hooked from the word go.

I’m not sure if it lives up to that ad though- not that it isn’t good, or even as good as  the ad….it’s just different. But let’s back up a moment, because some of you are too young to remember a time when Deadshot wasn’t popular.

Seriously, back before Suicide Squad, he wasn’t even a B-lister. He was nothing. Showed up in Batman here and there, but no one cared. John Ostrander took this character and gave him depth. Personality. In fact he noticed that over 1988 that he had TOO much he wanted to do with him, and he was afraid Deadshot may end up dominating the title unfairly so he came up with a plan- let’s do a mini-series.

I knew Deadshot from reading Who’s Who obsessively and the 13 year old me was really into min-series so this was perfect. I actually hadn’t been reading Suicide Squad at the time – this series got me into it.

It stats off simple enough. Deadshot’s son is kidnapped and the ransom is to finish a job from years ago. Instead he goes after his son. Standard superhero fare right?

Except…the kidnapper is his mother. The job is to murder his father, and the gang? this is a special gang. You pay extra fro them because one of the crew is a mentally handicapped child molester who tends to kill the kids he diddles.

How in GOD’s NAME WAS THIS NOT A MATURE READER’S title??? Seriously. It has the comics code seal on it. GENERAL AUDIENCES. Let me tell you, there was no way I should have been reading this at that age. Especially since….how do I put this?

Everything goes horribly wrong. EVERYTHING. As bad as you can imagine it, that’s what happens. By the end everyone is dead….well, not everyone, his mother is paralyzed, good as dead. This is not cheerful reading. There is NO happy ending, but this is a GOOD book and to this day I credit it with single-handedly making Deadshot the star he is in the DCU today. 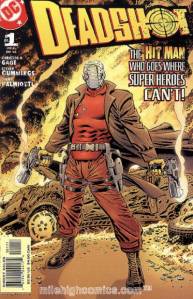 Twenty years later there was a second mini-series. It’s a follow-up bot to this series (kind of) and to Kieth Giffen’s Suicide Squad (kind of). I almost wonder if this was a story Giffen was going to tell in his suicide squad before it got the axe. It’s not as raw or as gritty though. It follows fare more traditional comic lines, a safer story where the status qoe is restored at the end. A nice follow up and easy to get, but make no mistake, it’s just an epilogue to tell you what happened afterwards. The main event is the 88 series.

I occasionally still see these in dump bins, but even if you don’t I seriously recommend you go out of your way to find this. It’s one of DC’s great triumphs of the 80’s.

Sabrina the Teenage witch is one of the shows I watch with my daughters. It’s girly but fun. It’s safe without being boring.

About eight months ago, I came downstairs to discover Maddie writing Sabrina a fan letter. Lydia did one too and we sent them off. Ms. Hart is known to sign through the mail so I was fairly hopeful.

As time passed I had mostly given up on hearing back. Perhaps she was too busy with Melissa and Joey, as well as being a new mother again, but Saturday I found a large yellow envelope in the mailbox.

It was fuller than I expected.

She not only signed some pictures for the girls, she also sent each of them a short hand written note! The girls were excited and frankly I was too. Very worth the wait! 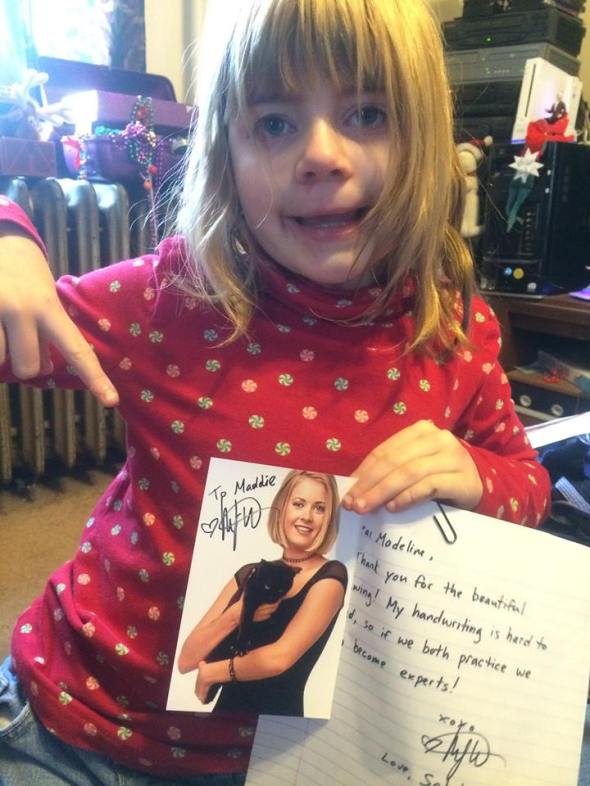 The project was to create an image of somethign from a list using found materiakls from outside. Lydia choose a butterfly and then weh notu to find things to make it out of. She selected these items and this is what she came up with.

I’m stunned at how beautiful the concept is. 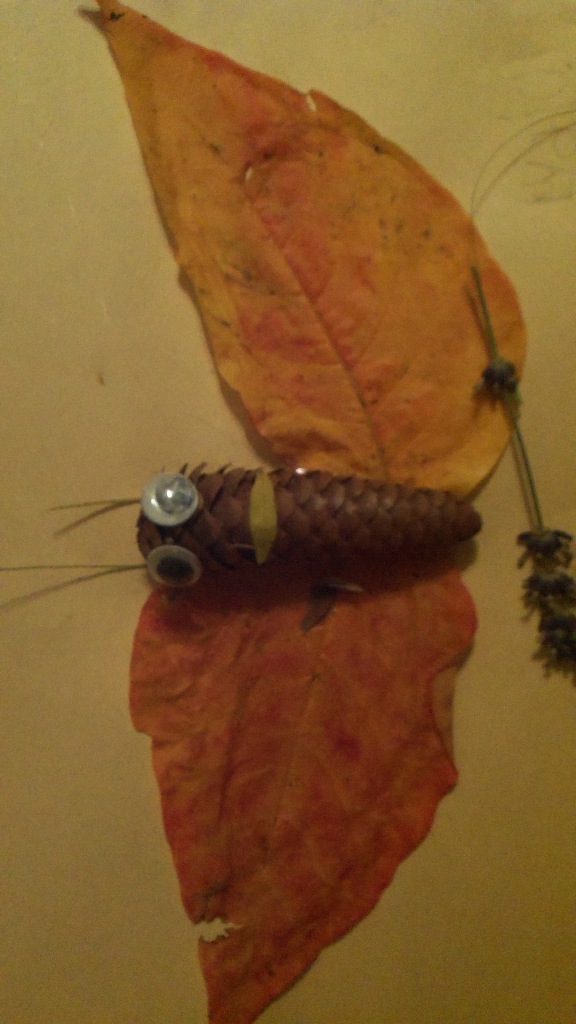 And here we  thought we were finished.

The first problem is I found my upper arms weren’t really working well and wanted to redesign them so they wouldn’t rub against the chestplate as much but would give me greater range of movement. I came up with these. 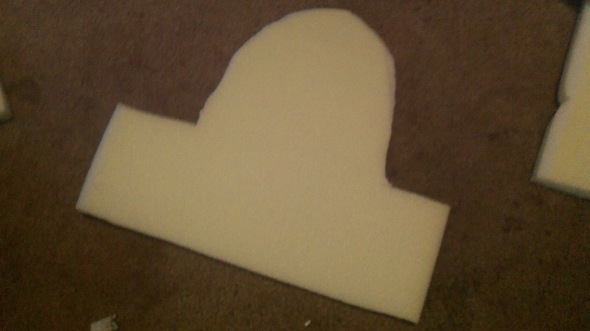 A little scoring on the back to help it bend better

Added a hole and some layering to give more of a circular hinge look to it. Once velcroed to my shoulder it fits nicely under my shoulder pad and actually fits far better. Looks better than the prior pieces as well!

The thing is I really Really wanted a helmet for this costume.The probelm with the helmet is the mask could make or break this costume…it’s already straddling the fence a little hard and I really would have preferred a straight movie helm…and that’s something I couldn’t adequately create. I had an idea though. Let’s try it with the visor up…that way, it’s still my face, I have full visibility and no one is really looking too hard at the faceplate to see if it’s movie accurate or not. 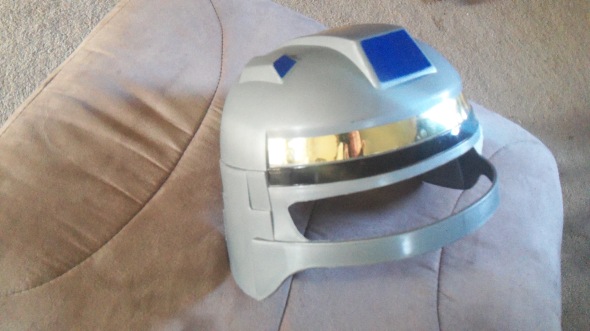 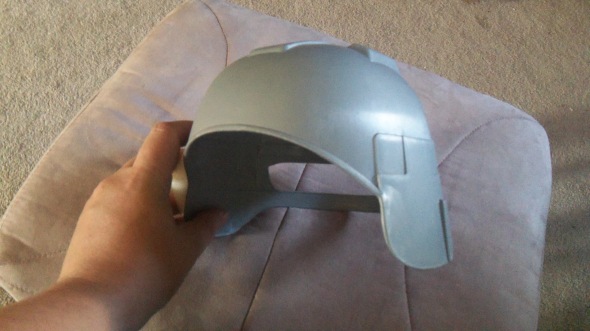 I started with an old helmet from the dollar store. it’s too small for me, but I always had it in mind to build it up a bit. The first thing I buit was the chin area.

From the front it actually looks a little like the helmet’s In the movie before the CG is added. Going to put on some round “Ears” to attach the chin to.

Some foam around the back. 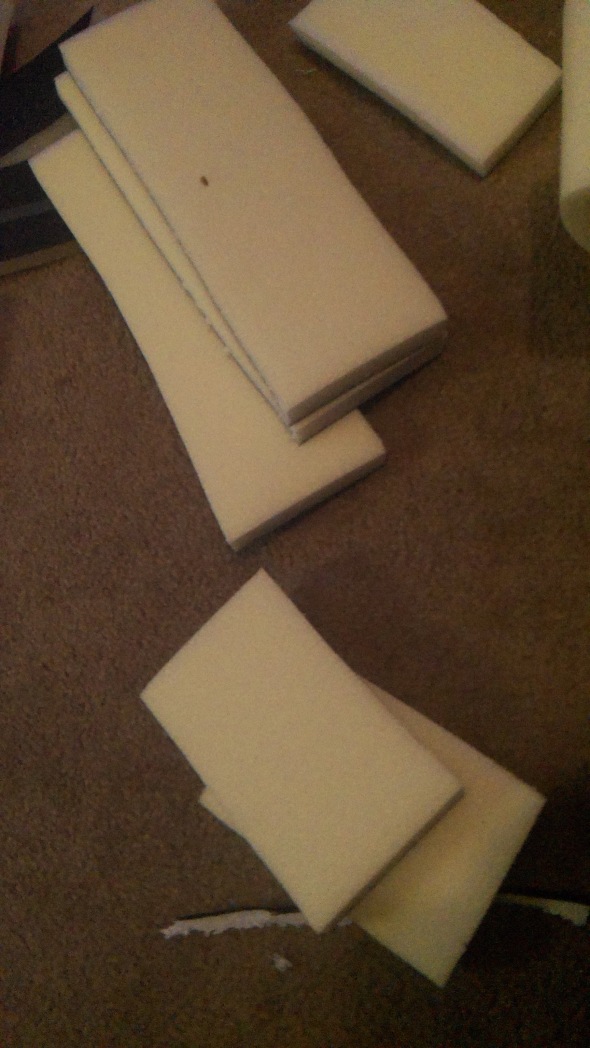 I like the ridged look, it gives texture. Some bling too and a faceplate on the top made out of some of the kid’s construction paper. I tried this out for the first time at last years Zombie Walk in Amherst. 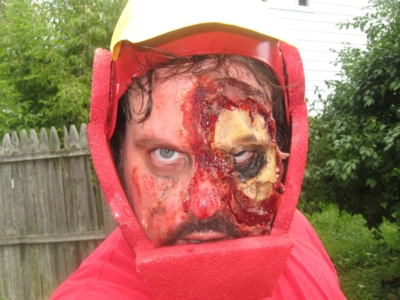 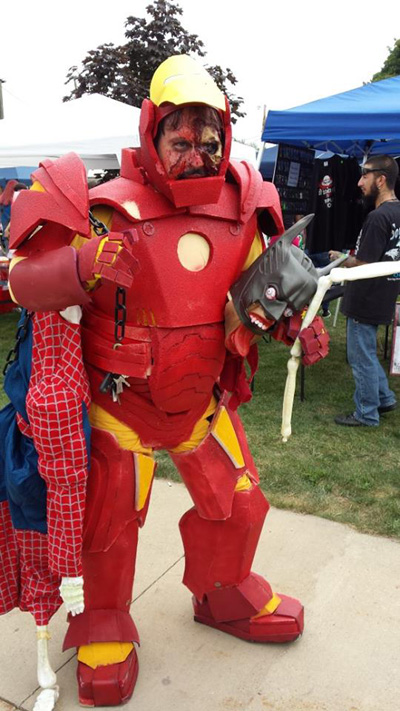 This worked fairly well, but I still wanted something I could wear this with complete anonymity. I found this mask at the halloween store for five dollars and it fit better and more snug than any of the movie accurate halloween masks I saw, I mounted this on to the existing helm becoming the final result. It doesn’t open or close. That’s a drag, but one I can live with!