After a week of nearly nothing but repeats, last week’s Walking Dead really kicked off some amazing TV in a  shockingly brutal way.Seriously, the death of Noah was shocking and the gore level rivialed any of the Romero films that started the genre. Walking Dead has really kept us guessing lately, even people like me who are familiar with the source  materials,so  I anticipated last night’s episode with some small amount of dread.

I like that we really focused on the situation, front loaded with a lot of exposition. It’s important to remember, especially in a series like this, that words and interpersonal relationships are just as dramatic as killing zombies and nobel self sacrifices, not that we don’t take a uber-creepy turn towards the end with the tied up girl and random zombie parts…mild gore, but the context is what really makes  this creepy. That, and what it foreshadows.

But seriously, DOES IT NEVER OCCUR TO ANYONE HERE TO CONSERVE AMMO???  Seriously, where does everyone keep getting bullets and cigarettes? I’d think those would be the first things to go.

Oh and Sasha? Eat a snickers. You’re not you when you’re hungry.

We knew the fight between Rick and the doctor was coming. We did, but I just remember it being more…noble in the 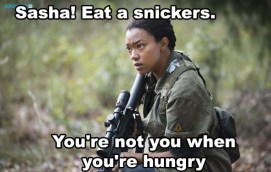 comics.Here, it’s played for a  completely different effect, underlining the friction between Rick’s ground in Alexandria. I really wish it had been more heroic, because Ricks rantings seemed almost insane. If anything though, it does make me very eager for the season finale. Interesting that on the Talking Dead, Chris Hardwick clled  it one  of the most intese episodes of the season.  he’s right, andagain, I feel compelled to point out it was with so little gore or zombies, especially compared to last week.

By the way, that commercial for Mission impossible? I’m sold. I haven’t liked that series sinceMI2, but man, this new one looks good!

ANOTHER rerun for Gotham…I’m getting a little frustrated with this. I miss the days when 22 episode seasons ran mostly unbroken, with only  a preempt and perhaps one rerun to catch up,but otherwise straight through .these two  and three week breaks, sometimes a month, they kill the momentum.

On the other hand, absence makes the heart grow fonder, we’ve  been waiting for new Flash and the latest episode went absolutely batcrap crazy. Sure we’ve known who the Reverse Flash was from almost day one, but to see Cisco dead and Iris finding out the secret…

except it’s a huge mulligan. Time travel at the end blows my mind sure, but it also  means, the whole thing is just going to get reset to status quo this week doesn’t it? I mean it’s kind of like that Family Guy episode where Stewie simulates killing Lois  and the conversation at the end…

Brian: Yes, but, theoretically, if someone watched the events of that simulation from start to finish, only to find out that none of it really happened, I mean you don’t think, that would, j– be just like a giant middle finger to them?
Stewie: Well, hopefully, they would have enjoyed the ride.
Brian: I don’t know, man. I think you’d piss a lot of people off that way.

Oh my God, how good was iZombie?

I guess I shouldn’t be surprised, I did pick up the first four issues or so of the comic back in 2012 or so and really enjoyed it,

but drifted away for some reason. Now  full disclosure, the TV storyline is NOTHING like the comic, at least the pilot isn’t. The circumstances, the situation is very different, but what they get right, what they get VERY right, is the character of  Gwen and the way they display her powers.

I  may actually like this better. Working at the morgue and teaming up with a detective works  a bit better for TV than digging graves and facing a huge cosmic threat, and who knows we still may  get to the comic story about Cthulhu’s kid brother later on as the season progresses. Whatever, I’m really loving this, and it’s actually another show my wife can watch with me (the fact that she watched two zombie shows with me in the same week is nothing short of shocking to me)

And they SyFy decided to show Max Payne insted of Wizard Wars. Syfy, you suck so very much.