I attended the Cedar Lee’s “12 hours of Terrible” marathon this weekend, a great bit of fun from the same people who bring us “12 Hours of Terror” every October. It was a little sparse, about thirty people in the theatre with me, but most of us lasted from 6pm on Saturday night until 6AM Sunday morning.

What I was really excited about was the fact that four of these films I had never seen at all. Of the remaining three, Masters of the Universe was the only on I’d seen on the big screen before, and that was back when it was released in 1987. So a few reactions….

I had no idea Georgio Moroder provided the soundtrack for this, and I really like the music. It’s shot and lit perfectly, obviously done by someone who really understands how to film Stallone. It’s a very 80’s film, with great action and good pacing. It actually passes the watch test.

The big problem is that it’s the worst possible subject matter. Seriously, arm wrestling and trucking….and you’re going to make a Stallone movie out of that (Big credit by the way to creating suspense during the arm wrestling tournament)? The other thing is….guys, this is a Lifetime Television script. It really is. It’s like every other lifetime film where the music is used to create the emoptional tone and moments, while the hero is this soft non-threatning man mourning the loss of his dead wife. The genres don’t work together. Sorry.

This is the kind of film that would work really well on evening television while you’re doing soemthing else. I don’t hate it actually, but it’s really a bad idea.

I’m slow. I know, but I had no idea this was a ninja movie. I’ve only seen kind of blurry shots of the poster and even then, the ninja is the least obvious part of that collage.

The preformers here give “Fateful Findings” a run for it’s money as worst actors ever. It’s really bad stuff. We have a rock band (leaning towards the disco variety) that sings about Tae Kwan Do. They’ve gotten into trouble with a group of Flordia ninjas led by the brother of the band’s newest member (the girlfriend of the guy in the poster). It was never going to be art, but this premise couls still have worked if they’d had actors and a director capable ofpulling it off. I can;t decide it it’s to earnest or not campy enough. I really just don’t know.

I want a Dragon Song T-Shirt.

All that ever really needs to be written about this I think already has been. It’s really not the worst film ever made (that’s a lable that’s usefull for marketing purposes and little else). Heck, it’s not even the worst film in this marathon.

Perhaps multiple viewings have diluted the offense. I know Bela isn’t going to match his stand in and I expect trees and graves to wobble and strings to show on the saucers. It does make a big difference seeing it in a theater too, the changes in film stock and bad effects are far more obvious, but still I like it, and any chance to see Lugosi on screen is a good one.

I really don’t understand why this is considered a bad film. I genuinely like this, and always have. It was a trip to get to see it in 3d, just like My bloody Valentine 3d, it was really made for it and the opening and closing sequences in Hell especially are perfect for it.

This time around something occurred to me and I wonder if any of it was intentional. This is really the perfect third entry in the Ghost Rider trilogy.

Stay with me on this.

Cage is playing a post-Ghost Rider Johnny Blaze. He really is, it feels like the “Spirits of Vengance” era Blaze from the 90’s comics. No longer cursed, but still damned. We don’t need Ghost Rider or even a motor cycle, because this closes his story arc perfectly. In fact, it’s possibly the best of the Ghost Rider films. Pity it isn’t really one of them.

I seriously have no idea what I just watched.

Looking at this poster I was kind of expecting a comedy, but man, this film is serious as a heart attack. THe premise is basically a 21-year-old man wit hteh mentality of a baby, dressed like one, kept in a crib, fed bottles by his mother who may or may not be keeping him like that and stunting his development.

It feels like the sort of thing I’d see at Cinema Wasteland. I can’t say I liekd it, but I’m glad I saw it, and never expect to again. It might work better for me as more of a horror story, or as I mentioned, a comedy. To play it straight like this comes off more disturbing than anything else.

I think I would probably be disappointed in this film if I’d gone to the theatre and paid 10.50 to see it. As part of a marathon

like this was probably the perfect way to watch it.

I think people may be a little to hard on this movie, the ones I was in the theatre with certainly were. There’s a level of hate aimed at it simply because its a M. Night film and not on it’s own merits or flaws. It’s not Mark Whalbergs finest moment, but it’s certainly not his worst performance either. In fact the least likable character in this movie is Zooey Daschenel who I just want to bash over the head and be done with here. 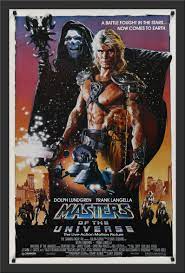 7. Masters of the Universe.

I’ve watched it dozens of times over the years on VHS and DVD, but haven’t seen this on the big screen since I was a kid. The thing about seeing this in the theatre now is how many great (and some not-so-great) details I miss. The skull in Evil Lynn’s jeweled headpiece, the spotted flesh on Gwildor that smooths out in lower resolutions, the dragon seal on the doors inside Grayskull that matches the seal on He-Man’s Harness. No new or special insight here, just a great visit with old friends on a larger screen that I’m used to and all the better.

I’m hoping this happens again. The film selection made for a really great night, to say nothing of the trailers and oddities played in between. I think I’d prefer it at the Capitol, it’s a more comfortable atmosphere but either way, I can’t wait to see what happens next year.