In Defense of Hellraiser Revelations

If Rick Bota and Peter Atkins wer the custodians of Hellraiser in each of their eras, I wonder if that makes Gary Tunicliffe the custodian today.

Really, he’s been around since the early days.  doing makeup as far back as 3. He also worked second unit under Rick Bota who pretty much had complete faith in him – any shot of a hand or a back…anything without the actors face in Deader or Hellworld was Gary. He loves the series and you’ll never find a bigger cheerleader for it.

Revelations was made basically to keep the rights to Hellraiser in house. It is the most slapped together of any of the films. Remember that half a million that they had to spend in Romania  (to stretch the dollar even further) for Deader and Hellworld? Revelations got $350,000 AND had to shoot in L.A. They also had to be done in two weeks. As you can see, no one at dimension was taking this film seriously.

No one but Gary. He wrote the script, created some

spectacular makeup effects (better actually than we’ve seen in over a decade) and worked countless unpaid hours creating new cenobites and new costumes (we haven’t seen new costumes in ten years) and brilliant new designs so this film would have a chance at being more than just a throwaway.  Seriously, look at those. This could be straight out of any of the “respectable” Hellraiser films. All of this and the truth is, they weren’t even sure it would ever be released. It just had to be made to keep the rights.

Besides all of this (as if this weren’t all enough), it immediately had two strikes against it.

First, Dough Bradley wasn’t invited back to be Pinhead. This is a shame, but 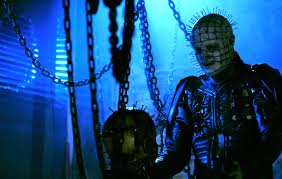 understandable. Doug is getting older and that collar of his gets bigger with every sequel. But also, there’s no money. He’s not going to play the character just for the love of the game, and dimension wasn’t going to shell out his fee this time. Shortsighted on their part, but then again, on the corporate level, this entire project was.

Second, Clive Barker came out and trashed the movie before it ever hit the shelves. Now THIS pisses me off. In my previous articles, you’ll notice that Barker’s name NEVER comes up as a custodian of Hellraiser. I acknowledge that he created something remarkable in the Hellbound heart, and something just as remarkable in the first Hellraiser movie., But that’s where his involvement stops. He created the premise, but really, Peter Atkins created the mythology when he wrote the second third and fourth films. Most of what we truly love about Hellraiser comes from Atkins, not Barker and I consider him the true father of Hellraiser.  I don’t know

why Barker was so vocal abut this film. His entire involvement in all of  the sequels has been to sit at an advance screening, turn in notes (which may or may not be considered) and cash a check. I wonder if he wasn’t paid off this time.

I truly believe all of this contributes to this film being judged to harshly, certainly by the wrong measure. The film tries hard. It’s not a found footage file as is occasionally reported, though there are some found footage elements. Gary tries to recreate as many elements from the original as he can. One family destroyed by what’s in the box. We get the skinned body coming out of the mattress, we get the darkened torture room again

(something they tried to do in Hellseeker by the way, and failed – Bota remarks about how the room disappointed him. This one is a hundred times better), we get candles surrounding the supplicant trying to open the box. We have complicated adulterous relationships and forbidden sex. We have a puzzle guardian. All of the elements are there. The big problem is I’m sure this is a first draft, with no time or money for revisions. Two weeks means no time for rehearsals, not time even while you’re acting to find the characters…and it’s a shame because I can see what this could

have been. What it should have been if they’d been given even the meager resources they had on Deader and Hellworld. Over on the Hellbound web, one person remarked “If this were a fan film, I’d be raving about it.” This is a good point, because I know fan films with bigger budgets or at least, more resources and most have far more time.

It’s a shame my biggest defenses are “They ment well” and “there’s worse out there” but that’s really at the heart of it. This is better than any film the Asylum puts out any day of  the week. It’s better than the majority of stuff on Sci-Fi, and it has the distinctive flavor of Hellraiser to it.