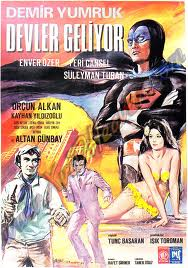 This is actually another Turkish Superman film, though it bears less resemblance to him. if anything, this Suprerman is more like Batman, very depowered.

the flamboyant, wheelchair-bound criminal mastermind transvestite Fu Manchu is hunting a hidden cache of treasure and uranium. It is this that will enable him, somehow, to rule the world. When he kills the one archaeologist with a lead on the loot, the murdered man’s son joins forces with macho policeman Enver to get revenge.  Enver fakes his death to trick the villains and dons the suit to defeat the bad guys.

Honestly this one is even more incomprehensible that the other Turkish Superman based on the Donner film, but good news! I frequently see this one bundled in bootleg DVDs with that movie so it’s not hard to find! Watch it while your cleaning or reading a book.