I really wanted like Shredder Orpheus, man I really wanted to like this. I first encountered this film while watching a compilation of film previews. The trailer and indeed the poster look like it’s going to be an interesting 90s teen film, like hackers or Pump up the volume. That with a near future dystopia, much like
Max Headroom and that’s what I was expecting. Skater town, set in the future, more than anything. I expected the whole story Orpheus thing to be kind of secondary, a mere framework .

What I got was something very different. This is very much a music video kind of film. The skating almost seems tagged on…if I didn’t know better I’d say the script went to a couple revisions and at some point towards the end somebody said “You know what? My kids say this skateboard thing at school is really popular! why don’t we slip skating into this movie?”.  It really is just slapped in there. You could pull out all the skateboard shots and we really wouldn’t lose anything. It’s all second unit stuff and compilations and inserts.

special skateboard to enter the building at the very end, but even those sequences are very standalone.

Then there’s the random Basketball bits…basketball doesn’t feature too heavily in it but also feels slipped in to make a marketable product.

Let’s see what IMDB has to say :Skateboarder named Orpheus and friends go to Hell to stop television signals that are brainwashing America.

Hmmm. That’s not really helpful at all is it?

The Orpheus story here is not subtle. It’s blunt and flat out told and doesn’t translate well into this context. It’s just so heavy-handed and so clumsily crafted that it makes it unenjoyable. 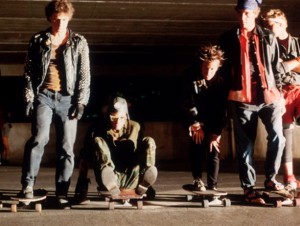 The other big flaw here is the production. This looks like it was shot on tape and then edited between two VCRs. It’s just really bad. I don’t mind production quality sometimes – it works really well a lot of horror films, but this is not a horror film, this is sci-fi. This is a prestige piece… sci-fi derivative based on mythology with a conscience and some sort of sci-fi message… and sadly the poor production values really distracts from all of it dragging you down to a sad level.

Like I said earlier, that this is more a music film, more of a rock opera and we get several performances from Orpheus.
I’m a little disappointed he doesn’t play guitar. I tend to think that a good wailing guitar solo would have lent more credibility to the production than what we actually get –  some weird harp electric thingy. It’s hard to describe. It’s kind of like he’s holding a picture frame with a white background and it makes special effects distortion and sounds  with soundwaves you can visibly see.

I found this to be a real disappointment, and like I said I really really wanted to like this. Done in May 1990it felt too much like a 70s experimental art film, and that’s just not what I wanted.

perhaps I would like this better if I rewatchd it and after a while  I think this will be due for that,where I know what I’m getting into…

It’s rough to find but if you run into it at the salvation army or an old video tapes store it may be worth picking up, but beware. This is not a great film it’s really only for the bravest souls who love the trashiest of films.

This entry was posted on February 11, 2016 by mathias42. It was filed under Forgotten Film Vault, movies, Uncategorized and was tagged with Shredder Orpheus.