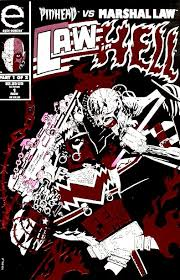 It’s ben a Hellraiser kind of year and I couldn’t resist sneaking one more reference in. I may be streatching the definition of “Best comics you never read” though….

It’s more weird. The Hellraiser comics were popular enough, with stunning cover art. A lot of people flocked to the awful Pinhead limited series, but this one kind of slipped under the radar.

Hellraiser is a niche audience. So is Marshall Law. Putting them both together gets you an even more rarified audience, no a wider one, so it’s no wonder this kind of came and went without notice.

I get the impression that there is far more Marshall Law influence here than Hellraiser, though it has some interesting ideas, it’s mnostly hack and slash drenched in satire and heavy handed social commentary.

It’s worth picking up out of a dollar bin for the sight gags and simply as a curiosity, but I wouldn’t go out of my way to seek it out.