Akron is always a big cosplay event and everyone brings thier “A” game.

Akron’s costume contest though has always been a challenge. Because it’s so big, it’s hard to fit in a room, and this year Rubber City Cosplay had thier hands full trying to figure it out.

Over the past year in particular, it’s been a real pleasure watching Rubber City Cosplay develop as a contest facilitator. They’ve gotten more comfortable with the role and developed genuinely good strategies for keeping things going efficiently.  However, Akron is the big show. With literally hundreds of contestants and a surprisingly small space, this is the most challenging contest they handle. There was confusion on where to go. The hall downstairs had been partitioned off into two smaller rooms. You began in the first room with a camera and a green screen, then made your way out the door onto the main stage… so before going out and getting announced, there was this

other group with a camera, taking pictures before the contest – their original plan had been to interview each contestant as well, something they weren’t allowed to do as it would slow things down too much. I assumed that they were perhaps broadcasting the images over to the main screen, but now I’m not even sure they were really a contest component. All of this delayed the start and slowed the lineup down.

That’s not necessarily a bad thing. I was exhausted already and my boots were killing me – I was grateful for the chance to sit down while waiting. gave me a chance to help the guy in front of me get out of his gloves and  get into his helmet- magnetic pieces and velcro and all sorts of wierd stuff! I appreciate that helm and costume all the more for having seen it up close as he got it on. My friend William was down the line keeping Chris Gulley’s Black Panther cape in place.

We were told we couldn’t stay in the room to watch the cosplay contest and this was a kind of a drag. It’s one of the important things to note. the sense of community in the costume contests is

always one of my favorite parts of a con – talking to people about how they made their costumes, what they’ve done before – cosplay is an instant icebreaker for those of us who are introverts. In the good ones you really see everyone cheering for everyone else and that was really present here. In my never-so-humble opinion, partitioning that room was a bad idea.  A large space is needed for this event if it’s going to be the huge component it always has been at Akron. I don’t think we had more room than this back at the Quaker Station hall.

It was great to see so many of these familiar faces though. That Nocturne I saw at Hall of Fame City was back, as well as the Freddy Kruger. Cinderella showed me the work she put into her glass slippers and it wasn’t untill after the con 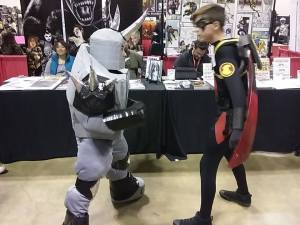 that I realized Secret Squirrel was the same guy who did Domo Batman last year! There was a little Rhino that was COMPLETELY on point and picking fights with everyone ( I was so happy that he placed in the kids contest!) and the absolute best Iron Man I’ve ever seen in a kids costume….in fact it was better than most adult Iron Men! My friend Jim pointed out to me a kid in a Cyrano Jones outfit, complete with Tribbles. Another in a Smaug costume. Fantasy dominated the contest this year and Man-At-Arms ran around trying to get pictures with every barbarian warrior he saw. The Z.E.R.O.S. were there in full effect with Ryan yelling “Man-At-Arms is my hero!” as I headed into the costume contest.

“Got to experience the two extremes of cosplay attitudes today at the Akron ComiCon.

On the negative side, saw a contestant that I won’t single out getting in his car after the contest was over, whining and complaining that “this contest was crap” and “I have over a thousand hours invested in this”, yadda yadda yadda.”

Allow me to interject at this point, that my friend Marc witnessed the same thing by the same person a little later – “the same adult male throw a major tantrum because someone else won a small piece of etched glass instead of him. Obviously, he was the only one worthy and the judges were idiots and the contest was rigged and life isn’t fair and Hilary is evil (not trying to politicize. That was actually part of the tantrum).And this was in the convention center near my table, not in the parking lot, which means this same tantrum was thrown multiple times.”

“Then, there was the plus side. A little girl saw me and became ecstatic. She was a huge Captain America fan (she was too young to know who USAgent is, and Cap wore the uniform before Walker did, so she’s forgiven), and her face just lit up seeing me, and she needed a pic.

It didn’t matter to her that the guy dressed like her hero was nearly three hundred pounds and constantly wiping away the sweat pouring out of a mask with no ventilation. It didn’t matter that I haven’t dyed my belt to match the suspenders better, or that I’m not real happy with the paint job on the shield. It didn’t matter that my version is an amalgamation of different versions of the comic costume along with the MCU Cap costumes, and so isn’t a perfectionist version of either.

All that little girl cared about was her hero kneeling down to take a picture with her, and smiling at her.

The costume and shield may be fake, but that smile was as real as it gets.

I feel sorry for the guy who felt cheated out of a win in a contest of people dressed as imaginary characters, as if winning or losing have anything to do with what is important in cosplay.

I’d much rather be in the company of that little girl, who was just happy to see the character she loved.”

That’s it right there. You know something? I’ve never won or even placed in Akron costume contest. Not once. But that’s not why I do it…the community, the camaraderie and just the time to have fun…it’s worth it all. Just look at all of these people in the photos below and you’ll see it too.

I can’t wait for next year. 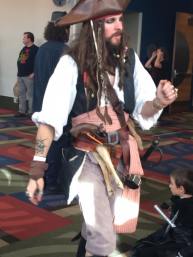 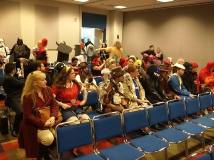 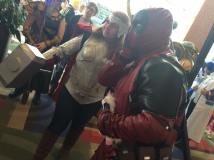 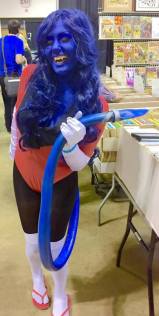 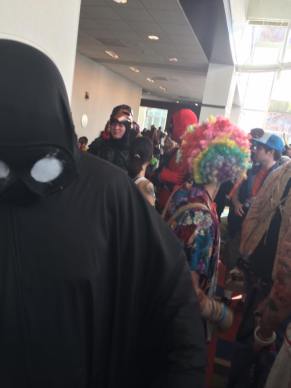 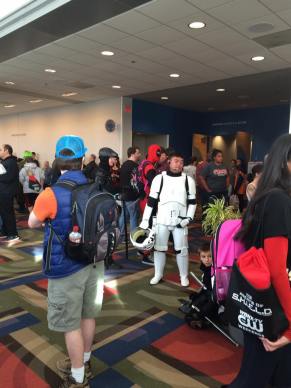 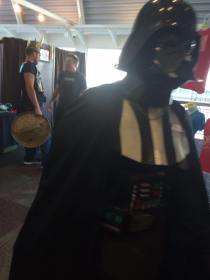 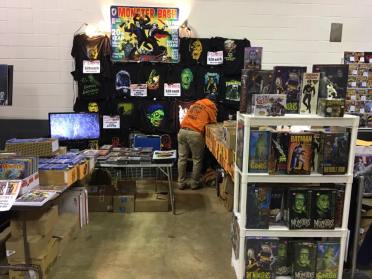 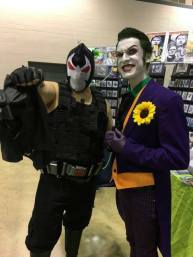 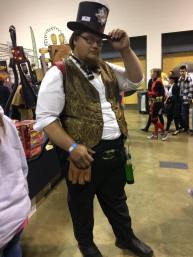 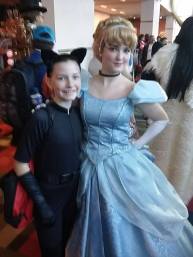 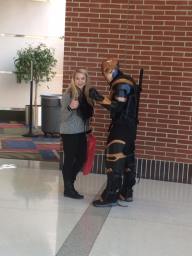 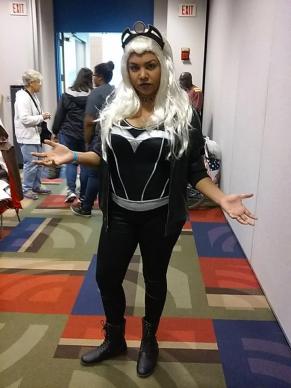 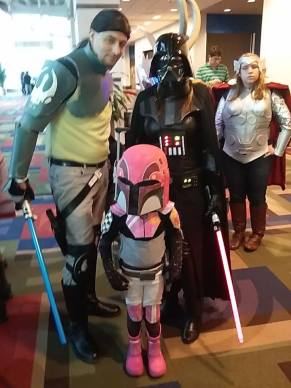 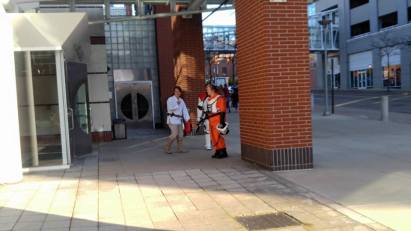 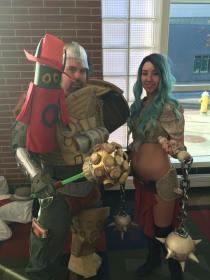 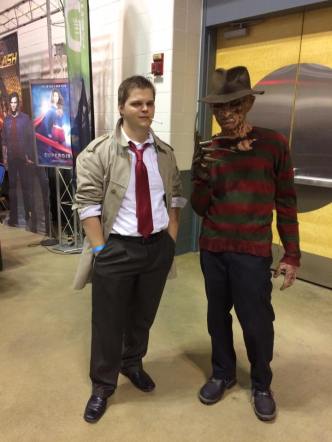 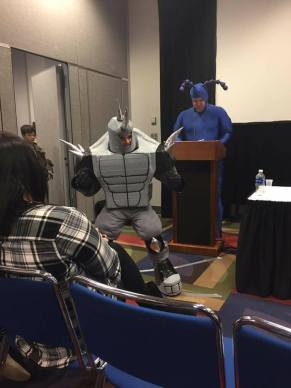 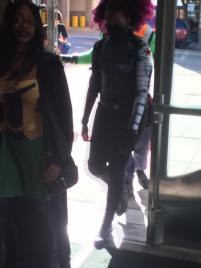 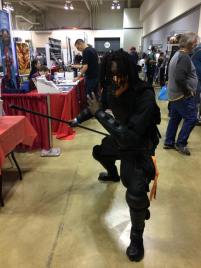 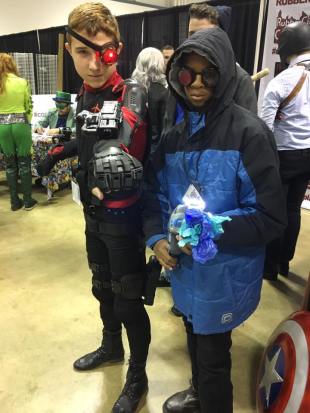