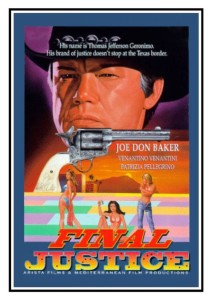 There’s a  great story somewhere in the middle of this mess. I really like the concept of this Texas cop escorting the gangster, getting held over in Malta and then having to basically turn the country on its ear to make things right that. It’s a brilliant conceit considering that Graydon was filming in Malta for financial reasons, building a story around this very concept It just feels brilliant that he uses the setting of the country beautifully, and quite frankly the chase scenes? These are perfect – boat chases instead of car chases… It’s a wonderfully clever way of adjusting to your circumstances, and quite frankly more exciting.

Boy, does Graydon love Joe Don Baker. I’ve never understood Baker, I’ve never quite got how this man became a star. He’s ruthlessly savaged on MST3K on a regular basis, and rightly so. He’s not your typical image of a leading man, and it particularly shows in this film. Indeed, the opening sequences include a moment with Clark himself playing Baker’s superior and reminding him that he looks a little out of shape and reviews are coming up. The costume is a little over the top as well – watching this I almost wonder if Graydon Clark was trying to create a parody of a Texas Lawman, but from hearing him speak and reading his book – I don’t think that’s the case so I really don’t get this garish choice in wardrobe. Maybe it’s the time period, perhaps you could get away with this nonsense little bit more easily in the 80s but I really don’t know. It’s odd to the point of being distracting sometimes.

The film is well paced and still fun, but honestly, you’re probably better off watching the MST3K version of this if you can find it. I’m honestly not sure that it passes the watch test otherwise. Of Clark’s films, it’s certainly not even close to being one of my favourites.