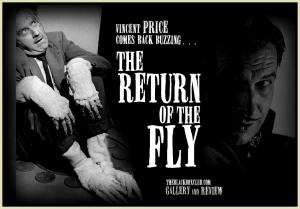 So remember how I mentioned that the Fly wasn’t what I expected? It wasn’t a mad scientist turning himself into a monster and rampaging  through town?

Yeah. That’s THIS movie instead.

Actually, it seems like this movie is the one that has had more influence, visually anyhow, on the genre. In my last column, I also mentioned a childrens book in my local elementary school with a picture of the Fly in it. that picture used to terrify me and kids would pull that volume out and chase me around with that picture. My memory is admittedly fuzzy, but I’m almost certain

that the still was this photograph or one very like it. Almost definitely from the Fly Returns – not from the original.

Given the success of The Fly, I absolutely can’t understand why this sequel was given such a smaller budget – according to IMDB’s estimates, they had about a third of what they made the original for. While there are some sets and props re-used, there’s a great deal here that had to be created from scratch, including a new monster head – one far more horrific than the mask  from the first film. Horrifying but clunky. The actor inside obviously couldn’t see out of it and it shows when he dashes away to escape the folks chasing him. To make matters worse, the large head wobbles visibly.

The suit isn’t the only effect to suffer. Last time, I mentioned expecting the fly with the human head to simply be a rubber creature with a man’s head superimposed on it – safe, slightly transparent, but par for the course. While they opted for something far more

visceral and horrifying in the  original, the superimposed head is exactly what we get here. It’s clearer, but it’s also safer – and perhaps a bit more goofy.

I may be judging the film a bit too harshly though, because standing on it’s own , apart from the criticism of the excellent predecessor, this is a genuinely fun film, with a very standard plot and indulgent thrills. It’s a typical mad scientist story, edged with obsession and betrayal. The fly here (son of the original scientist) is very much a monster, with the animistic side taking over far more quickly than in the previous film. The beast is driven by instinct to avenge its human self, and is far more satisfying as a monster here. The movie isn’t as heavy as it’s predecessor, in fact it’s slightly more direct and camp format as well as the happier ending make it infinitely more re-watchable to me than the original. It’s fun, and a good (if predictable) way to continue the story.

It never hurts to have Vincent Price back as well. He’s the only returning actor, though a lot of the background returns as well. This was filmed on the sets (still standing) from the

original – this didn’t surprise me, as I was watching I found myself remarking on how good a job they did replicating the props like the goggles and telepods. Even the lab looked remarkably similar – it should. It’s the same room, shot from a different angle – about forty five degrees to the right. If you look closely, you can spot the doors (which now lead to different places) and the computers in the same places they were. It’s a brilliant bit of simple slight of hand.

I like this series, and was glad to see the sequel. After all, there’s really not too much more mileage they can get out of this franchise…

This entry was posted on March 28, 2017 by mathias42. It was filed under Argo City Movie Night, Uncategorized and was tagged with Return of the Fly, The Fly, Vincent Price.