Usually when we see a sequel to a remake, it’s a whole new story. It becomes it’s own thing with the license to depart from the franchise source material – so from this I expected the Fly 2 to have very little in common with Return of the Fly ( the sequel to the original Fly film). I was surprised at just how many similarities I found instead.

The Fly 2 is still very much a descendant from Cronenberg‘s Fly. Indeed, despite the fact that we pretty much have an entirely new cast and crew, they manage to match the tone and transgressive levels that the 1986 film presented, making a very strong connection visually.

The son of Jeff Goldblum and Geena Davis’ characters is being raised by the corporation that seized the Telepods after Goldblum’s death – the boy, Martin is raised as a sort of human gunia pig – watched to see what happens to the warped genes he inherited from his father. It’s a good conceit to avoid a simple retread of the previous film’s 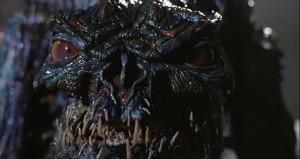 Still, there’s more similarities here than you may expect. Much like in the Fly Returns, the monster makeup is bigger, there’s a definite attempt to be far more gruesome (though it kind of comes off as cartoonish). This monster is definitely more of a killer as well, taking revenge on those who wronged him. It’s an interesting parallel, creating once again, a more straightforward story. The ending mirrors the Fly Returns as well, with us against all odds, finding a cure for the mutation and living happily ever after. Probably.

As good as this is though, I must say, this is another reason to reboot the franchise. I like the look and

feel of the film, but it’s extremely dated. One look and you instantly see you’re still in the 80’s, along with the stereotypical “evil corporation” being the villian in three piece suits. Driopping Princess Vespa from Spaceballs in as the love intrest dosen’t help it any.

Still, I really do enjoy this film and honestly this entire series. Plowing through a franchise like this has been fun.

We should do this again sometime.

This entry was posted on April 3, 2017 by mathias42. It was filed under Argo City Movie Night, Horror Movies, Uncategorized and was tagged with Horror Movies, The Fly, The Fly 2, The Fly II.