This should be awful. 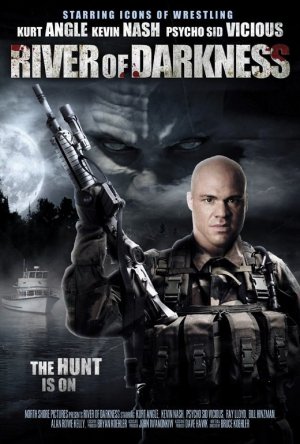 It shouldn’t work, but then again, we don’t watch horror movies for the Oscar worthy performances do we? The wrestlers give a serviceable showing in their roles and are joined by some Romero alumni. I recognized the late Bill Hinzman’s name in the credits ( he was the very first zombie in Night of the Living Dead) and quickly recognized Dawn of the Dead Alumni Joe Shelby and Nick Tallo. We even get a shot of the old crypt and the graveyard from Night of the Living Dead.

I’m surprised at how much  I like this. It’s a nightime movie about a group of wrongfully lynched hicks who return – bearing more of a resemblance to ghosts than zombies. Whatever they are, the monsters have a great look to them and the carnage they wreak is bloody, gory and enormous fun. The film manages to create a spooky atmosphere, very reminsant of the Fog with the monsters reminding me a great deal of the Blind Dead. It’s that kind of movie. The killing and the gore start almost immediately, and it didnt take long before I was totally on board.

River of Darkness was one of the more pleasant discoveries on this box set and a perfect example of why I still buy these things!

This entry was posted on September 5, 2017 by mathias42. It was filed under The Box Set Project, The Dead Walking, Uncategorized, Zombie, Zombies .