Destined To be Ingested 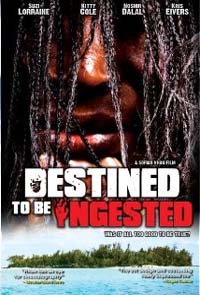 I’m at a complete  loss to figure out what the filmmakers were trying to accomplish with this one. It’s obviously a throwback movie, and there are heavy influences from Fulchi’s Zombie and Wes Craven’s The Hills Have Eyes here (I hear people say Cannibal Holocaust, but I really don’t see it….I think they’re reading too much into the title), with the setting, and the dubbing but beyond that I’m not sure what they were doing. If they were going for horror, they failed. It’s not scary in any real way. If they were going for parody, they also failed there too – it’s not funny or clever. It’s not really an exploitation film. At best it’s a hollow imitation of a grindhouse movie, but without the exploitation elements that keep those interesting.

A group of tourists on a boat end up on a deserted island. Sometimes there are cannibal natives (The whitest, most Caucasian looking barbarians this side of Iowa).  One of the natives takes a shine to one of our characters and about halfway though it turns into a weird cannibal lifetime channel movie… Yes, I realize, this sounds inconceivable. Imagine my disbelief as I watched. Especially when the undead zombies arrive in the last ten minuets.

There’s no character development, and these people don’t really even have the substance of caricatures. The kills are uninspired and uninteresting. I’ve seen student films do far better with far less.

Perhaps the title should have warned me, but I’ve seen plenty of good movies with dumb titles. This isn’t one of them. I’m going to say just flat out skip this one.