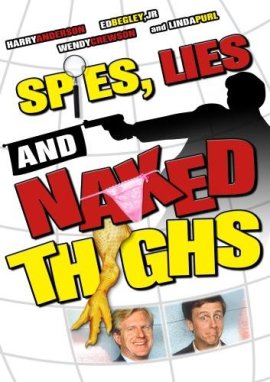 I’ve always been a huge Night Court fan. IT was enough of an influence that I followed Harry Anderson over to Dave’s World, and sought out his early appearances, particuarly on Cheers.

I discovered this movie on the rack at a Dollar store and had never heard of it. But still, Harry Anderson and Ed Begly jr, directed by the guy who did the Mupper Movie, I’m in.

a short synopsis from IMBD;

In this spoof of spy films, Alan, a U.N. translator, and his kindergarten teacher wife, Beverly, get roped into helping foil a presidential assassination plot by an unlikely G-man-who just so happens to look like Alan’s old college buddy, Freddie. But before “Freddie” can finger the real hired-gun-a cold-hearted killer with a penchant for using kitchen tools to do the deed-he, Alan, and Beverly must first rule out some strange and unusual suspects!

How did this go wrong?

I think the fundamental disappointment here is that Harry is out of his element. Anderson is funniest with his particular type of schtick. It dosen’t have to involve magic, but he does had a specific brand of humor and this isn’t it, it feels like they tried too hard to shoehorn him into a role he wasn’t right for.

To be fair, Begly gives an uninspired preformance as well so Anderson has nothing to really play off of, but the entire thing just feels flat and drags on too long.

With only a couple of cute set pieces, this one is actually a pass. You can find the best bits on Youtube, but even that may be too much trouble…