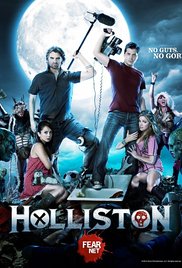 I’ve mentioned before that Adam got his start doing comedy, especially during romantic comedies but also stand up and sitcom kind of work. Holliston is a sitcom that is described sometimes as the big bang theory for horror fans.

It’s semi autobiographical in the way that my Violent Blue is – that is to say a lot of the events and situations happened in one form or another but have been so dramatised and fictionalised dad you can’t rightly refer to it as a non-fiction any longer. Things are tweeked for comedy and heightened for the best plot  – along with certain fictional elements and ideas thrown in out of nowhere.

It’s  cheesy and cheap and it shows. I stress this, I have to point this out because you have to know this going in. If you expect this thing to look like “Friends” then you are going to be seriously upset. Still, it’s strength isn’t so much in the production values as it is in the characters that you genuinely connect with the characters Adam and Joe and Corey and Laura, and that makes you forget the terrible looking robot cat, or some of the sillier gags, or the extremely clumsy attempts to break the fourth wall. That’s the thing about Holliston, it has so many technical imperfections that are just glaringly obvious, and yet for some reason it endears itself to the viewers despite all of these shortcomings (and it’s definitely DESPITE these shortcomings, not because of them…).

When I met Adam Green at Days of the Dead a few years ago he was on a publicity tour for Holliston. Seriously, I had not even heard of this show. It was nowhere near being on my radar. Even after meeting Adam I wasn’t quite sold – what did it for me was seeing the Holliston panel, and watching Adam along with Derek Mears and Dave Brockie laughing it up on stage and really selling the show. To the best of my knowledge, it was Dave Brockie’s last convention appearance – I am incredibly grateful that I got a chance to meet him. By the time I got on to him, he was out of the Odorous Urungus costume and in some ways that’s a bit of a drag, but in other ways….

See, if it had been Odureus, I would’ve approached him differently. We would have joked and gotten the picture and that would be it.  But I didn’t meet Odorous, I met Dave. We chatted about radio and how Danny Bonaduche  was constantly referring to GWAR as his favourite band – Dave seemed taken aback by that… “I love Danny Bonaduce… “He said in slight awe. Dave was friendly and charming outside of the costume and I’m very glad I got to meet him. He was the epitome of my own philosophy for sitcoms where what you need is a pretty girl some good friends and a smart mouth puppet. Dave was such a smart mouth and could not have been more of a cartoon… Not even in the animated episode – ha ha!

Houston is available on DVD and Blu-ray, and eventually it will be streaming somewhere… But the time you read this it may have already shown up on geek nations website. (remember I write these things months, if not years in advance) it’s definitely worth checking out.I remember I found it a little difficult to get through at first, but it didn’t take long for me to be hooked – waiting each week for new episode (which I would watch legally every week streamed off of fear net website) It’s addicting, and it’s amazing how easy it is to invest in these characters start it’s an even more amazing how the investment in these characters washes over to these people – these actors, and Adam Green himself. That’s important to remember, as we explore Digging up the Marrow next month.