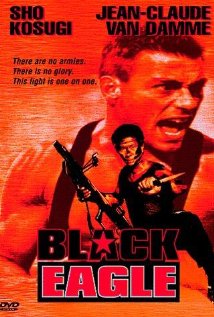 It’s always weird to see VanDamme as the bad guy. Even in the Expendables, it just didn’t feal quite right that he was the villian.

I encountered the trailer for this film in front of another movie I was watching and was intrigued enough to seek it out (after all, isn’t that what trailers are for?).

Here’s what IMDB has to say about it:

One of the US Air Force’s most modern tactical aircraft, an F-100 with a new laser guidance system, crashes into the sea near Malta – a region where the Soviet forces are highly present, too. The CIA immediately sends out their best secret agent, Ken Tami, to salvage the system before it falls into enemy hands. To ensure his loyalty, they bring his two young sons to a nearby hotel on the island. Ken Tami’s tough opponent is KGB agent Andrei.

Okay, seriously, even this is too much description for this film. There’s really no plot here, just oone fight scene after another, painted against a backdrop that must have seemed timly at the moment, but now dates the film and locks it in a specific period.

It’s not a bad film, just a brainless one. If you’re in the mood for high kicks and have to complete you Van Damme collection, check it out.

This entry was posted on November 23, 2017 by mathias42. It was filed under Forgotten Film Vault, movies and was tagged with Black Eagle, Jean Claud Van Damme, Van Damme.