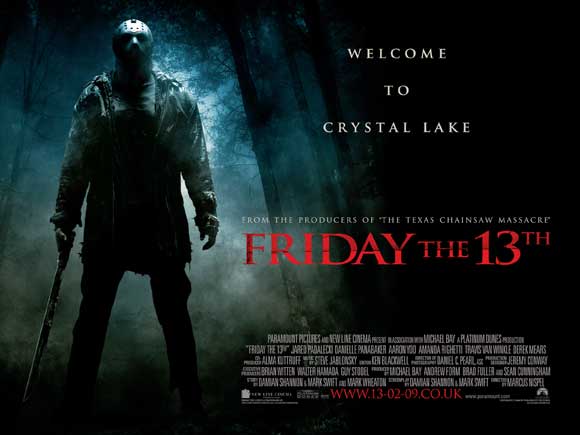 There so much that’s right about the Friday the 13th remake that almost seems a shame to have to reboot it.  But the really big thing that bugs me about this one is the massive amounts of sex and nudity. I realize these are staples of the franchise, and probably concept behind reboot is to take things up a notch. Really you can take the balance up a notch here but explicit drug use kind of bothers me A bit and the sex and nudity really crosses the line into Softcore porn. Actually they don’t even bother with the borderline they want straight over the border and camp into that territory. Really the only way that I’m comfortable watching this again is on an edited for TV versio.

One thing that really seemed to bother fans here was the way Jason moved. Dereck Meres is a fine stuntman and a good actor in its own right but here I imagine that he was just following direction. This is of course, a new Jason, platinum dunes version, but it’s a distinction I don’t think the casual fans notice. It’s just one of the things that will serve to piss off the faithful.

How do we fix this> First and foremost, bring back Kane Hodder – this is something the fans have been clammering for since Freddy Vs. Jason.  I think the origin bit with the mother straight beginning was well done Jason much like superman and Batman doesn’t need his word story retold again and again,  but tone down the sex to a point where I would be comfortable watching with this son or daughter and to push Jason  more towards body language that the fans (that you’re making this film for by the way) would appreciate more would go along way towards building up goodwill here.

Sadly I think we’re headed in the other direction as the studio seems adamant on releasing a found footage JasonNevertheless we still have the originals and I think I’ll go Pop in Jason x right now .