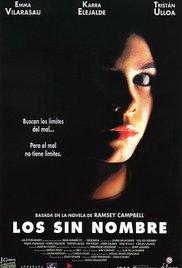 The nameless is a study in not enough. It’s a  slow moving story and every element in it (many of which I like) are as underused as that the name is.

It is the story of a woman whose daughter is lost . The first have hour evolves just like any average episode of Law and order or CSI. Police discover the body, theres an investigation, Case closed.

Everything changes when the mother receives a phone call from what sounds like the deceased daughter and she begins to suspect that the body found was not the right one. The story progresses further with the revelation of a  further investigation from both the detective on the case and the reporter from the local tabloid rag. The story really doesn’t pick up though until we’re about halfway through the film – right around the 45 minute mark. It’s a struggle to get here.  Once we start getting into the idea of the cold and investigating the only non-member, things do you start to pick up – there’s an interesting narrative here, it’s just woefully under used. The idea of a cult is inserted at the last minuet… I’m sure it was fleshed out in the writers mind, and we’re told about it, but we see so very little of it – it falls woefully short of the excitement and interest that we get from say, the old 70s Hammer horror where the Satanic cults are in full diabolical display. It seems to me that they’re trying to go for more of the suspenseful atmosphere perhaps, but they don’t quite achieve it – the story just drags, and I feel as if I am watching any procedural cop show on television, just with a teensy bit more blood… Maybe not even that.

Towards the end we get a brief glimpse of one of the characters tortured. It’s the sort of thing that we appeal to the saw crowd, but again it’s just the clips… Not enough of it to be engaging in a torture porn  sort of format. The ending feels like it’s reaching – like it wants to be innovative, esoteric, but it really fails to deliver that I want away from this movie rather disappointing, not because of the bad film, but because I can see t he potential in it for a much better one. This isn’t even as good as the ones on late night TV – it’s perfectly at home in a bundle box set like this, but otherwise nothing to see here, move on…

This entry was posted on February 6, 2018 by mathias42. It was filed under Horror, Horror Movies, Masters of Terror Vol 1, The Box Set Project, Uncategorized and was tagged with The Nameless.